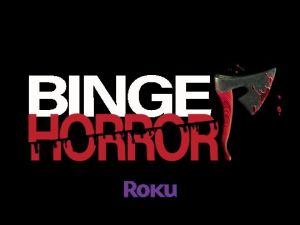 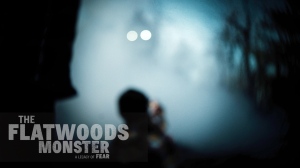 Did a UFO crash land in a rural West Virginia town in 1952? New eyewitness testimony obtained by a film production crew would seem to indicate it did. In a new documentary titled, The Flatwoods Monster: A Legacy of Fear, two of the only living witnesses to a strange, mechanical being exiting a bizarre craft will have the chance to tell their story. The Flatwoods Monster: A Legacy of Fear is a new documentary from director, Seth Breedlove (The Mothman of Point Pleasant) which will unlock a decades-old mystery that included a government-ordered military examination of a purported alien crash-site, and multiple UFOs seen by countless residents of Braxton County, WV. The film was at the center of a wildly successful crowdfunding campaign that earned over thirty six thousand dollars through Kickstarter and will see a wide streaming and DVD release by award-winning production company, Small Town Monsters.

The “Flatwoods Monster incident” has become one of the most famous legends in modern memory. However, with the Pentagon now opening up about UFO investigations dating back to the 1940’s, the incident can be seen in a new light. In September of 1952 hundreds of people across the United States witnessed glowing objects streak across the skies over much of the Eastern Seaboard. One of the objects in question was seen to land on a hill near the small community of Flatwoods, West Virginia by a group of children. The children and two adults made a journey to the top of the hill to search for the object but instead found themselves face to face with a thirteen foot tall mechanical monster. Later that same evening a branch of the local National Guard unit would be dispatched by Air Force officials to investigate the site of the encounter.

The official premiere will be held at the Elk Theater in Sutton, WV on April 7th with members of the Small Town Monsters crew taking part in a Q&A following the showing.

The film is being released by the award-winning, production company, who are responsible for last Spring’s, “The Mothman of Point Pleasant”; another documentary centered around a well-known West Virginia legend. The film features an original score composed by Brandon Dalo and cinematography by Zachary Palmisano with special FX by Santino Vitale and fully animated sequences by Chris Scalf.

The Flatwoods Monster is now available on DVD and streaming on Amazon and Vimeo OnDemand with a wider digital release planned thereafter.

A trailer for the film can be viewed at https://youtu.be/OS0j_aICa70

To learn more about the movie, as well as other “STM” productions visit Home | Small Town Monsters

This week you’ll definitely want to stay after class at Full Moon’s Voodoo Academy. At the prestigious Carmichael Bible College, the faculty have some very unwholesome intentions for their students. Will the newest student fall victim to their evil plan or will he graduate with his soul intact?

Then turn on, tune in, and drop out with Alice in Acidland. This psychedelic gem from our Something Weird catalogue reveals the damaging effects LSD has on the morals of Alice Trenton, an all-American college student turned drug-crazed sex kitten who plunges headfirst down the wrong rabbit hole!

And you won’t want to miss Jess Franco’s The Blood of Fu Manchu. The legendary Christopher Lee stars as a madman who sends 10 beautiful assassins, armed with a deadly poison on their lips, to deliver a “kiss of death” to powerful public figures.

On Thursday stop by the FullMoonStreaming The Vault for Volume 3 of our behind the scenes footage from Evil Bong 3: The Wrath of Bong. So hang out with the cast and crew (and Eebee, of course) as they create Full Moon Feature’s galactic stoner-horror comedy! PLUS we’re offering a FREE 1 Week trial to anyone! So spread the word and give the gift of FullMoonStreaming.com to all your friends and family. Post on Facebook and Twitter and wherever you can about this offer. 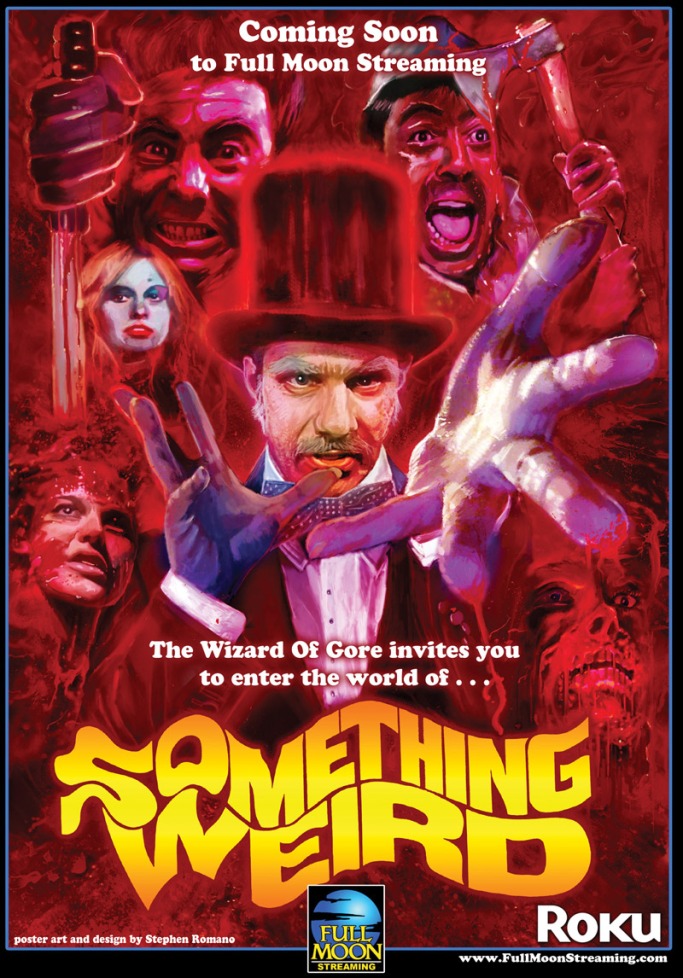 Full Moon is thrilled to announce the latest addition to the FullMoonStreaming.com roster: an untamed collection of classic cult, horror and exploitation movies culled from the legendary SOMETHING WEIRD library!

The brainchild of late exploitation film curator and weird cinema enthusiast Mike Vraney (who tragically lost his battle with lung cancer earlier this year), SOMETHING WEIRD is widely recognized as the premiere imprint for awesomely lurid, cult cinema. The company has thousands of bizarre and wonderful motion pictures under their umbrella, representing every single strain of strangeness from greasy, hard and soft-core erotica to tassel-twirling burlesque; from European gladiator epics to gory horror gems; from druggie freak out potboilers and beyond. Simply put, in the annals of exploitation film culture, SOMETHING WEIRD stands alone. Check out all the details and preview this collection of rare and bizarre films HERE. 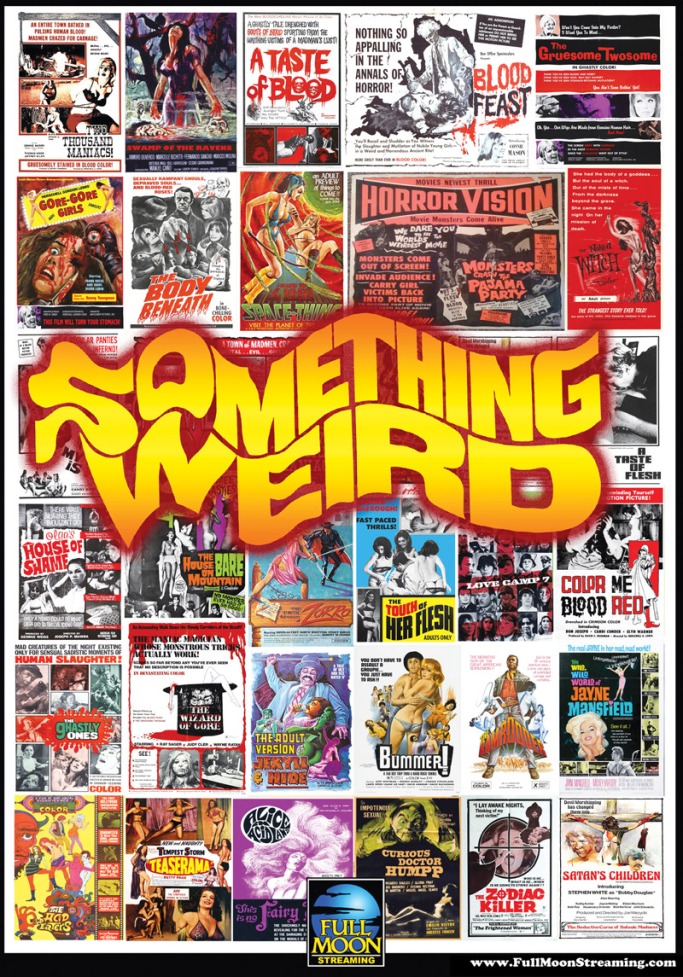 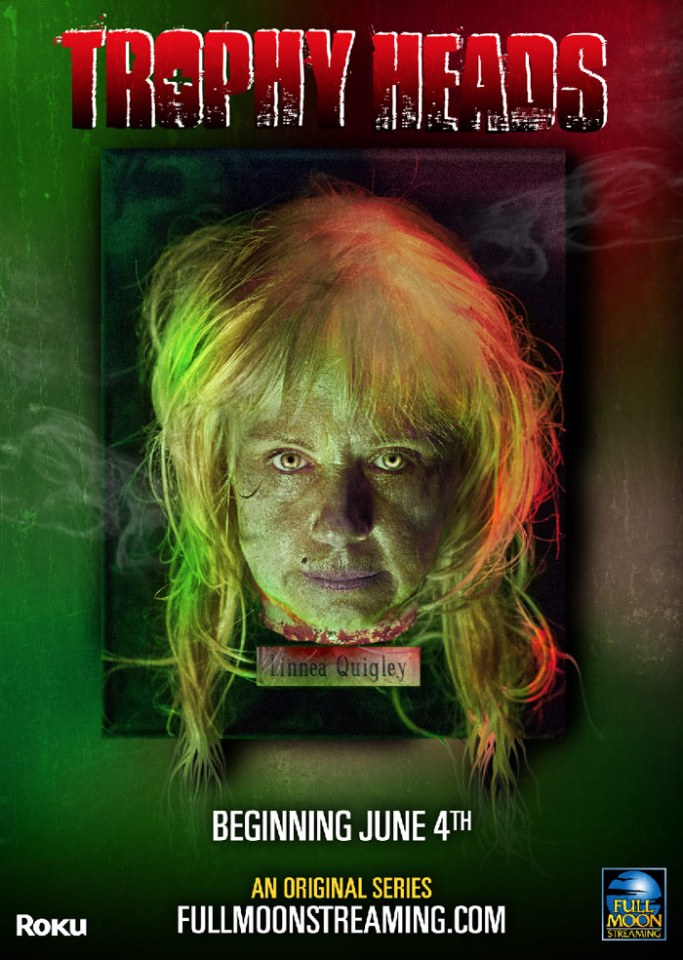 Witness the amazing and revolting reveal of legendary Scream Queen Darcy DeMoss. This is the very first look at…

January 14th, 2014 – From the fevered mind of maverick cult movie mogul and Full Moon Features President Charles Band comes the triumphant return of the brand that first brought oddball shock to your living room: Wizard Studios presents a triple shot of indie shock!
WIZARD Studios is an evolution of Band’s iconic WIZARD Video label, the home video imprint that blazed trails in the early 1980’s, bringing the world’s weirdest horror, fantasy and exploitation films to audiences everywhere via big box rental and sell-through VHS. Now, inspired in part by the unprecedented success of Band’s Full Moon Streaming initiative (www.FullMoonStreaming.com), WIZARD Video has been reborn, this time as WIZARD Studios, an exciting acquisition program and distribution outfit designed to spotlight rising independent filmmakers and their cutting-edge genre pictures.
After receiving a staggering level of submissions since the announcement in December 2013, the WIZARD team have screened all of them and are proud to announce the movies selected for the first wave of release, including:

VAMPIE (Dir:Melissa Tracy and Markus Innocenti, premiering February 14th, 2014)
By far the most far-out of the inaugural WIZARD lineup is filmmaker/actress Ming Ballard’s deranged and hilarious horror comedy VAMPIE, in which a neurotic vampire named Azure (played by Ballard) betrays her allergy to blood by finding sustenance in the plasma pastry of the title. Ballard is said to be the first Asian-American woman to star in and produce her own film with widespread distribution.

VILLANELLE (Dir.Rick Laprade, premiering February 28th, 2014)
This jet black and atmospheric shocker is a masterclass in making a massive impact with very little money and plenty of style. In it, an alcoholic detective gets sucked into a nightmarish world when he finds a girl, nearly dead and with dark secrets that slowly alter his perceptions of his own reality.

All three films will premiere EXCLUSIVELY at http://www.FullMoonStreaming.com with select DVD releases soon to follow.

“We’re incredibly excited to re-launch Wizard Studios as a portal to spotlight the best in new genre filmmaking talent,” said Full Moon Features and Wizard Studios founder and president, Charles Band.
“These first three films offer the kind of go-for-broke indie spirit that we at Full Moon have forever championed. Each one stretches their respective budgets and offer the kind of weird, witty and out-there aesthetic that the mainstream just cannot and will never deliver. I can’t wait for fans to check them out!”

WIZARD Studios is an interactive distribution initiative in which fans and filmmakers support each other. Visit http://www.FullMoonStreaming.com/wizard for details on how you can submit your film and be part of the new WIZARD Studios cinema streaming and distribution program!
WIZARD STUDIOS: A CLASSIC BRAND. EXCITING NEW MOVIES.
———–
For over four delirious decades, filmmaker Charles Band has steadily pumped out a dizzying wealth of some of cinema’s weirdest and wildest horror, fantasy and exploitation genre movies with his iconic labels “Empire Pictures” and “Full Moon Features.” Along the way he has nurtured and enabled such talents as Stuart Gordon, Barbara Crampton, David Schmoeller, Demi Moore, Michael Pataki, Helen Hunt, Viggo Mortensen, Christopher Lee, Tim Thomerson, John Carl Buechler, Don Mancini, Timothy Van Patton, Jeffrey Combs, Michael Moriarty, Andrew Prine, Klaus Kinski, Sherilyn Fenn and hundreds upon hundreds of others in films as beloved as TOURIST TRAP, RE-ANIMATOR, GHOULIES, DOLLS, FROM BEYOND, PARASITE, PUPPETMASTER, SUBSPECIES, HEAD OF THE FAMILY and THE GINGERDEAD MAN. Many of these pictures are considered bona fide classics and some even cited as landmark dark fantasy entertainments.

For every Full Moon movie that’s ever been produced, many hours of footage were shot that never made it past the editing room floor…until now. The Vault offers Full Moon Streaming viewers an unprecedented look deep behind the scenes of our films. These aren’t the slickly cut and tightly edited VideoZone segments that you’ve come to know and love. This raw video footage consists of excruciatingly detailed recordings of the day-to-day life on movie sets and features deleted scenes and unused interviews that didn’t quite make the cut into the final release. None of this footage has ever been seen anywhere else before. If you’ve ever wondered what it’s really like to make a Full Moon film, take some time and dig around in The Vault!

During this Black Friday Weekend sale, it’s only $18 to get full access to FullMoonStreaming.com for 3 months, plus our free gift of 3 DVDs or Blu-Rays. And domestic shipping is FREE! This offer starts Wed Nov 27th at Noon PST and ends Mon Dec 2nd at Noon PST.

(International subscribers may still claim their 3 free DVDs or Blu-rays, but must pay for shipping. We will reach out to you to charge shipping after you’ve signed up for $18).

(This offer is for NEW subscribers only! If you’re already a subscriber, you are not eligible for this offer. We need more subscribers so can bring you even more cool stuff!)