Brightburn (On Demand) – Spoiler alert people imagine if Superman came to Earth and was raised on a farm and instead of thinking he is supposed to save humanity? He is to rule and destroy them all. At first he doesn’t want to hurt anyone but soon the voices in his head convince it is time to fuck everybody up. Wasn’t expecting a lot but it entertains and I enjoyed the ending since it wasn’t your cookie cutter happy ending that a lot of people tend to expect. I give it 2 stars. The film isn’t bad, it wasn’t good, just one of those you will forget quickly.

Unholy Rollers (DVD) – A forgotten early 70s film starring Claudia Jennings in a roller derby film produced by Roger Corman. Claudia plays a woman named Karen who has just quit her cat food job because she is tired of all the sexual harassment and wants something different in life. Along comes the local roller derby tryout that is looking for fresh faces and like wrestling is popular and pre-determined. With two other people out of many Karen is hired for not just her looks, but spunk or as the roller derby owner kept saying sportsmanship! Karen becomes a quick hit with fans which means money and fame but also jealously among the teams as they don’t like Karen looks down on them. As quickly as Karen gets big in the sport she burns out in the big climax of the film where she just goes batshit crazy. Fun 70s movie stuff that never gets old as I give it 3 ½ stars. 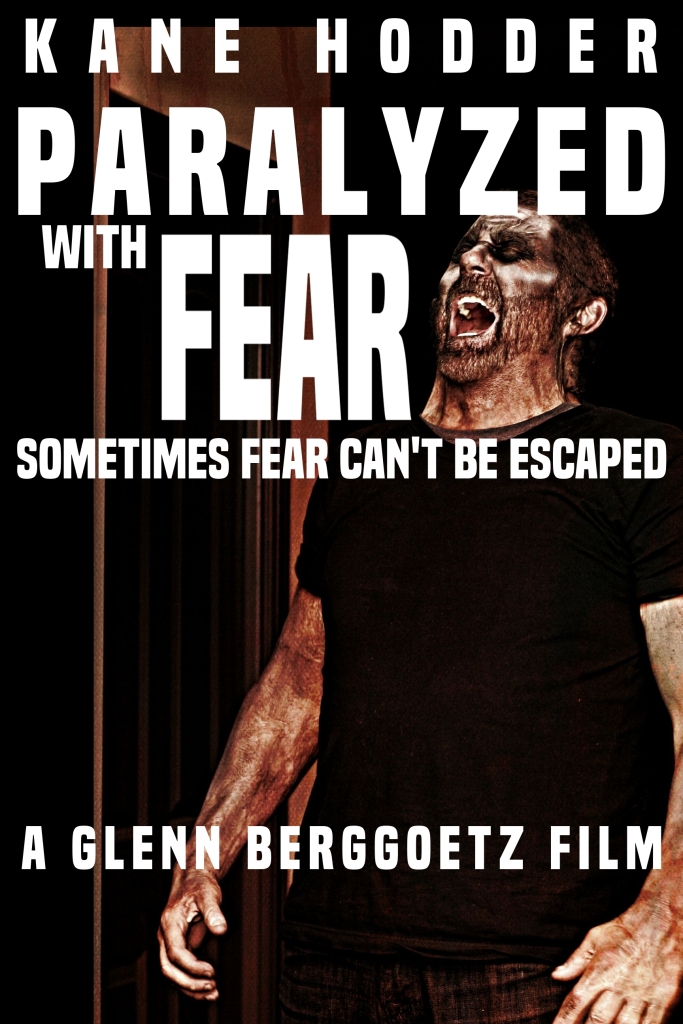 Paralyzed With Fear (DVD) – Mr. Glenn Berggoetz is back with another tale of horror as Glenn doesn’t just stick to one genre proving he is a talented independent filmmaker that keeps you guessing. This time around in the opening scene a woman and her husband are in a serious car accident that has her husband die from his injuries. Unhappy and depressed her daughter Hannah worries a lot until she comes up with an idea with her girlfriend to maybe talk to the dead. Hannah believes if they have a ceremony or séance with her mother they or her mother could talk to her dead husband to help his passing and she could move on. Hannah convinces mom it’s a good idea and they do it believing they have made contact with the dearly departed love one. But they learn the hard way sometimes the dead should stay dead as an evil spirit played by an iconic figure Kane Hodder as the ghastly demon has decided to haunt them. Hannah’s conjuring ceremony is not what she expected but it’s way too late as she is deceived also by the evil spirit. A simple creepy paranormal movie that proves you don’t need the latest technology or appeal to the teens’ bottom line to pull off a scary flick. It’s also fun in the manner that Kane’s devilish voice and appearance brings back delightful memories and feelings I have watching “Prince of Darkness” and for that I give Glenn’s new feature 3 ½ out of 4 stars.

Back Again (DVD) – A newer independent filmmaker David Bachmeier to hit the scene has his latest short film that takes on a serial killer and has a cool intro from the legendary Glen Colburn. Tommy Lee Jarvis is a brutal serial killer who has been gunned down by authorities and buried. A drunken doctor and his assistant have taken it upon themselves to dig up his fresh corpse for their experiment. Biggest problem is their formula works and the undead killer is back for another horrible murder spree! I like the premise, I like the gore, the short is a little rough but I did enjoy what David had accomplished and look forward to his future projects as I give it 2 ½ out of 4 stars.

Shaft (On Demand) – So this film wins the award for a project I didn’t see happening in 2019 or anytime soon. Bottom line Shaft has a kid and he needs his absentee father’s help in a case of a friend who may have been murdered. Figured a sequel like this would dumb and uneventful but instead is unforgiving, hilarious, and most likely the most politically incorrect movie of 2019 and thank the lord Rutger Hauer for that. Well casted and make fun of millennials for almost two hours straight I am in as I give it 3 stars.

Funland (VHS/YouTube) – David L. Lander is Bruce Berger the clown who happens to be the mascot of a big theme park called ‘Funland’. Berger is the annoying clown that everyone puts up with because he has been there from the beginning but things change when the original owner of ‘Funland’ supposedly commits suicide. Here comes an Italian family taking over the park and using it as a front. Of course Bruce cannot take this and completely snaps to the point he talks to wax statues, he was already talking to his puppet, but also plans to shoot the national Bruce Berger clown they are bringing in for opening day. Thinking this movie over you can easily sit back and say this movie is about a man with mental illness that has a complete breakdown and here is the result. Or the later I have a feeling everyone from the producers, to the writers, to the director was unsure of what kind of movie they were going for as the film isn’t real funny and has a couple very racy scenes. I give the film only 1 star but if you are a weird film buff you may want to go down the rabbit hole of finding this for a watch?

The Keep (DVD) – It is 1941 and Nazi soldiers are sent into the Romanian mountains to investigate and guard a mysterious place called ‘The Keep’. The place was built for some unknown reason many years ago before WWII and Hitler thought of. The villagers there have been caretakers of ‘The Keep’ as long as they all can remember. But there are stories of people disappearing or not making the night there at ‘The Keep’. Of course the Nazi soldiers are completely fascinated by this legend and possibility of silver being in the labyrinth so go and disturb something ancient. A few days later and Nazi soldiers dying equally mysterious French man shows up wanting a room overlooking ‘The Keep’. Thus awaiting a battle… The film isn’t great but an interesting piece of cinema from Michael Mann who was very popular in the 80s as there are stories of the film plagued by problems that include the author of the original story claimed it had nothing to do with his story. There is a rumored 200 minute plus cut of the film!!! Interesting soundtrack by Tangerine Dream… The film is good vs. evil using the Nazi power at its height as the backdrop but I believe never comes close to being what it could have been? This is one of those flicks that are more popular for what happened off screen than what happened on screen but I still give it 2 stars because I am a Scott Glenn fan.

Phantom of Death (DVD) – A less talked about Italian film from Ruggero Deodato that is a thriller about a famous pianist. Michael York plays the pianist but it seems immediately death surrounds him as a string of murders are quickly connected to the pianist by police inspector Donald Pleasence. What’s weird ten minutes in the police inspector knows who the killer is but no one believes him. And to the viewer it becomes quickly clear who it is as the pianist discovers he has a rare incurable disease that sends him off the edge of playing cat and mouse with the inspector! He goes around the Italian countryside playing a game of death always being one step ahead of the inspector. As the illness continues to get worse the crazier Michael York’s character gets. It wasn’t really impressive but one of those horror flicks I cross off my “must need to see” list as I give it 2 stars.

This week we welcome back our good buddy Jon Cross to the show to talk about one of our favorite subjects DONALD PLEASENCE in HALLOWEEN 6, TREASURE OF THE YANKEE ZEPHYR, and DOUBLE TARGET.  We also chat about missing Rutger Hauer in the new Blade Runner flick,  A brief history of The X-Files, Kyle falls down a Verne Troyer based YouTube wormhole, Vietnam flicks,  The awesomeness of Paul L. Smith,  Mothra hatred, and most importantly DONALD god damn PLEASENCE!!!!

This week Tim and Kyle get together to discuss a movie that is a hotly contested subject out there in internet land in THE SHAPE OF WATER.  Also we chat about a flick that could be called Victorian Ghostbusters in WINCHESTER.  And a flick about a killer clown before the glut of killer clown movies that we are getting now these days in AMUSEMENT.  Also we discover Kyle’s extreme hatred of Michael Shannon, Destroyed bathrooms, CHUDS, and other nonsensical garbage.  So enjoy!