This week we review the biggest movie of the summer in GUARDIANS OF THE GALAXY Vol. 2.  And Kyle talks about the finest example of truckersploitation in CONVOY.  Then Tim talks about a film with one of his favorite guys of all time in it Mr. Donald Gibb in JOCKS.  Also, we answer your questions that come through Facebook live. And a ton of other nonsensical bullshit.  So please check it out.  Do it for Rubber Duck!

This week we welcome our good buddy JON CROSS back to the show to talk about Eric Roberts (and his mullet) in the awesome, and no so talked about, Larry Cohen joint THE AMBULANCE.  Then Kyle picks an action flick that has the best cast of B list dudes in NO ESCAPE (an action flick that Jon has never seen to our surprise) and finally we discuss a flick that was a staple on USA up all night in CHOPPER CHICKS IN ZOMBIE TOWN.  Also, We answer all your questions, talk about Horror Realm memories, and have a general, all around good ass time.

This week we discuss two new flicks.  One of which is one of the worst pieces of trash we’ve picked for the show.  The first being a movie that promises you a Sasquatch but doesn’t deliver a sasquatch in SCREAMS OF A WINTERS NIGHT.  And the second we venture out to the theater to check out ALINE: COVENANT.  Also Baseball chats (because that’s exciting) Kyle tells the story of the time he shit his pants, what we’ve been watching, news, and SKEXIES….

This week we talk about one of Kyle’s favorite actors Crispin Glover in one of the best remakes this side of The Thing in WILLARD.  Then Tim picks an early entry in the slasher genre that neither of us has ever seen in THE DORM THAT DRIPPED BLOOD.  We answer questions, join Facebook live, and whatnot… so; listen or rats will eat your flesh

The Watcher in the Woods (VHS) – So I decided to sit down and watch this nonsense from 1980 where two sisters and their mother go to buy an old house off an old lady. The old lady thinks the older daughter is her daughter Karen from years ago that disappeared and talks to the woods every once in a while. The younger sister is played by the girl who played “Lindsey” in the horror classic ‘Halloween’. So of course the rest of the movie is spent me being Tommy Doyle behind the curtain trying to scare Lindsey until the alien shows up and returns Karen! Don’t worry you are not missing much in this flick as I give it 1 star.

The Dorm that Dripped Blood (Blu-ray) – I watched this slasher flick for the first time ever! Not totally sure how that happened but never got to see this flick until I picked up that ultimate Synapse Blu-ray. The movie was also known as “Death Dorm” and “Pranks” during the early 80s after its 1981 release. The film’s other memorable trait besides its artwork and titles are a young Daphne Zuniga showing up for five minutes and being a part of an awesome death scene. A generic story for “slasher film” standards but during Christmas break Joanne is in charge shutting down a dorm building and boarding it up. Meanwhile a fuzzy-haired dude that looks like an extra from ‘Slap Shot’ keeps doing a peeping tom routine. So of course soon as the bodies begin to pile up in gruesome fashion the fuzzy-haired dude is to blame. An odd ending to the generic story made me a little underwhelmed by the film but still glad I bought this great edition on Blu-ray. It isn’t: My Bloody Valentine, The Burning, Curtains, maybe even The Prowler but still glad to add it to my collection as I give it 2 ½ stars. 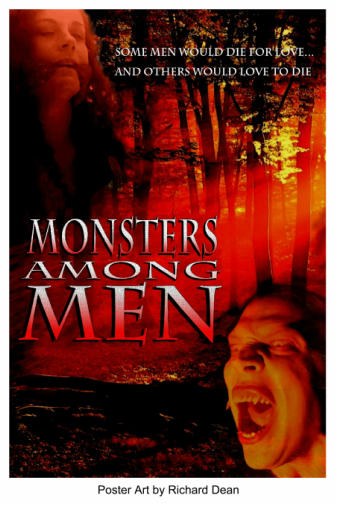 Monsters among Men (Blu-ray) – A dramatic independent horror film about a couple named Reed and Allison. Reed takes his woman out for a walk near the woods to pop the question. As she is saying no something happens to Reed wear he wakes up in the woods next to a dead guy and another dude digging a grave. Reed escapes and wonders who, what, or where is Allison? He comes to find out she has been abducted by a vampire because she is supposedly a “pure blood source”. Meaning vamps can gain extra strength from her blood and she has no disease. So Reed plans his revenge against these mobster-like vamps and help Allison escape as he still loves her. Most independent horror films that focus on vamps usually flake out by the ten minute mark to show a ton of boobs or lesbians. This isn’t a bad thing but it is always nice to see filmmakers like Ryan Blazic take a chance and make something more? For that I thank Ryan and his crew as I give the film 2 ½ out of 4 stars. Found out more or to purchase the film at www.monstersamongmen.com .

Monsters: Dark Continent (Blu-ray) – A region B Blu-ray I picked up because I wanted to see the sequel but was really intrigued with the aliens/virus whatever you want to call them. Ten years later the contingent is still being fought but is now a part of everyday life especially in the Middle East. U.S. troops must not only fight off insurgents they must also shoot down the monsters as they run rampant in the dessert. Again I enjoy the concept of the “Monsters” but I think the writers and filmmakers miss the point of what this could be? The film is more about war than the monsters and makes you question are the writers and filmmaker trying to make a statement or a possible cool concept? Either way I believe this film and the original could be much more (Aliens franchise for example) but with the lack of interest in the US for the films and money needed to make the films this was most likely the last sequel we get anyway. I give the concept 3 or 3 ½ stars but the movie only 2 ½ stars.

Thirst (DVD) – Just a simple creature feature where troubled teens are sent to a boot/wilderness camp of sorts in the middle of the dessert for a week. Once there a metallic space alien arrives and begins feeding on the teens until they figure out a way to fight back. Think of “Ticks” with Seth Green from the early 90s on maybe even a lower budget. I may have enjoyed the simple creature flick but I do know Project mother fucking Metalbeast would have made this film that more interesting as I give it 2 ½ stars.

Presidents Day (Vimeo/DVD) – So you haven’t gotten all your holiday horror films fill yet? Well don’t regret it as another has been made that focuses on the Presidents Day weekend. I believe college kids… but not a major plot point are on their way to an old hunting cabin to celebrate Presidents Day weekend or just to get drunk. The kids are all your usual stereotypical slasher movie characters and they even point it out during the movie. They just happen to piss off the dead that just happen to be all the dead presidents or zombie versions of them? Anyhow the film is kind of slow and you feel like this is the usual independent crap that gets floated out there on a regular basis but it isn’t! Believe me give it a chance to get going as once the presidents are all up shambling or running around trying to kill the kids hilarious shit begins. Whether it is the bad puns, one of the dead presidents having sex with Ashley and then there is duel over her, or the presidents from the 1800s having a wrestling match after finding out there was a black president I absolutely couldn’t stop laughing. The independent flick doesn’t try to be hipster cool or reinvent the motion picture it understands it is a very low budget flick and uses it to its advantage. Oh there isn’t much plot but when a dead John Wilkes Booth arrives to help the kids kill Lincoln it is all so wrong but right and hilarious at the same time! Presidents Day is a fucking blast and I will debate myself on whether it will make my ‘Best of 2017’ list? But until then I give it 3 ½ out of 4 stars and can be found at www.midnightreleasing.com .