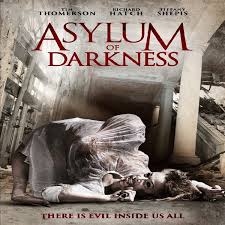 Asylum of Darkness (Vimeo/VOD) – We have a film about a lone man named Dwight who questions if he is insane, if things are real, etc.? All Dwight knows he must get out of the asylum and back into the real world because he believes he is not insane. The time comes, Dwight breaks out and tries run away from his craziness… maybe. But witnessing a car accident and helping the driver inside Dwight takes over a man’s life (Art Finsch). On the inside its Dwight, on the outside it is a man named Art: author, womanizer, crappy marriage. Dwight measuring up or just trying to gauge his situation decides to try and fix the marriage and just enjoy his second chance at life. But whatever to the beautiful woman that visited him in the asylum, who is weird white-haired man following him, and what happened to the real Art Finsch? The movie can become a little confusing at times, feel a little long (close to 2 hours), but with the casting of genre vets Tiffany Shepis and Tim Thomerson in supporting but important roles the film can be quite interesting. Once the film ends you still question who is who or what happened or if it did? But it is one of those weirdo films that you should keep in the back of your mind when looking for something different to watch than a straight up horror flick. I give the flick 2 ½ out of 4 stars and more about it can be found at www.facebook.com/octobercoast .

District B13 – A kind of futuristic/post-apocalyptic film that involves a fitness craze of par-core (I think, remember my only exercise is drinking beer and watching weird flicks like this…) and martial arts and putting ‘Escape from New York” into 2010 Paris. Understand the film was made in 2005 and there is a sequel if you like this flick? A wall has been built around the ghettos of Paris to keep the gangs walled off from Paris and the police just hang there until they are given orders to leave before the government decides to wipe the area clean innocent people or not. Leito is just a bad ass dude who protects his sister inside ghetto B13 and throws drugs away from a gang that harasses him. Leito tries to do the right thing and the police do not care. Now Leito is in jail, the rival gang has his sister, and there just so happens to be a bomb in the middle of the ghetto that is going to kill everyone. So some elite officer Damien breaks out Leito for help to stop the “Clean Bomb”. The movie reminds of those direct-to-video movies and sequels to ‘American Ninja’ and ‘Kickboxer’ that came out in the early 90s. I give the movie 2 ½ stars.

Strip Club Massacre (Vimeo/DVD) – Megan is having a bad life right now. All in one day the beautiful Megan loses her job, her boyfriend to her rich roommate, and her place of living. Forced out she heads to Georgia to an old best friend’s place until she can get on her feet again. Once there her best friend’s boyfriend hooks her up with a waitress job at his strip club. Megan is warned the club is not your usual strip club and Megan is warned not to cross the main stripper “Jazz” played by Erin Brown aka Misty Mundae. Megan ignores and begins her job and just tries to make enough money to go back to school. Some weird things go down but Megan tries to push on. Megan gets invited to a employee only party and proceeds to be drugged and raped! Megan has had enough and goes on a murderous rampage in the strip club. Simple, bloody, lots of boobs, and the movie shouldn’t have lasted as long as it did. I give this flick 1 ½ out of 4 stars and can be found at www.braindamagefilms.com .

Miles Before Sleep (DVD) – Friends are taking a trip to the beach and they have problems just like normal people: who’s pregnant? Who’s the baby daddy? Why did we take the one friend that wants to see Kayne in concert? The friends are traveling through West Virginia and of course their car has a gas leak causing them to be stranded. The friends figure they better find some shelter for the night before some ‘Wrong Turn’ shit goes down. They find a nice dude and his girl in the middle of the woods that is basically living off the grid and keep to themselves. It is a simple life but at least they are not raping their sister… until you meet the relatives that were hunting or just raping their sister as usual. So the friends soon become part of dinner and must fight to escape because they are city folk! And city folk are sinners of course! I give the entertaining no budget flick 2 ½ out of 4 stars. You can find the flick from Michael Taylor Pritt at www.funtimeproductionz.com .

Are We the Waiting (DVD) – Apparently the draft have been reinstated and this unemployed all around good dude Chance has been drafted and ships out next week. Instead of going to fight for his country Chance and his girlfriend are going to run off to Canada to disappear but have one last party with friends. The friends get to the house for their online gaming party but things quickly change when decide to try a different gaming website that shows the party a severed arm. They all try to shut down and get some drinks only to find horrible crap in the freezer. From there it escalates when a brightly masked person has shown up and tries to kill them off one by one. Michael Taylor Pritt and crew are passionate about their work but haven’t hit that stride just yet. Meaning I may have not been impressed with this movie but know their best is still to come which is good for all fans of their work as I give this flick 2 out of 4 stars. You can this at www.funtimeproductionz.com .

Legend of the Drunken Master (DVD) – Probably one of the more famous of the Jackie Chan flicks is this feature about a man that knows “drunken boxing”. But this show of martial arts is frowned upon by most in the Asian communities because the person or persons are usually complete drunks and bring shame to their families. But Chan’s character swears off the art of fighting when his father kicks him out but eventually becomes involved a company man who is looking for an artifact that will fetch him lots of money but is mistakenly switched for ginseng which were in the same box. More than anything this film shows off Jackie Chan’s talent and knack of what was to come and show American audiences something they have never seen. I give the flick 4 stars.

Evils of the Night (Blu-ray) – College-aged kids are at the beach to party and have lots of sex until some of them go missing. Some aliens have visited Earth as old people who are tracking down young good looking people between the ages of 16-24 to get their blood. They need it to survive. But in between all the sex some of the kids have become concerned and try to find out what is happening to their friends? Running for their lives or just being harassed by a couple old mechanics the movie doesn’t make a whole lot of sense. But it’s the 80s, the film stars Julie Newmar, John Carradine, Amber Lynn, we have the millennium falcon on the poster, the film was called “Demon’s Blood” at one point, and some people believe this film was started as a porno? For that I am thankful I track this film down. The new Vinegar Syndrome Blu-ray is packed with all kinds of cool extras including the alternate feature-length TV edit version of the film! I give the film 2 stars.