We return and this week we have more movies and madness to talk about.  First watch Joe Don Baker crash cars and make out with Susan Sarandon in CHECKERED FLAG OR BUST.  Then a movie only Tim Gross could find in DISGUSTING SPACE WORMS EAT EVERYONE. then we chat about a movie that is a truly hidden gem in 2020’s THE CURSED.  And finally we have to talk about this week’s installation in the Amityville saga in AMITYVILLE DOLLHOUSE.  We also get into what we’ve been watching, Kyle’s total addiction to Elden Ring.  Misty Mundae and her lousy movies.  And a whole lot more.  So download this episode or all your Cinemax soft core skin flicks will be deleted off your hard drive.

This time we return and we are bringing even more genre treats with us.  First we have the Shaw brothers bringing you a weirdo guy in a rubber suit monster mash in THE OILY MANIAC. Then it’s a made for TV. jam in MIDNIGHT OFFERINGS.  And finally DOCTOR SLEEP… because Kyle wanted to make 2 guys who hate the original Shining watch the sequel.  We also have many discussions about the proper freezing methods when it comes to your snacks.   Bruce Willis and his unfortunate illness. and everyone watches the new Spider Man flick.  We also read the newest news, rundown what we have been watching, and as always we answer all you listener questions.  So download this episode or Doctor Strange will banish you to the mirror dimension.

IT’S JOHN’S BIRTHDAY… And we are celebrating by doing the same old same old show.  As always we have 4 more flicks to talk about.  First we have an Ed Wood flick that was requested by listener Jody in JAILBAIT.  Then we have a slimy slime filled in BIO-SLIME.  And a really great 2020 jam in CENSOR.  And this week’s installment in the Amityville saga is Amityville Haunting.  Also we chat about the many ways to get and or avoid pinkeye.  Middle age poop flingers, Skyrim and Kyle’s addiction to Elden Ring. And Tim and Kyle run down their trip to Cinema Wasteland.  And as always we read your listener questions,  read the news, and rundown what we have been watching this week.  So download this episode or you’ll take an arrow to the knee.

Mitchell (DVD) – This cheesy 70s flick stars Joe Don Baker as a detective who seems to be a sleezeball but actually it just adds to his charm as a man just trying to do the right thing. Mitchell happens to be riding along with police who get a call for a burglar in a rich neighborhood. The burglar picked the wrong dude, Walter Deaney/John Saxon to steal from as Deaney was looking for an excuse to kill. Cops think its justice, Mitchell believes its murder. Mitchell decides to investigate for himself but gets thrown off the case to cover an old mob dude who may be tied to a heroin shipment coming in? Soon Mitchell becomes a target as he keeps meddling in both cases and they are connected. The film is one big cheeseball 70s flick that would be more interesting if we didn’t have two “Dirty Harry” flicks and a “Death Wish” flick out by the time “Mitchell” was released. I give it 2 stars. 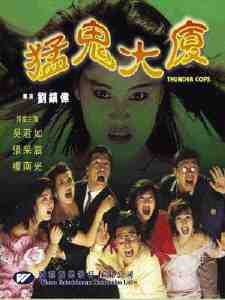 Thunder Cops (VHS) – If you cannot find this movie under that title supposedly the film was also called “Operation Pink Squad II” at one point? This hilarious 1987 action/comedy from Hong Kong is one of those: “How much B-movie crap can we throw against the wall and it actually stick”. And thank god for allowing this feature find me. An upset husband who believes his cop wife is cheating on him learns she is going to hook up with her superior. What he doesn’t know he keeps overhearing their plans to go undercover as hookers as part of a police sting at a haunted building. The haunted building has a crazy ass monk trying to keep evil spirits in their place. But a vengeful ghost escapes the chaos and now is causing problems with the sting going down in the building. Eventually the monk, the upset husband, the undercover cops all must defend themselves against a ghost head that flies! Let’s not forget the green turd, mini-copters chasing the ghost head, and possible castration to invite a powerful elf which kills ghosts? Like I said crap thrown against the wall but great crap as I laughed my ass off and give this movie 3 stars.

Ravenwolf Towers (DVD) – Jake is a new assistant manager at a run-down hotel that used to be cherished by Hollywood types years ago. Now, it is just a weird dwelling for older people mainly who don’t venture outside or talk to anyone but themselves. But Jake quickly learns there is many secrets to the hotel when he has to go the top floor to fix a leak and finds a helpless woman named Mary. He helps her out but her family comes looking for her and goes back to the top floor without a real explanation. This is a recent ongoing new series from Charles Band that gives life to a project that has that old school Full Moon Pictures charm as I give it 3 ½ stars.

Ravenwolf Towers 2 (DVD) – The series continues as you learn more about the residents of the hotel and Mary and family on the top floor are building up to something big. Meanwhile Jake begins to speak with a new resident Ivan Ivanov, a supernatural investigator, who is there because of the strange family Jake, has had run-ins with. Pay attention Full Moon fans as some of the characters that live in the Ravenwolf Hotel are characters from past Full Moon movies which gives this series an interesting twist as I give this episode 3 stars.

After School Massacre (DVD) – Jess who is the popular girl in school and likes to have sleepovers has just had the weekend that sucked. A so-called friend or new girl she felt bad for just committed suicide at her sleepover and her teacher Mr. Anderson just said a photo of hers was ‘cute’ and a ‘friend request’ on social media. So Jess and her classmates fuck with Mr. Anderson and doesn’t care about the suicide decide they need to have another all-girls sleepover to get over things. Of course Mr. Anderson gets fired over the friend request on social media by the school and snaps killing two faculty members. Unbeknownst to Jess Perkins and friends Mr. Anderson is killing his way to the sleepover but that is okay because Mr. Anderson is weird anyway, “because he puts mayonnaise on his chicken nuggets.” Low budget, I laughed a couple times, not a ton of blood, I give the film 2 out of 4 stars.

The Creature Below (DVD) – A little known creature/Lovecraftian film from the UK about a woman named Olive who is on a deep-sea dive and has some trouble with a strange creature. The crew brings her up and all the equipment is busted including the suit which causes her to get kicked off the boat because she cannot remember what happened. Olive does grab a black egg from the suit and takes it home to study it? It hatches and spits black goo at her and now she is a part of this odd new species that is causing her to act differently to friends and boyfriend. As time goes on she believes she must protect this ‘god’ and feed it… humans. Hey Lovecraft fans if you haven’t found this one yet it is worth a watch as I give it 2 ½ stars.

4/20 Massacre (DVD/Vimeo) – A group of young women head to the woods to go camping and let their freak flag fly in celebration of 4-20 but also for a birthday weekend. While venturing into the woods the women are warned by a park ranger to not hang around and definitely not go looking for the weed farms that are nearby. Especially since the weed farmers have taken justice into their hands recently. A man out of his mind finds the women babbling about a thing chasing him but they don’t pay him any mind. They party, enjoy the woods, until a man/thing begins to slaughter them and smoke their weed believing they took its crop. A very entertaining slasher film that doesn’t over thinks the plot or force its way down your nerd gullet. It plays out like a good slasher film should. Is it perfect, no way, but it is well worth adding it to your horror film collection. Most horror films portray everyone that smokes weed as stupid and therefore the plot should be stupid this film does not do that. And I thank the filmmaker for that as I give this trippy horror film 3 out of 4 stars. For more details to check out on this new massacre: www.facebook.com/thehikeproductions .

The Theatre Bizarre (DVD) – An anthology filled with buckets of blood and gore that includes segments from Richard Stanley and Tom Savini. The stories of horror flow like a good beer down your throat until you hit the slow moving segment “The Accident” which is good but just doesn’t fit in this anthology. Thus, the entry causes the film to slow down and no longer flow right except the in-between parts with Udo Kier being his cool creepy-ass self! I give the anthology 2 ½ stars.

Annihilation (On Demand) – Natalie Portman gets pulled into something you cannot imagine when her missing husband shows up at her door from a secret mission he was on. After being pulled over by the military and husband almost dying she is meeting with a scientist played by Jennifer Jason Leigh who explains an event that happened three years ago. Well an unexplained event involving something falling from space into a lighthouse that they now call the ‘shimmer’. Something is a rainbow force field that is expanding. It first just covered the lighthouse but eventually took over the swamp, the state park, and a community. It’s feared it will continue to spread all over earth? The government has sent several people into the shimmer but none have returned except for Portman’s husband which there are no answers for? So Portman, Leigh, and three other scientists make their way into the shimmer to see if they can get to the lighthouse and get answers. Once inside they encounter some very strange shit that is mutating plant and animal alike. Visually the movie is beautiful and plotted out very well. Honestly if the “Lost” TV show had any sense and could have been this instead of the ‘dreaming we are all dead’ bullshit it was. Sorry spoiler alert if you ever wanted to watch that poor excuse for a show? But I get the feeling many are not going to understand a film like this and feel this film might be a couple years before it is actually understood? We will see but if you want to enjoy a bizarre sci-fi flick to fill that void inside your inner nerd this film will it and more as I give it 3 stars.

Oh it’s real and it’s happening… GROSSFEST! July 28, 2018! Go check out www.grossfest.com for all the details!