New York, NY, August 26, 2016 — Rubber Room Headhunters Corporation and Monsterpalooza President Eliot Brodsky are thrilled to announce the addition of Tony Timpone as Programming Director and Moderator for Monsterpalooza’s dual events in 2016 and 2017.

Timpone is no stranger to the world of horror with his three decades as Editor in Chief at Fangoria magazine, as well as a producer on Bravo’s 100 Scariest Movie Moments and author of Men, Makeup, and Monsters.

Timpone served as a programming producer and moderator at Fangoria’s Weekend of Horrors conventions from 1986 to 2009, events which featured an A to Z list of powerhouse guests including Jack Nicholson, Quentin Tarantino, Dario Argento, Christopher Lee, Vincent Price, Lucio Fulci, Rob Zombie, and many more.

“Tony is the perfect match for our events,” says Brodsky. “As a springboard, Tony will be handling many of our main panels this September at Son of Monsterpalooza in Burbank, as well as acting as our Programming Director and Moderator for all of our panels at 2017’s Monsterpalooza, which returns to Pasadena.”

Monsterpalooza: The Art of Monsters has been a staple of the West Coast convention scene since its inception in 2008. Curated exhibits and special presentations focusing on the artistic elements found in film and television has attracted the attention of industry professionals (Guillermo del Toro, J.J. Abrams, and a who’s who of the special makeup FX world) and fans alike.

“Monsterpalooza has taken what was started [by past conventions] and brought it up to a whole new level, with amazing guests, live makeup demonstrations, and an unbelievable monstrous monster museum filled with displays unlike any I have seen before. I can’t wait to begin work for Eliot and his team to create the next wave of must-attend fan events.”

Timpone will make his long-overdue homecoming to the convention stage for Son of Monsterpalooza, to be held September 16-18, 2016 at the Marriott Burbank Convention Center & Hotel (2500 North Hollywood Way; 818-843-6000). Son of Monsterpalooza will boast such highlights as special appearances from cast members of films such as Gremlins, The Hills Have Eyes (1977), Night of the Living Dead (1968), Re-Animator, and many more. Spotlight presentations with special guests from recent hits like What We Do in the Shadows and The Conjuring 2; informative talks from FX veterans Steve (Ghostbusters) Johnson and John (From Beyond) Naulin; a huge cash-prize costume contest sponsored by Premiere Products; a Saturday night After-Life Party; several premieres of independent horror movies; and much, much more.

“A consummate showman, Eliot has turned Monsterpalooza into the ultimate genre fan event, and he succeeds brilliantly at this task because he is a fan himself,” says Timpone. “He has created a wonderful biannual event to display his love of monsters, special FX and dark fantasy. Eliot brings fans from all over the world together under one roof.”

For tickets and more information on Monsterpaloooza, please visit www.monsterpalooza.com

Masters of mayhem collide in an ultra-cataclysmic Friday the 13th celebration during the Shock Pop Comic Con at the Ft. Lauderdale Convention Center, Feb. 13-15, 2015!

Other horror heros include The Mistress of the Dark herself, ELVIRA!, along with Ken Kirzinger (FREDDY VS. JASON), Rutanya Alda (AMITYVILLE HORROR 2), Zach Galligan (GREMLINS), Patty Mullen (FRANKENHOOKER), Naomi Grossman (“Pepper” from AMERICAN HORROR STORY: FREAKSHOW), Jovanka Vuckovic and Mark Miller (Clive Barker’s JACQUELINE ESS), an Art of Clive Barker exhibit, Chris Alexander from Fangoria brings his QUEEN OF BLOOD, and the Godfather of Gore Herschell Gordon Lewis also joins the show. The underground is alive and well also with appearances by Adam Ahlbrandt (CROSS BEARER), Brian Williams (TIME TO KILL), and James Bickert (DEAR GOD NO!), and The Ghouligans are on hand to share the merry fright.

And the very next evening, the bleeding heart pumps as the one and only John Waters, brings his newly revamped THIS FILTHIER WORLD show for one night only on Sat Feb 14, in a special Valentine’s Day performance, plus a signing of his new book CARSICK.

Shock Pop Comic Con runs Friday February 13 through Sunday February 15 at the Ft. Lauderdale Convention Center at 1950 Eisenhower Blvd. Tickets are available for $30 Friday and Saturday, $25 for Sunday, or a full weekend pass for $60. Visit http://www.shockpopcc.com for all our current updates and additional guests. 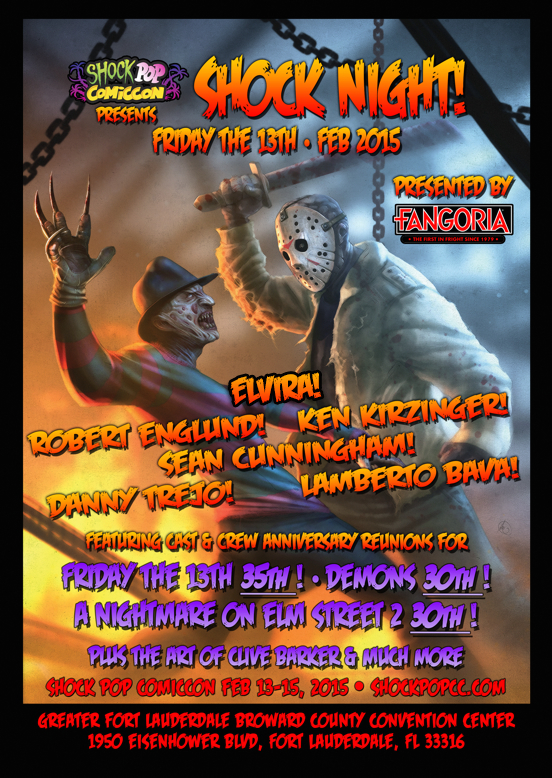 For our Black Friday Commentary for the all time classic THE EVIL DEAD.  With Kyle, Josh from down the road, and Tim.