This week Tim and Kyle are nursing headaches, but, never the less bring you a outstanding episode.  We are talking about Bronson taking revenge on a serial rapist in 10 Till Midnight, and Tim talks about the shot on video horror flick Death Row Diner.  Also we yammer on about Tim’s daughter’s 16th birthday.  Drunken Badminton.  The difference between bad independent movies and good independent movies. The first time Kyle ever saw Demons, and we a discussion of our top uses of gore in films.  so take a listen and Happy 4th of July.  Now go blow something up.

This week Kyle talks about joyous drunken Englishmen killing dragons in Dragonslayer. And Tim talks about the Canadian oddity in 1989’s Things.  Along the way we tackle those hard hitting topics such as The Detroit Pistons.  Baseball “ERROR CARDS”.  Freakshow, Saved by the Bell Documentaries.  The how and the why Freddy Kruger A.K.A. Robert Englund needs your $360 bucks for an autograph.  Convention fuckery.  And also movies.  So give us a listen. 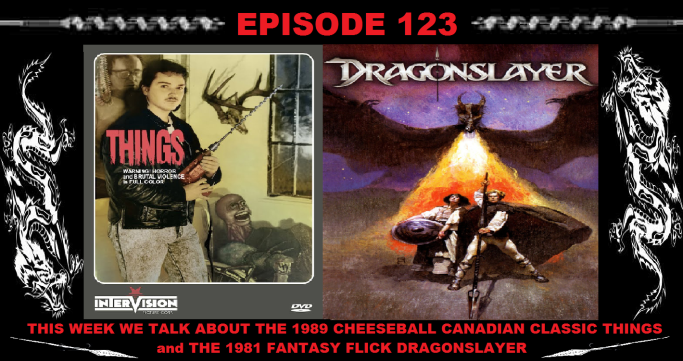 Syndrome (YouTube/DVD) – A short independent film written and directed by a cool young filmmaker Tim Novotny and it stars filmmaker Jim Roberts as the lead character (Nate). Nate is back from the war, depressed, crippled, you get the drift. Nate’s world is over but you as the viewer must decide is he dreaming? Already dead? Or is he a ghost now watching from afar? A cool short film that can make you think as I give it 2 ½ out of 4 stars.

Kids Get Dead 2: The Kids Get Deader (Vimeo/DVD) – You know me I will watch sequels… Especially when I haven’t seen the first film! But Darkstar Entertainment has just released Michael Hall’s independent slasher sequel. Casey survived the first film and suffers like most “survivor girl” syndrome. She wants answers why? Who was trying to kill her and friends? And so on… But makes this slasher different is Casey learns of author Charles Carver. An author whose books that he writes comes true just like what happen to her before so Casey goes looking for Mr. Carver for answers. Soon the masked killer is back on his killing spree again and Casey soon finds herself with more questions than answers and is unsure if Carver’s killer can be killed? I have to give it to filmmaker Michael Hall intentional or not the film has a little “In the Mouth of Madness”, a little “Wes Craven’s New Nightmare”, and a dash of a supernatural horror film that adds up to not being just your typical straight up slasher flick. I enjoyed the little twist, the gore looked cool, the usual slasher film amount of boobs make this an interesting watch for slasher fans as I give the flick 2 ½ out of 4 stars. You can find out more about it at www.darkstarentertainment.net .

Dragonslayer (DVD) – Its 1981 and it’s like a live action version of a Dungeons and Dragons story has come to life! And what makes this flick still cool to talk about is that after 30 years or so it still holds up as a great fantasy film. Virgins, dragons, sacrifices, I’m sold! Do yourself a favor and revisit this early 80s flick as I give it 3 ½ stars.

House of Oddities: The Story of the Atrocity Exhibition (Vimeo/DVD) – An amazing documentary that takes you on the journey of how a local Atrocity Exhibition got started and how some very different and passionate people make it happen. Independent filmmaker Brian Cottington lends his talents in filming this small group of artists that want to entertain people whether through art, theater, dance, etc. And give the mainstream something that isn’t looked at as your typical sideshow or freakshow but true art or freedom of expression. Cottington gives you an inside look of how a small group of artists came together from many walks of life and put together a show that not only has a loyal following but grows by the minute. A show that is very different from anything you have seen before and to keep people in attendance guessing they change the show every year. I believe this is a perfect documentary filmed by Brian Cottington for the mere fact this isn’t something I am into but after watching this has my full respect for what they do. Oddities they are not, artists they are and I am grateful for that and the people who were apart of this documentary. I give this wonderful film 4 out of 4 stars and can be seeked out at www.houseofodditiesmovie.com .

Dry Bones (DVD) – Anytime a cool independent filmmaker such as Gregory Lamberson contacts you about a new flick you take notice… Especially when he was the dude that gave us the beautiful slime/gorefest “Slime City Massacre”! So when I got this screener I could not wait to sit down and watch a film that stars Debbie Rochon and Kevin Van Hat Trick aka Duane Smith aka just go watch “Basket Case” if you are not a nerd like I am. But anyway Lamberson’s latest is about a boy named Andrew who has a monster living under his bed and so frighten he is unsure that he can ever sleep again. Or it can be he is holding a piece of history in his hands (Fangoria #1, Godzilla cover) and knows how much it is worth? But anyway his dad (Bart) comes barging in because he cannot hear “Charlie’s Angels” and wants to put a beating upon Andrew but soon finds himself face to face with the hideous monster living under Andrew’s bed. Many years go by and Andrew now Drew has returned to town for the first time in years because his sister wants to sell their parents’ house. With nowhere to stay and needing to make repairs to the house before its sold Drew decides to move back to his original home thinking the monster is in his past. Drew was wrong! Soon Drew has strange dreams, all who enter are dying in a horrible manner, and the neighbors believe the home is haunted. A great independent horror film with cool practical monster effects and one of the best actresses ever as a Succubus… I want a sequel and I want Debbie Rochon in even more monster make-up because she makes it look so fun and awesome! All I got to say horror fans thank god for filmmakers like Gregory Lamberson as I give his new flick 3 ½ out of 4 stars.

After Dusk They Come (DVD) – Some rich people get shipwrecked on an island that just happens to have the offspring of Sasquatch and the cave creatures from “The Descent”. It’s worth wasting 80 or so minutes on as I give it 2 stars.

Things (DVD) – Possibly the most bizarre film I ever had the pleasure of watching. And that is saying a lot my friends. “Donnie Darko”… poop on you! “Fight Club”… go fuck yourself! “Eraserhead”… I’m still not sure? Just when I thought I seen all the warped mindfuck movies out there I come across Andrew Jordan’s ultra-fucking-weird no budget independent horror film that was shot on Super-8 in Canada and dubbed. Got your attention so far? Two friends go to a cabin in the middle of nowhere that just happens to be one of the fellows’ brother’s cabin. And his brother just had a weird dream about a naked woman in a basement with their monster baby and wakes up to his wife getting very sick. While the two dudes steal beer from the fridge Doug’s wife dies from a creature bursting out of her stomach that was an experiment from Dr. Lucas and now is multiplying throughout the house. Between the rambling nonsense called dialogue is a battle between these odd creatures and man in the ultimate bloodbath called, ‘survival’. And that is from what I can understand from watching this flick. I give this most bizarre flick 3 out of 4 stars for the mere fact I have never been so happy to own a movie!

Perished (YouTube) – A short film from SAR Films in the UK that is about a man who must decide suicide or figure out a way to outwit zombies that have him trapped inside a house. I give the flick 3 stars and really enjoyed the ending.

Halloween 2: H2 (DVD/remake) – Believe me if you ever talked to me about the first flick or read my review you understand why it took me so long to get over my anger to give this film a chance. And by the way I am still a little angry but I felt it enough time had pass to see what Rob Zombie did with the sequel and maybe figure out he doesn’t want a third film? The film begins in the hospital just like the original with Laurie and Annie in really bad shape. Laurie so worried about Annie goes to visit but of course Michael Myers is back to finish what he had started. Laurie wakes up in bed almost a year later living with Annie and Sheriff Brackett scarred, terrified, and dysfunctional. Meanwhile, Michael Myers has disappeared from the wrecked morgue van and hasn’t been seen. But Michael is seeing his dead mother and is told it is time to return to Haddonfield while Dr. Loomis is more of an asshole than the first film as he has written his next book all about the events of last Halloween. I enjoyed that Rob Zombie kept the characters evolving from the first film whether people liked it or not and paid homage to the original second film with the hospital scene. This movie has a grimier and gritty feel to it that the first film didn’t have and the gore keeps flowing. But also at the same time giving the drive to why Michael does what he does and why Laurie/Boo is so fucking screwed up. Am I happy there was a sequel let alone a remake, “HELL NO!” Did I get off my high horse and give this film a chance and glad I did, “YES I AM!” This sequel isn’t a horrible film and worth a watch if you are a hardcore fan of the original like me? It may have took two films for Rob Zombie to give us his full vision of Michael Myers good or bad but after watching this film and “Lords of Salem” I am grateful for Rob Zombie haunting Hollywood whether I agree or disagree with his movie choices and with that I give this film 2 stars.

Tony: London Serial Killer (DVD) – I haven’t seen a movie so boring since I pushed myself through the horrible feature “The Zombie Chronicles… in 3-D”. Next time I see this title come up I will just punch myself in the face and feel better that I did. I give it nothing as you should avoid it like the plague.

Also you now can purchase the co-directed film project from Daniel Boyd and I called, “Jagoff Massacre” at www.jagoffmassacre.com . There is a sequel in the works…

Plus you can always go to the greatest T-shirt place online or if you are in Texas visit the store of “Fast Custom Shirts” where T-shirt Joe is the only place that you can purchase a Gross Movie Reviews and Jagoff Massacre t-shirt but also Cannibal Campout, Woodchipper Massacre, and a Spookies T-shirts also!!!! Go to www.fastcustomshirts.com for details.