Mind Trap (YouTube) – Another Dan Haggerty classic was unearthed from 1989 but oh I was wrong as Mr. Haggerty was much underused in this feature and has the look of being on set for one day. What else doesn’t help is when you go search everybody involved with the film on the Google machine this was pretty much it. Anyway in this weirdo film where a cat is used as a weapon Dan Haggerty plays an agent for this girl Shana. She just happens to be casted in several B-films that she quite enjoys but might have her big break coming. That is all put on hold when her father is killed by the KGB for his mind control research. Shana’s father built a dream room under their house but has only seen it once but the KGB kills the rest of her family trying to get it. Shana plays a weird game of cat and mouse if that is what you wanna call it with the KGB as she uses her movie skills to take them on. This movie is actually very terrible and found myself laughing several times because how bad it gets. Also the film disappointed me greatly as there are very few scenes of Dan Haggerty… I may have to go rewatch “Night Wars” or “The Channeler” as I give this a ½ star.

100 Bloody Acres (Shudder) – An Australian film about The Morgan Brothers who make organic manure. These two brothers recently hit it big with a big name client as they have a special formula of manure that involves dead bodies. If roadkill isn’t available any dead human will do. Brother Reg who just picked up a dead body from the side of the road picks up three music festival goers believing he can just drop them off and get with the hot redhead Sophie. Sophie is everything to Reg as she sings the golden oldies and still has some country girl in her. But things go south quickly as both of her boyfriends find the dead body in back, but too late Reg has gotten them to his older brother. Now the only thing in the way is Reg protecting Sophie from being grinded up in the manure by his big brother. One mishap after another result in 80-year old pussy eating, a cop who is best friends with the brothers being shot, and Sophie admitting she actually likes Reg and not the two guys she is with. It’s weird enough and gory enough the film is a very pleasant surprise of a horror film as I give it 3 stars.

Deadly Games (YouTube) – Apparently this 80s or 70s slasher but actually thriller has reappeared again for people to watch for free and how it gets you to watch is it stars a young Steve Railsback and the legendary Dick Butkus. Anyhow Billy Owens who just reopened the local town movie theater and a cop Roger Lane got this weird war buddy relationship going on. If that isn’t enough everybody in this west coast town is married and banging everyone else except their spouses to the point I thought I was watching the wrong movie when the pool scene came on. Because everyone is bumping uglies a masked killer who also happens to be a peeping Tom begins killing off people. There really isn’t an ending and this weird movie formula works on some level so if you got some time to kill give this a try as I give it 2 stars.

Shazam! (Theater) – Captain Marvel, ha-ha caught you sleep reading… Anyway DC lets this family film out about a 14 year old kid named Billy Batson who becomes a superhero that is strong as Superman because his heart is pure. He is picked by a wizard to carry on the Shazam tradition and defeat the evil power of the Seven Deadly Sins. Billy being a runaway who doesn’t have a family learns what the most important thing is having a family and that helps him defeat the evil Seven Deadly Sins. But what does this have over Batman and recent Superman flicks: it’s funny, interesting, a great origin story and it isn’t Batman or Superman. The sooner DC universe learns you can dig deep into your comic archives without having the big two involved the sooner we can see more cool flicks like “Shazam!”, “Wonder Woman”, hell even “Aquaman”! This is the most family oriented comic book hero film I have seen to date and its great as I give 3 ½ stars.

Monster Island (SyFy Channel/DVD) – Just when I thought SyFy Channel turned into the Harry Potter network they pull this Asylum Entertainment project out of their ass that stars Eric Roberts as a Navy general. A giant volcanic monster named ‘Tango’ or giant star fish has risen from the deep depths of the ocean to cause destruction on Earth. But there is a legend of a monster called ‘The Living Mountain’ when brought to life it will kill the giant magma filled starfish. Yes it is their version of the new Godzilla movie but if you enjoy silly shit involving monsters then grab a beer and enjoy Eric Roberts talking to himself as I give it 2 stars.

Await Further Instructions (DVD) – This is a post-apocalyptic oddity as it takes place at the holidays. The news keeps reporting strange going-ons with the U.S., China, and Russia like WWIII is about to happen, then blackness. The plot is the son comes home with his Indian girlfriend to meet mum but the family is super racist. Once they figure it is a bad idea it is too late as they wake up early to leave but the house is covered in a black metallic substance and a message on the tele reading “Await Further Instructions”. The family quickly turns on each other as they believe the girlfriend is infected and the father only believes what the tele tells him. What is outside and how to get out is unknown? A super weird flick that has that uneasy “Videodrome” and “The Mist” feeling to it with an ending that will just leave you asking a shitload of questions. I give it 3 stars as your homework assignment is to go watch it report back to me! 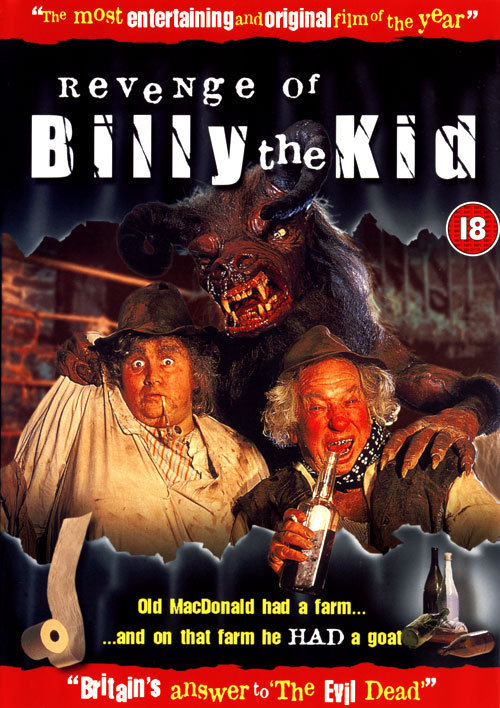 Revenge of Billy the Kid (DVD) – If you are looking to fulfill your British film weirdness well this film about the McDonalds on an isolated island will do. These back woods farmers called the McDonalds sell their crops to mainlanders but try to keep to themselves on this island. Well the father McDonald gets all horned up one day walking with his prize goat and yes he makes it his mate! Little time passes as the goat of course gives birth to a mutant. The one young woman Ronnie that lives on the farm gives it the name Billy and tries to take care of it until it runs away. When it is all grown up Billy’s ugly ass comes back for a killing spree of the family! If you need more bestiality in your life this 2 star film is all you.

The Perfection (DVD) – A thriller with a couple bizarre well written twists takes place in the music world. A cello artist named Charlotte who was as perfect as god according to her teacher had to leave the famous music training school to take care of her sick mom. A decade passes and a new prodigy has risen named Lizzie. Charlotte tracks her down along with her old teacher to get back in the music world. Lizzie and Char hit it off immediately and head off for a little vacation but Lizzie is not feeling well at all. Lizzie is later found all drugged up on the side of the road by herself and missing something. Without saying too much the film takes a couple turns in the story that you will not expect and quite enjoy the finish. Don’t mind you see some blurred out man meat from Steven Weber it’s all part of the process as I give it 3 stars. 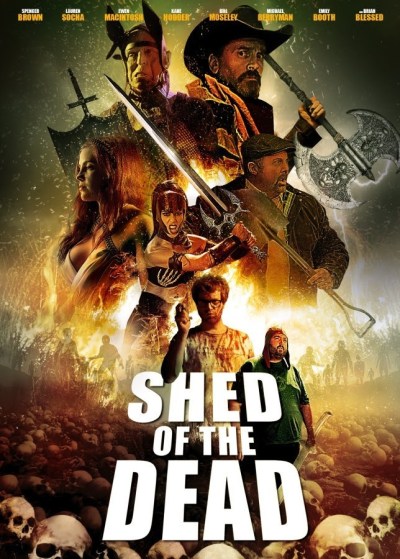 Shed of the Dead (DVD) – Trevor is a man living out his fantasy world in his shed when he isn’t hanging with his buddy Graham playing some Dungeons and Dragons type game. Trevor and the wife don’t get along and he is in between jobs and now the neighbor Kane Hodder wants him evicted for not taking care of his lot. Trevor as Casimir the Destroyer always knows what to do but in the real world Trevor hates life until… the zombie apocalypse hits and Trevor tries to decide should he save his wife and just hang out with his friend Graham who finally was able to leave his house. There is also a couple other fun names in here: Brian Blessed who does voiceover, Michael Berryman which may own the most famous recent death in a movie to become a zombie? (He is dressed as a leather horse with a butt plug, you need to see it just because!), and Bill Mosley as Doc who is excited the zombie apocalypse has happened. It is a clone of “Shaun of the Dead” a bit but don’t let that dissuade you from enjoying this entertaining zombie film that needed more Kane Hodder as the Canadian. For that I give it 3 stars.

This week we talk about a flick that was made by some of the people behind the immortal SPOOKIES in INVASION OF THE MINDBENDERS.  Also, we take a look at the workplace violence flick MAYHEM.  Also,  Kyle celebrates his beloved Cleveland Browns not winning a single game this season,  Why we think the NFL is fixed,  the origin of our president Donald Trump.  CHUD breeding, and a ton of other horseshit.

This week we celebrate one of the hardest working dudes in all of movieland with our first annual JACKIE CHANS-MAS as we cover his new flick THE FOREIGNER.  And also we talk about the Dick Butkis
epic HAMBURGER: THE MOTION PICTURE.  Join us as we talk about such topics as fighting Pittsburgh CHUDS in the extreme cold, what we used to do on school cancellation snow days,  pooping in WWII, and we reminisce about Aqua Teen Hunger Force.