This time around we bring you 3 fairly newish flicks.  First is the latest in one of the most maligned franchises in horror and that is 2022’s THE TEXAS CHAINSAW MASSACRE.  Next John talks about a glacier that’s made of blood in BLOOD GLACIER (what else would it be called) Then Tim chats about the great Richard Brake as a demon that wants the souls of the elderly in BINGO HELL.  And of course we talk about yet another Amityville movie.  This time it’s THE AMITYVILLE CURSE, or Amityville 5 or…  whatever, we don’t care anymore.  Also we read your listener questions.  go over the newest news, and talk about a ton of other semi interesting topics like An Aliens television show, who the best basketball player of all time was, and the insane things old folks get up to when they are in a bingo hall.  So download this episode or Larry Bird is gonna come after you like your name was Bill Laimbeer. 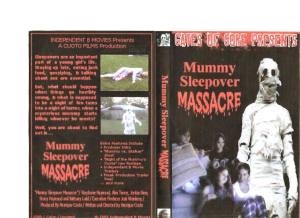 Mummy Sleepover Massacre (DVD) – Where has this horrible greatness been hiding at? Well first off it was written, edited, and directed by the one and only Henrique Couto… when he was like 15! Within minutes of me posting of this film being in my possession, Henrique wanted to know how I got it. Second off, with a title like this you knew this movie would find its way to me just because. It has been long out of print but that didn’t stop me from enjoying the horrible glory of a toilet paper covered mummy murdering teenagers at a slumber party. There isn’t a whole lot to say about it besides that. Is it bad… yes? Did I enjoy this gem from an unknown filmmaker (2003) at the time who is a big deal now… Hell yeah!!! Henrique understand this film has found its rightful place in my movie collection where it belongs as I give it 1 ½ out of 4 stars. But it is one the best god damn 1 ½ star movies ever just for the title and the toilet paper mummy! And Henrique, thank you.

The Conjuring 2 (Theater) – After the events of the first film the Warrens find themselves investigating the famous home in Amityville in 1976. During a séance Lorraine finds herself defending herself against an evil she has never experienced before but not a part of the famous Amityville house. Once home she makes Ed promise her they take a break because she has seen his death. But this evil spirit takes residence in a single mom of four’s house in London 1977. The Warrens are called in by the church just to observe for three days. When they arrive one child is completely terrorized and the other three kids and mom scared for their lives with no one to turn too. After video proof that it was faked or supposedly fake, the Warrens rush back to the home to help the family from this beyond evil spirit that refuses to go away. Amazing flick again horror fans. I am not much into paranormal movies but the two ‘Conjuring’ flicks I have absolutely loved and glad they exist. I give the sequel 4 stars and forgive them for even thinking ‘Annabelle’ was a good idea. Wait a minute… there may be a sequel to ‘Annabelle’? Don’t fuck with the formula based on true stories Hollywood! Just sayin…

Swamp Thing the Series: Volume Two (DVD) – This box set covers half of the third season as the third season had something like 50 episodes. Crazy, but what is really weird I must start my quest looking for this other box set as it seems to unavailable everywhere? But anyway after ignoring for a full season that Arcane sent a kid to South America news comes that Jim is alive sending his mom on many trips to South America looking for him. Sadly no help from Swamp Thing but that doesn’t stop Alec Holland from getting a new love interest that during an episode Mr. Swamp Thing eats rare lizard eggs that gets him high and dream about his new girl. They do kill off Kari Wuhrer’s character quickly and have a few episodes where Swamp Thing and Arcane must help out each other. Overall its cheesy television but worth checking out if it pops up on Netflix, On Demand, Hulu, etc., as I give it 2 ½ stars.

Survivors (DVD/Vimeo) – Those filmmakers in the UK refuse to let the zombie genre go away as this latest entry into the genre takes a dramatic and political take on it. Medea is a medical testing joint that is funded by the government and recently some human patients have gone missing. With little to go on Kate and her cameraman Duke try to get the inside scoop on what is going on and see if the rumors are true about a new secret weapon, “Zombies”. While investigating the experiments have worked and the patients have escaped causing a shitload of chaos in the world. From here the film focuses on Kate before and after the chaos flipping back and forth. After Duke takes off looking for help Kate continues on trying to survive only to meet Paul, who just so happens to be sent by the government to find out what actually does Kate know? The film is a dramatic, classic, smart take on an overloaded zombie genre which for me never gets old as I give the film 2 ½ out of 4 stars. The film has the suspense of another recent zombie movie I liked called, ‘State of Emergency’. For more on this film check out: www.continuummotionpictures.com and www.mctvnetwork.com .

Just Desserts: The Making of Creepshow (Blu-ray) – A Michael Felsher project that took a life of its own as it went from a special feature to a full-length documentary that can only be explained as an orgasmic explosion of amazingness about the legendary film ‘Creepshow’. The documentary covers everything of how it began to Tom Savini thinking it was Halloween for five months straight while being on set to make all sorts of creatures for the anthology. The film is almost timeless and has one of my favorite stories of horror in the segment called ‘The Crate’. The documentary has some great interviews with George Romero, Savini, Ed Harris and so on but also great stories about Stephen King and him being a kid at heart. The Blu-ray also has ‘Scream Greats’ Tom Savini video which was watched by many horror fans who grew up in the 80s but now has a commentary as well with Savini looking back at the video. This Blu-ray is a true nerd out of a disc as it has everything you could ever imagine about ‘Creepshow’ and for that I say thank you to Mr. Felsher as I give the Blu-ray 4 out of 4 stars but also it will be one of the best horror discs of 2016! Place your order now at www.synapse-films.com .

Blood Glacier (DVD) – A German horror film about a Climate Research Center high in the mountains and its occupants finding a strange blood red covered mountain one day and gone the next. But after a dog is bitten or prodded strange noises are heard and they get back to home base to examine the samples. The samples are no good or so they thought so they rush back up there the next day and it’s gone. Strange things are happening to the world since the glaciers are melting and this can be one of them where animals and bugs mutate then attack humans. It boils down to the German version of ‘The Thing’. It’s hard not to make the comparison but don’t let that stop you from enjoying this lesser known creature feature as I give it 3 stars.

Batman: The Dark Knight Returns Part 1 & 2 (DVD) – The 2012 animated feature stars the voice of Peter Weller as Batman where Batman is now 70 and been out of the spotlight for ten years. But since his disappearance Gotham has gotten worse from a whole new slew of criminals called “The Mutants”. Bruce Wayne tired of retirement and Commissioner Gordon about to retire decides it is time for Batman to return and restore order in Gotham. But this isn’t your Saturday morning Batman cartoon folks as not only does Batman kill some people or criminals, but “The Joker” does also during his return to society. Pretty violent and the story of how Batman fakes his death so he can continue teaching young people to take care of Gotham from the shadows. I give the flick 3 stars.