This week Jon Cross returns as we all give him a collective croup hug and mourn his beard loss. Tim covers an awesome Full Moon space western with the always great Andrew Divoff in Oblivion and Oblivion 2.  We hate vegans and their sort in Blood Diner brought to you by Jon Cross.  And a grumpy TLJ goes after an Indian witch in Ron Howard’s western / horror mash-up The Missing.  Along the way we talk about Danny Trejo vs. The Kool-Aid Man, Kyle see the movie of the year so far, Tim goes off the rails in a Trancers based rant, The crap that eventually be Ghostbusters 3.  And in this week dead or alive…. Paul Hogan??? 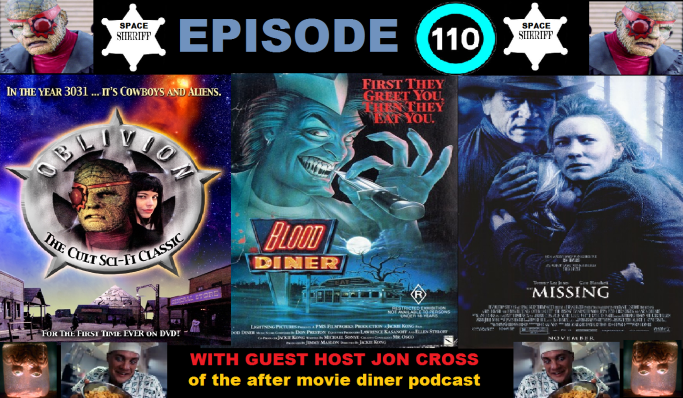 Oblivion (DVD) – A great sci-fi/western/comedy off the beaten path type of film from Charles Band and Full Moon back in the mid-90s. It’s the year 3031 and the old west is back again with even a cyborg deputy played by the cool ass Meg Foster! A bad dude named Red Eye played by Andrew Divoff rolls into town of Oblivion for the mere reason to shoot down the town sheriff. Once done, Red Eye and his S&M sidekick Lash plan on taking over the town. The son of the sheriff learns of the news from the undertaker and returns to a town looking for a new sheriff and he believes he isn’t it as his father and he didn’t see eye to eye. Whether Zack wants to or not he must face off with Red Eye in a showdown as lives depend on it. The film has some great moments that include the night scorps and an arm wrestling event that involves a little green puppet monster. This is a film that has been forgotten by most but worth revisiting as Charles Band proved he can do other projects outside of the usual suspects: Puppet Master, Trancers, and Subspecies. The film also stars the likes of Issac Hayes, Julie Newmar, George Takei, Carel Struycken, and Irwin Keyes. I give the flick 3 stars.

Oblivion 2: Backlash (DVD) – The film continues the storyline of Lash still doing criminal activity but with Red Eye dead she is forced to do everything herself and the new sheriff Zack plans on keeping the town of Oblivion safe. But soon that changes when a bounty hunter played by Maxwell Caulfield flies his ship into town to arrest Lash for something she never did years ago. Zack finds himself between a rock and a hard place when he has to defend Lash but also finds out Red Eye has a brother Jaggar has just landed and wants to find Lash also. The sequel struggles to have the same fun western/sci-fi feel of the first flick and seems at times Charles Band maybe shouldn’t have stretch the storyline to a second film… But if you watched the first film you need to see the second film to see how it ends as I give the film 2 stars.

Gingerdead Man vs. Evil Bong (DVD) – The mish-mash flick may never have lived up to the hyped but Charles Band goes all out to market the film any way possible as I got mine in a box of cereal called “WEEDIES”! At least Full Moon veteran actress Robin Sydney (Sarah) returns; as the pretty girl who owns the bakery that brought to life the foul-mouthed cookie monster we all know and love. But Charles Band doesn’t stop there as he brings back Larnell from the “Evil Bong” series and he relives his story through flashbacks now that he owns his own Head Shop and would like to meet Sarah in order to help each other out business wise. Meanwhile the evil cookie is back and wants his revenge on Sarah but he has to go find them in the world of EEBEE the Evil Bong. Soon it builds for a face-off that just putters out than be a fun colossal fight. This film disappointed me, but shouldn’t have as Charles Band has tried mish-mash fights like this in the past and it doesn’t translate well in Full Moon movie world as I give the film 1 ½ stars.

The Missing (DVD) – Tommy Lee Jones stars in this supernatural western film that has him as a father to Kate Blatchett that left her years ago to pursue a dream he had that told him that he needed to leave his family. But now he is back trying to reconnect only to have it go wrong when an Indian attacks his family and kidnaps his granddaughter. But this Indian is considered a witch as he hangs snakes from trees and only believes in selling women of any color in Mexico. To be honest I totally forgot this flick but glad I got a chance to watch this film as I can see why some people even classify it as a horror film. I give it 3 stars.

Survival Quest (VHS) – A great forgotten Don Coscarelli film that doesn’t get its due it deserves as Lance Henriksen plays a character named Hank Chambers who is a mountain man that helps normal people come to his camp and learn to work together, survive in the wild, and respect the world. When Hank confronts a crazed weekend warrior and he is wounded his group runs for their lives and tries to survive the crazed weekend warrior’s attacks throughout the woods and the only ones they can depend on is themselves as Hank has taught them. A great 80s adventure film that seems timeless and deserves a better fate than YouTube/VHS hell. I give the flick 4 stars and as usual prove Lance Henriksen makes everything better including having Reggie Bannister as your airplane pilot.

The Last Warrior (DVD) – A 9.7 magnitude earthquake separates California from the rest of the United States and Dolph Lundgren has taken it upon himself to try and restore order at his lonely armed forces compound to all who come. The film sounds better than it is just for the mere fact the film lacks budget and could have possibly been bad ass if there was a better budget for Dolph and company. I give the film 2 stars.

My Sucky Teen Romance (DVD) – Emily Hagins, the young filmmaker that gave us the interesting zombie flick “Pathogen” several years ago this time around tackles teens facing college, their last trip to SpaceCon, and are vampires actually real. The movie pokes fun at the recent “Twilight” films every chance it gets but also pokes fun at today’s awkward teens just trying to live their lives the way they want. Don’t let the title mislead you away from this very funny and a must watch comedy. I give it 3 stars.

The Fine Art (VHS) – Its Eric Stanze’s shot on video student film from 1992 and released in 1994 that revolves around an artist named Valerie that is very talented but not at love as she is very unsure of herself. Valerie goes out on a blind date at her friend’s persistence with a friend of hers and soon allows him into her world. But when Valerie peaks into his world she is disturbed and scared what could happen next, especially when her best friend brings up the Cedar Hill Slayer murders that happened last year. The film is very rough around the edges but if given a chance you can see why Eric Stanze is considered a talented filmmaker. I give it 2 stars.

Bounty Hunters 2: Hardball (VHS) – Michael Dudikoff and Lisa Howard are back in the sequel playing bounty hunters who get tangled up with the mob only to realize they really need to work together before both are killed. Yeah, the movie is a big bag of boring poo but with Dudikoff starring and a number 2 after the title there was no way I could pass it up. I give the flick 1 star.

Also you now can purchase the co-directed film project from Daniel Boyd and I called, “Jagoff Massacre” at www.jagoffmassacre.com . There is a sequel in the works…

Plus you can always go to the greatest T-shirt place online or if you are in Texas visit the store of “Fast Custom Shirts” where T-shirt Joe is the only place that you can purchase a Gross Movie Reviews t-shirt but also Cannibal Campout, Woodchipper Massacre, and a Spookies T-shirts also!!!! Go towww.fastcustomshirts.com for details.