Bloodfist V: Human Target (DVD) – This time around Don “the Dragon” Wilson stars as Jimmy Stanton who wakes up in the hospital with amnesia. The super-hot Denice Duff is paid $500 to go into his room and claim to be his wife to take him home after he wakes. Quickly she gets involved in something much bigger as some mob guys come by at every opportunity to kill Jimmy. As Jimmy tries to figure out who he truly is the NSA comes a knocking to explain he was undercover as part of a Chinese smuggling organization. Not knowing who to believe as usual he goes out on his own with Ms. Duff to clear his name and kill every bad guy in his way! A fun and hilarious direct-to-video bootleg of Steven Segal’s ‘Hard to Kill’ with no real serious villain as I give it 2 ½ stars.

Bloodfist VI: Ground Zero (DVD) – In this entry Don “the Dragon” Wilson is an Air Force officer who is delivering classified material to a missile complex. Instead of a simple delivery he stumbles into a siege in progress on the missile site to set off a nuclear war. Eventually Mr. Wilson makes his way into the highly secured underground facility to save the day as I give it 1 ½ stars.

Bloodfist VII: Manhunt (DVD) – Don “the Dragon” Wilson is Jim in this entry into the series where it teaches you not to pick up strange hot blondes in a bar. After a night with the hot blonde Jim is accused of being a cop murderer and Steven Williams is on the job to track Jim down to bring him to justice. Jim must not only clear his name but bring down the drug ring within the LAPD as I give it 2 stars.

Bloodfist VIII: Hard Way Out (DVD) – The last entry for Mr. Wilson has him as a high school teacher with a past in the CIA that catches up to him. Assassins are out to kill him as part of a cleanup operation as his former boss is expected to be declared the new head of the CIA. He heads over seas to keep his teenage son safe but that only slows the CIA down for a day before they catch back up as I give this last entry for “The Dragon” 2 stars.

Bloodfist 2050 (DVD) – This 2005 entry into the series made eight years after the original series is a Filipino post-apocalyptic film set in L.A. 2050 that begins with some stock footage of 80s Filipino post-apocalyptic films. Then we are introduced to a young man named Alex that when he isn’t banging the local stripper he gets wrapped up in a famous fighting ring. This is supposedly going to help him find his brother’s killer and make some money along the way. The film is kinda of dull and been done before aka the first ‘Bloodfist’ movie, this entry just has a lot more boobage in it as filler scenes with a few strippers dancing as I give it 1 star.

The New Mutants (On Demand) – This was that forgotten or shelved supposedly horror film starring mutants that we all wondered about but weren’t really excited about. If bored, the film isn’t that bad as teenage mutants are sent to an asylum that is funded by the Essex Corporation for scientific research. The teens are told it is for their own good but as a new mutant is introduced into the group they are being haunted by their own fears and must ban together to defeat their fears. This film just comes off as a misfire more than a bad movie and most likely besides being caught up in the whole Fox/Disney takeover was just a rushed project as it seems like the ‘X-men’ phase of superhero films were ending??? Anyway it is still worth a watch if you can’t find much else as I give it 2 stars.

Jiu Jitsu (On Demand) – If your brain needs something like a ‘Hardcore Henry’ to fulfill that feeling this might be the project for it? A weird comic bookish story about an interdimension being that comes to Earth every six years at this ancient temple to fight the best warriors alive. If the warriors disagree or do not fight the being it will just destroy the Earth. Seems simple enough as when all the crazy MTV action fight scenes are not happening with Tony Jaa and others we get just enough crazy Nic Cage to keep you interested till the end. The action film is entertaining and filled with some good fight scenes but the ‘hero’ character of the plot isn’t someone I feel fans will care about and hurts the film overall. I still give it 2 ½ stars for all its action but I would say check out ‘Triple Threat’ before you get ass deep into this movie.

Terminator: Dark Fate (DVD) – You can make fun of me for watching the whole ‘Bloodfist’ series for no reason. But for those who are fans of this series of films you know this series was done after the third entry, correct? ‘Terminator 3: Rise of the Machines’ the most pointless film ever made! This sequel/reboot tries its best to be pointless but really seems to recycle the storyline we just digested in ‘Terminator: Genisys’… I personally just watch the films because of Arnold but if you are just looking for something dumb to watch here you go! Spoiler alert: Skynet does not exist any longer and it is now called Legion. Not saying but just saying this should have been done when they decided to make the third film. Hey Hollywood if you are going to do this again just give us the humans vs. terminators post-apocalyptic war film in 90 minute form otherwise it is just dumb as I give it 1 ½ stars. 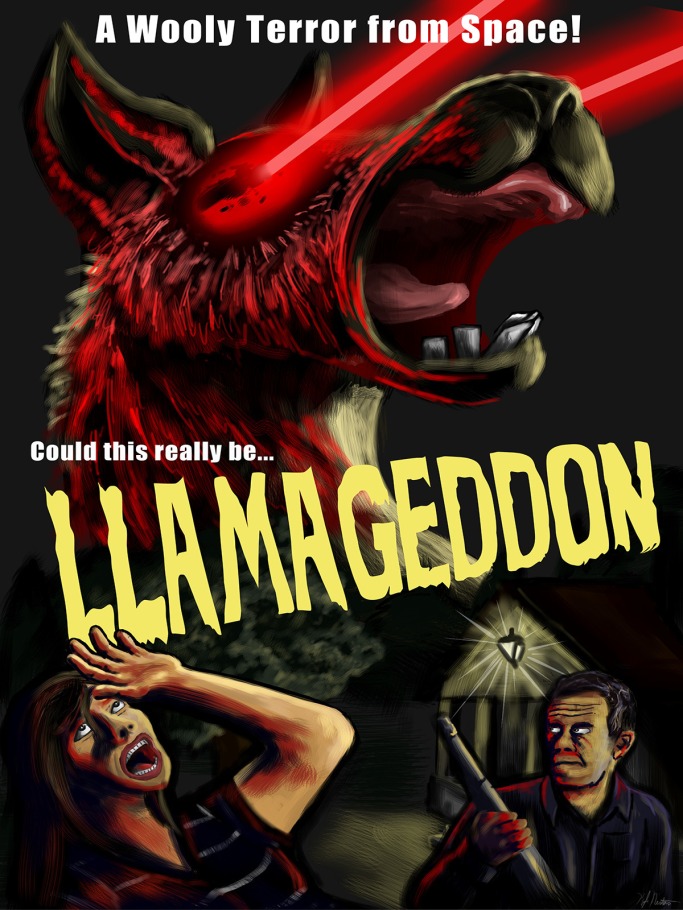 Llamageddon (DVD) – This wonderful creation is about an alien llama that crash lands on Earth in a small community and begin its takeover! When the llama isn’t stomping a victim with its hooves it is killing people with its laser eyes. Yes, you heard me correctly people when its shoots lasers from its red eyes fireworks go off. The alien llama stumbles upon a house party of young people where it begins killing them one by one but also spits on one party goer to have him begin a transformation. This independent film has it all folks and I absolutely laughed my ass off as the alien llama tries to destroy us all! If that isn’t enough pay attention to their drinking game as the character Dan changes shirts in every scene (17 times if I counted correctly?) I cannot thank filmmaker Howie Dewin enough for giving us this amazing gem of cinema as I give it 4 stars all the way!

Fatman (On Demand) – So what do you do with a super racist actor that may have ruined his career forever? How about have him play the role of Chris Cringle aka Santa Claus. This isn’t your typical holiday film as a young man is given a lump of coal for Christmas and this upsets him to the point of hiring a hitman to kill Santa Claus. If Santa doesn’t have enough to worry about he has to take on a government contract in order to make ends meet so he can continue giving good boys and girls presents once a year. This holiday film goes far off the reservation in this dark comedy to bring a holiday story that is just perfect for us weirdos. Santa isn’t your typical jolly red coat figure we all remember he is portrayed as a normal old guy just trying to get by with what he has. Difference is this Santa has been doing it for hundreds of years and I refuse to describe more of the movie because I like how the story tells you just enough to explain everything quickly to keep the flow going. This holiday gem gets 3 ½ stars and will most likely become a yearly watch for me. 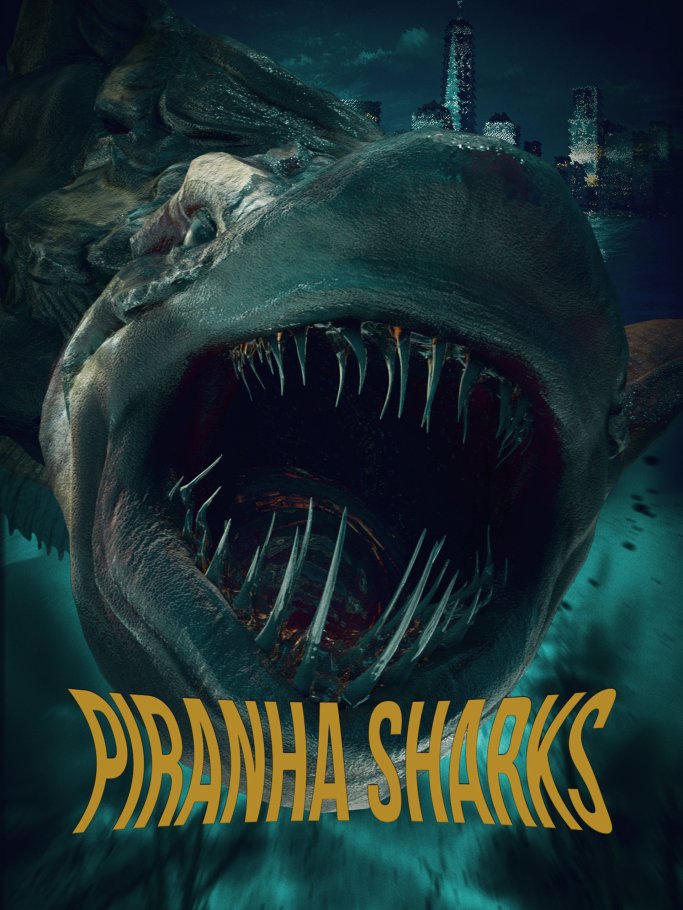 Piranha Sharks (DVD) – Think sea monkeys kids! A science project gone wrong and now the military no longer interested in the project presents a problem: what to do with the piranha sharks? How about sell them as the hottest new product to get through an infomercial? And that is what two weird idea guys come up with as they sell them by the millions becoming rich overnight. But of course things quickly go wrong as the piranha sharks are reproducing out of control and starting to attack people anytime the water is turned on. Not even Jose Canseco pleas for his favorite thing can stop a couple exterminators from coming up with an idea to save New York City! Even a mayor played by Kevin Sorbo (who is Winnie the Poohing it around the office)  hopes the exterminators come up with an idea to save them all before all out nuclear assault as I give the entertaining film 3 stars.