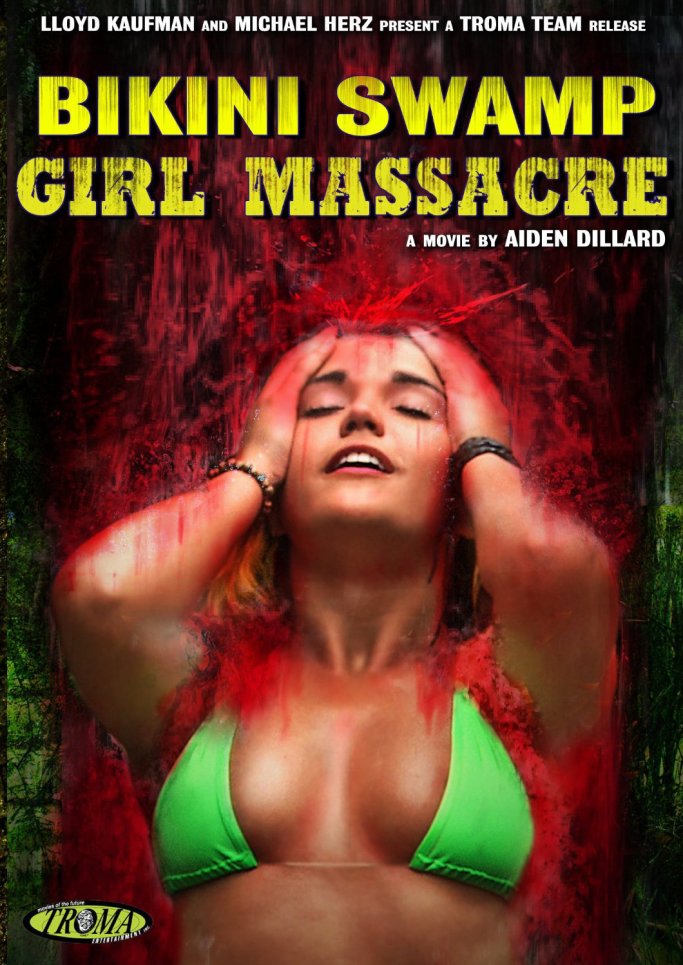 Bikini Swamp Girl Massacre (DVD) – Even the flick is released in 2014 under the Troma label it is set in 2007 on Columbus Day weekend. Lloyd and others had nothing to do with this film other than picking it up for distribution so don’t get all crazy if and when I do not like the flick. On this so-called holiday weekend a group of women go into the Everglades to party hardy! Only one of them made it out to tell the story and this is her story. Supposedly every few years weird shit happens around Columbus Day in the Everglades and that didn’t stop these college girls looking for a good time. Supposedly it is haunted by a Seminole spirit who has a few things: a cage for his captured white woman, a trailer for him to hang out at and his dead wife, a ham sandwich for his white woman, and a boat to ride across the swamps. Okay now saying this out loud I believe this film is hilariously awesome in such a bad way as you should only watch with friends. Honestly I was expecting more boobs but I will forgive yinz as just writing this review made me laugh as I give this flick 1 ½ stars.

Naked Massacre (DVD) – Right out of the gate in this flick we are introduced to violence as a Vietnam vet sits and witnesses first hand a church bombing in Belfast. Supposedly a couple sources claim this film was based on the Richard Speck murders? It’s 1975ish and this US vet is wandering the streets of Belfast until he walks past a house full of nurses. This soon becomes his obsession as he watches day and night until his opportune time to make his move inside claiming he just wants money to get home? But quickly after the women are bound it becomes clear this vet is here to slowly torture and rape these innocent nurses. A pretty fucked up movie that I am surprised more the horror community hasn’t stumbled upon and made a bigger deal out of it as I give it 2 ½ stars.

Exterminators of the Year 3000 (Blu-ray) – I will be honest I thought I watched or tracked all the Eye-talian, Spanish, Canadian, etc. post-apocalyptic flicks I could find last year… Well I missed one and this was some good post-apocalyptic fun! A lone stranger only known as Alien wanders the Wasteland to come across a kid who wants to help his village get water. The world of course has turned into a desert a kid Timmy believes he is the last hope since his father didn’t come back. He hitches a ride with a group of villagers who must travel a horrible road of 180 miles that has crazy ass bikers led by a bad bootleg Vernon Wells. The bikers kill the group but know the water’s location now. Timmy is picked up along the way by Alien only to be sold out to the biker gang and have robotic arm ripped out. Nothing here to explain Alien is just like, “I know an old guy that can fix that”. So while Timmy gets fixed up, Alien with his sidewhore oh I mean ‘Trash’ go get the water. Of course Alien wants it for himself to sell to the highest bidder but has a change of mind when he takes on the crazed bikers by himself in his steel plated car called “The Exterminator”. Not much plot wise but still a lot of fun especially when they all just totally get why the kid is a cyborg or something as I give this gem 2 ½ stars. 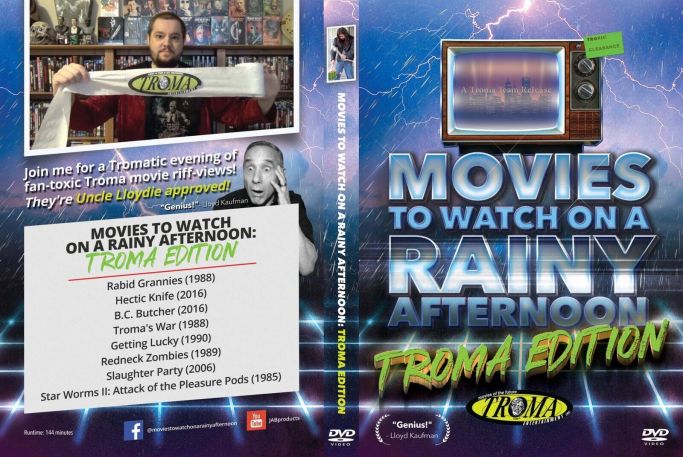 Movies to Watch on a Rainy Afternoon: Troma Edition (DVD) – Most likely Troma’s biggest fan Addison Binek known for his riffs on so many movies decided to put together a collection of Troma riffs. Now Addison being a smart dude didn’t just go for any Troma titles he went for the second tier! Maybe the lesser known to some to maybe open some eyes new to the Troma or Addison Binek world. Here is the list he tackles: Rabid Grannies, Hectic Knife, B.C. Butcher, Troma’s War, Getting Lucky, Redneck Zombies, Slaughter Party, and Star Worms II: Attack of the Pleasure Pods. Now not all titles were from the minds of Lloyd and Mr. Herz but some brilliant pick-ups for the label a fun selection that makes you wonder where Addison gets all that Troma money for the props. And instead of condemning something of this nature Lloyd embraces Addison’s fandom and intelligence to put together a great product for all of us movie lovers to enjoy as once again I give his project 4 stars.

Godzilla: King of the Monsters (On Demand) – It has been five years since the giant radioactive lizard had shown up in San Francisco and of course us humans suck huge ball sack! Now the monsters are being released one by one to possibly keep Earth in balance until it is learned Ghidorah is not of this Earth and may be here to actually form it into his own. Which means Godzilla is here to save the humans… maybe. It is an absolute fun giant rubber monster flick that gets you very excited for Kong’s return. Yeah at times it seems the actors get in the way of the story but they are there to keep the story moving and who doesn’t love Charles Dance aka Brother Nupsie as the villain. Honestly not a lot can be said other than if you like the past giant rubber monster movies then you will enjoy this if not most likely you will never understand it as I give the film 3 ½ stars, now bring me Kong.

Killersaurus (DVD) – A UK flick that does their own bootleg generic version of “Carnosaur” where some research scientists literally will a dinosaur into existence with a 3-D printer! I don’t know if I should laugh my ball bag off or just be disappointed it took this long for this idea to be put to screen? With such an awesome beginning premise for a film it soon turned into a stale turd as people just keep talking about the dinosaur behind the door. And once seen it’s in horrible red light to hide the bad effects and it doesn’t eat everybody… For the love of Rutger Hauer I wanted a cheap dinosaur rampage movie instead got something that was a poor excuse for a film and Dollar General I want my two bucks back as I give it 0 stars.

Zombie Tidal Wave (SyFy Channel/DVD) – So Ian Ziering won’t go away but that isn’t such a bad thing when it comes to cheap weirdo shark and zombie films that show up on SyFy Channel once a year. Ziering is a lifelong seaman who encounters a blue weirdo out at sea that has just bitten one of his friends. Rushing back inland for help apparently this odd blue light out at sea starts off a zombie apocalypse that is brought in by a tidal wave onto a small town in Thailand I believe? Anyway next thing you know a bunch of random zombies and blue zombies begin chomping their way through the populace. The film has its moments of cheese but just for old 80s creature movie sake (Humanoids from the Deep) I had hopes of them explaining or doing a little more buildup of the pharmacy crap that supposedly went down in 1985 story wise? Anyway: blue zombies, Ian Ziering, an electrified knife, all this 2 star movie was missing was hot mess of a woman Tara Reid’s jacked up boob!

Slaughterhouse Massacre (DVD) – This odd low budget horror film that I guess could be classified as a slasher was a little bit of a surprise. Wasn’t expecting much but of course had massacre in the title so I needed to watch it. Anyway a group of friends leave Dallas College onto a party where this group learns of an urban legend “Marty Sickle”. Supposedly Marty lived in a local slaughterhouse and was accused of murder but the charges could not stick. So some of the locals took upon themselves to serve justice… it was like an alternate version of “Pledge Night”? So the four college kids head to the slaughterhouse to pussyfoot around and BINGO! They disturb Marty Sickle who really wasn’t dead and pissed enough he starts hacking the four to bits. This is one those enjoyable gory Indy flicks that make you glad it exists as I give it 2 ½ stars.