Scare Me (Shudder) – So this was the other horror film released this year with the same title ‘Scare Me’ where two strangers meet in the middle of nowhere to tell each other stories. Fanny and Fred meet while jogging one morning. Fanny – the best-selling scary and Fred – some random dude who works on ads and tries to get away from real life to see if he can make his dream happen? A power outage sends Fanny over to invade Fred’s space or cabin to order pizza and tell stories to each other. This would have made a great teleplay to play out on radio that I have listened too on many Friday nights driving back from Cinema Wasteland. I know I am going to catch heat for this popular film. But if you like an over 100 minutes of two actors who are reading a script to you the viewer and Chris Redd from SNL does cocaine halfway through for a break then you’ll be in your glory! I personally found the movie meh and not for me but I believe this was a film literally aimed at a certain audience and that was it as I give it 2 stars.

The Reflection (YouTube) – A super creepy short film from filmmaker Philip Brocklehurst where a man looks into the mirror too long and sees another reality. Scary thought is the other reality wants in more often than not as I give the short film 3 out of 4 stars. 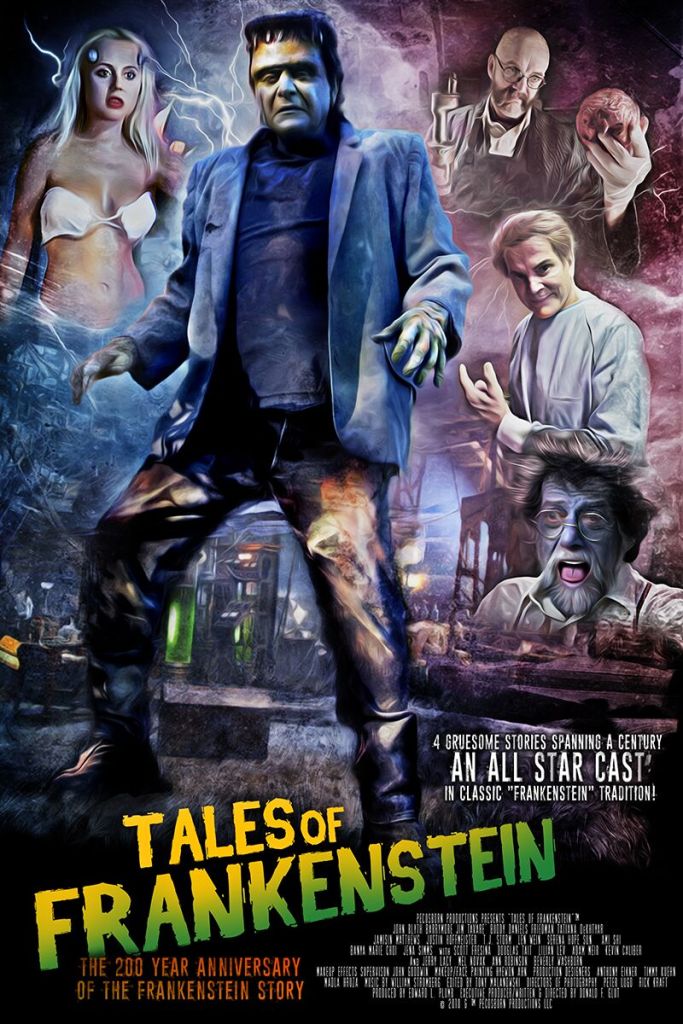 Tales of Frankenstein (Vimeo/DVD) – This is an anthology that is a little different and interesting for ‘Frankenstein’ fans. Donald F. Glut takes some of his short stories he written and turns them into a film that Victor Frankenstein is the running theme throughout the anthology. The stories are set from 1887 to 1957 and vary throughout: the first story gives us an origin and a love story, the second is about greed, the third is a film noir involving a detective and a mad doctor, and the last story gives Frankenstein fans a little of everything including being set in Transylvania. I absolutely enjoy the twist on an old monster and its tales and doing it in the format of an anthology works brilliantly! A couple decades ago the film ‘Frankenstein Unbound’ proved you can tell a perfect story differently and if anything add to its mythology. Mr. Donald F. Glut does this without effort but my only complaint is the film looks way too clean (if that makes any sense to yinz film junkies)? Cinema fans this independent anthology is worth tracking down and making it a part of your collection and for friends to enjoy as I give it 3 ½ out of 4 stars.

Big Freaking Rat (DVD) – This film is a prime example of an idea that could be so awesome but ruined because nothing was totally seen through and looks more like crap just being thrown at the wall. Now I never expect an amazing giant rat movie every time out but I do expect a legit fun rat movie and this was not it. The film stars Felissa Rose a favorite among most horror fans who stars alongside a park ranger named Chief Brody who has supposedly help clean up a camping destination that was abused for years. Unbeknownst to him because two hillbillies dumping toxic waste into the lake a “Big Freaking Rat” is running around beheading humans and munching on their flesh to live. Before he can ever get the camping site up and running he must deal with the large rodent issue as it quickly boils down to teenagers and an exterminator vs. a large rat which was done with practical effects most of the time. Instead of keeping it simple and giving us a long lost SyFy Channel flick we get a movie that has you asking way too many questions during it instead of enjoying the “Big Freaking Rat” as I give it 1 star.

Theater of Blood (DVD) – An absolute gem of a film starring Vincent Price who is a stage actor about to make a comeback. His critics were so rude and shitty to the great Shakespearean actor he commits suicide in front of them. Two years go by and the critics start dying of horrible deaths in Shakespearean ways. Some of them believe the great play actor has returned from the grave but the authorities have trouble believing the story. But as the bloody bodies keep piling up they need to close this case before all the famous London critics are dead. This was my first time watch and like ‘House on Haunted Hill’ it just seems Vincent Price does his best work when the filmmakers allow him just be Vincent Price. Some decades have passed since this film’s release but this is an absolute treat for any horror movie fan as Vincent Price playfully allows his goons to destroy his critics until the ultimate climax! I just smiled how wonderful this film was from beginning to end as I give it 4 stars.

The Mummy (DVD) – This 1959 remake of the Universal Pictures classic got many people to pay attention to Hammer films as it stars Peter Cushing as John where his father, friend and himself discover a long lost tomb of Princess Ananka. When they open it they are warned to leave it alone or a curse would fall upon them. After the tomb is opened and some time passes the Mummy (played by Christopher Lee) is revived by a scroll and it wants revenge on all who were a part of opening the tomb. The film is absolutely beautiful looking but Christopher Lee literally steals the film as The Mummy and how he portrays it. Never got into Hammer Studios this is a good place to start as I give it 3 ½ stars.

Sebastian’s Unholy Flesh (YouTube/DVD) – Dakota Ray’s (writer, director, and actor) latest effort is about a shift in the universe or this case Lucifer dying for an unknown reason. This sets in motion a demonic presence known as Sebastian who sets forth and becomes flesh in order to obtain “The Unholy Book”. Just because this old evil is looking for the book that can destroy all mankind doesn’t mean other unholy evils are not looking also. The book changes hiding places on a regular basis but Sebastian quickly learns how to get it but keeping it becomes a much bigger issue as other demons want to fight to death in order to handle this great power! Dakota Ray goes super dark with this evil flick and is a cool slow burn. My only complaint on this ultimate evil tale might be I was expecting a satanic bloodbath but never got it. Understand that did not stop Mr. Ray and crew from putting together a fine tale about what would happen if the devil died? I give the film 3 out of 4 stars and can purchased at https://www.storenvy.com/stores/868254-dakota-ray-r-a-productions .