Walk like a Panther (On Demand) – If you enjoy wrestling movies then you are in for a treat from the UK folks. Mark Bolton is the son of ‘The Bulldog’ one of the original British wrestlers that ran together called, “Panthers”. They use to be on the tele in the 80s and then were canceled to the dismay of many. Mark never got his shot with the Panthers but now runs a pub called “The Half-Nelson” where all the old wrestlers and fans hang out at. They talk about old times, drink a pint, and wait for Mark’s wrestling trivia night. But things change when Mark’s idol Ginger Frost dies. They all go to the pub for the wake and interrupted by a young village idiot who believes wrestling is fake. So when the old timers get a hold of him and start having a good time at his expense as his friends film it on their phones and it goes viral. Between this hilarious turn of events and the pub being sold from under young Mark’s hands he decides to get “The Panthers” back together again for an one hour event to save the pub. Stephen Graham, Julian Sands, Robbie Gee were an absolute hoot in this flick. Maybe not the perfect film but there was many times I laughed my ass off at the screen as I give it 3 ½ stars.

The Dead Don’t Die (On Demand) – The latest zombie film to have Bill Murray and a host of other Hollywood names take on zombies in a small town. Bill Murray and Adam Driver are cops of the town Centerville where their highlight is yelling out in the woods at a hobo that Murray’s character knew since high school. But polar fracking has knocked Earth’s axis funny and it has caused several weird things to happen: Prolonged daylight, animals going completely nutzoid, and Iggy Pop and other dead folk to rise from their grave. With no answers but many questions the film becomes one long Seinfeld joke. For good or bad the zombie make-up was cool but I was expecting a little bit of a different movie as I give it 2 stars. 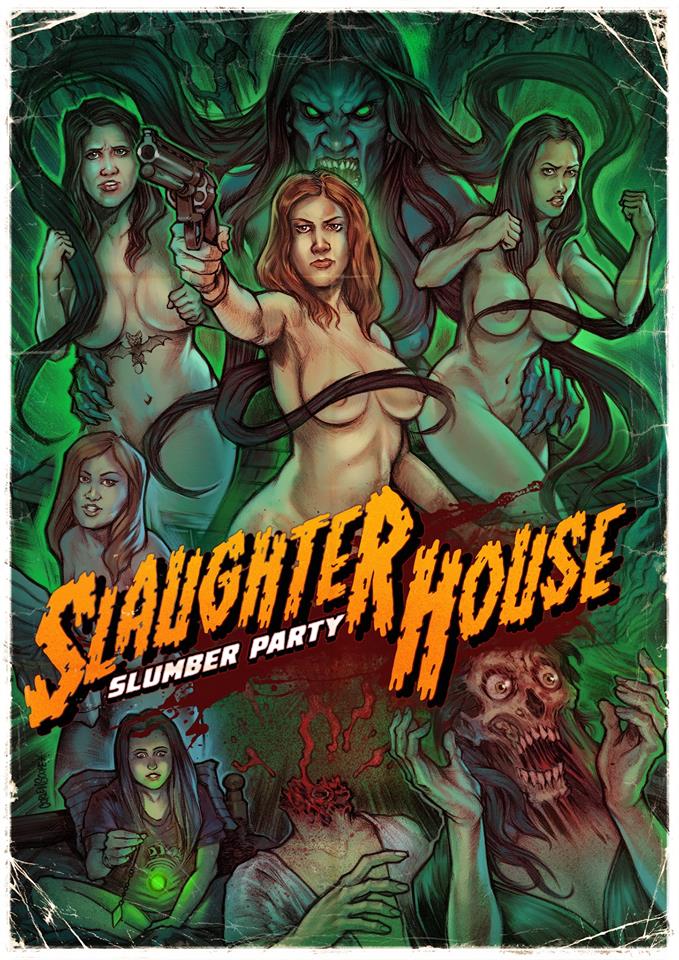 Slaughterhouse Slumber Party (Blu-ray/Vimeo) – Dustin Mills has quickly become one of my favorite filmmakers as he has made all kinds of different horror films. Always trying something different and this is no different for this unapologetic cheesy film about a group of young women getting together once a year for a party weekend. At times shot like a “Big Brother” or “Real World” TV show you get to know all the women and their flaws who are attending this big weekend party. Of course no boys allowed but a new girlfriend Gretchen, has been brought into the event meeting new people and enjoy the fun of being free, drunk, and hope not to have your face farted on! Anyway Gretchen seems a little strange and not all about the new Rocket Ribcage film. Gretchen is more into bringing forth evil supernatural shit. Never thinking much about Gretchen’s weirdness she is accidentally killed in a pillow fight and thus starting off a bunch of demonic bad shit happening to the women. The friends mostly naked and frighten must gather the strength to take on this horror and escape the wrath of Gretchen! If there was ever a movie to be put on a double bill with “Sorority Babes in the Slimeball Bowl-O-Rama” this is it my friends and that is high praise coming from me as I give it 3 ½ out of 4 stars. Dustin be proud my friend and that cast was awesome!

Spider-man: Far From Home (On Demand) – The Avengers have disappeared again and Tony Stark is dead. They all saved the world but Peter just wants to get back to normal high school life and that means going to Europe with MJ and friends. This being Peter’s big chance to finally ask MJ out but course things go sideways when Mysterio shows up fighting monsters called, “Elementals”. Nick Fury needs Peter to take over for Stark and help fight these fights. Peter still just wanting to be a high school kid decides to let Mysterio do the job until he learns of the real plan. This newer version of Spider-man was again a lot of fun and really enjoyed the end credit stuff but the real shame is going to be Disney and Sony fighting over the property. Which means most likely we won’t even get to see Tom Holland in college as Spider-man. Fun movie I give 3 ½ stars too but most likely we will see two more sequels to everything else before this problem gets resolved so enjoy it folks.

Video Murders (DVD-R/VHS) – Jim McCullough Jr. brings us a lower budgeted film about a serial killer David Lee Shepard. The film opens with David bringing a hooker back to a hotel for the intent of filming her strangulation. The detectives have gotten closer to David as he has left a trail of murder scenes in different cities but with the same motive. The rest of the film entails a detective in not one but two long chase scenes with David. There is some filler with David picking up a woman in a bar because she reminds him of his mother and does not kill her but keeps her tied up. The movie teases this will be sleazefest but is more of a dramatic cat and mouse thriller between David and the detective as I give it 2 stars.

The Dark Days of Demetrius (DVD/Vimeo) – Independent filmmaker Dakota Ray is back with his latest film about a serial killer called “The Live Stream Killer”. This man streams his murders and has a following on social media which in turn he allows his so-called fans to comment on photos and videos. Demetrius desire to kill is consuming him and gets off on that his following is growing by the hundred-thousands with each post. Eventually LSK allows the audience to decide the fate of his victims taking his murderous ways to a new height. But a sadistic reporter of a news website takes notice of LSK and begins to blame him for murders he has nothing to do with in order to have more content for his site. Demetrius can stay as a mystery to police but makes himself known to the reporter who is trying to stain The Live Stream Killer’s name. This is for sure one those hard-hitting films that are not for the fate of heart as it isn’t so much sleazy as much as just one of the darkest films you may watch… For that I give Dakota’s feature 3 out of 4 stars.