Primal Force (DVD/YouTube) – A 1999 TV “UPN” premiere film that pits Ron Perlman versus genetically-engineered monkeys! Mr. Perlman plays a character named Brodie who had a run in with these mutations on an island outside of Mexico. Ten years ago, Brodie and some others were brought in to be guides to the rich who wanted to hunt big game, but not just any big game. Some crazy ass scientist is playing god and has someone funding him to give them bad ass animals for the hunt and the island. A few rich people get killed during the hunts and the monkeys who were experimental were supposed to die but instead became the hunters as they grew smarter and took over the island. Brodie barely escaped but is still haunted by the nightmares of the event. But Brodie must go back as he is approached to be a guide for a rescue team as a plane has crashed in the middle of this uninhabited island. From there it becomes Ron Perlman versus bad ass monkeys and it is fucking glorious stuff! Don’t walk but run to see this rather unknown gem as I give it 3 ½ stars. This film is further proof that I believe people are sucking movie ideas from my head while I sleep???

Deep Space (VHS/YouTube) – Horror fans this isn’t that that weird sci-fi flick that stars Charles Napier that took forever to show up on any format outside of VHS in 1989/1990… This is that Marc Singer sci-fi feature where he plays Commander Krieger and receives a distress call from some scientists. Yes folks, this is the reason I exist so I can watch it so you don’t have too! But moving on when Krieger and his cheap ass robot show up to rescue the scientists not all feel it’s an emergency? They just happen to be messing with a mutated virus which has mutated again into a cheap looking but effective alien creature that wants to fuck up humans. What is interesting about the creature is it’s made up of every disease known to man so all it has to do is touch you to kill you. That’s some fucked up cool shit for a B-movie. I give it 2 ½ stars.

Blue Monkey (VHS/YouTube) – John Vernon just happens to run a hospital that just so happens to be testing a laser thingy? Well of course some old dude gets pricked by a foreign plant at his woman’s greenhouse that basically gives him a heart attack and a weird bacterial infection. The infection eventually sends the hospital into lockdown which randomly has Joe Flaherty from SCTV and his pregnant movie wife at the hospital trying to give birth. It has nothing to do with the story but come on we all love Joe! Meanwhile Steve Railsback and a doctor are trying to track down the infection that has mutated into a creature with a Nintendo gun… That is before the government just runs and burns the place to the ground because they consider it a “Class 4 Quarantine”. The 1987 film was also known as ‘The Insect’ but let’s be honest I don’t think many horror fans knew or cared about this lackluster horror film as I give it 1 ½ stars. 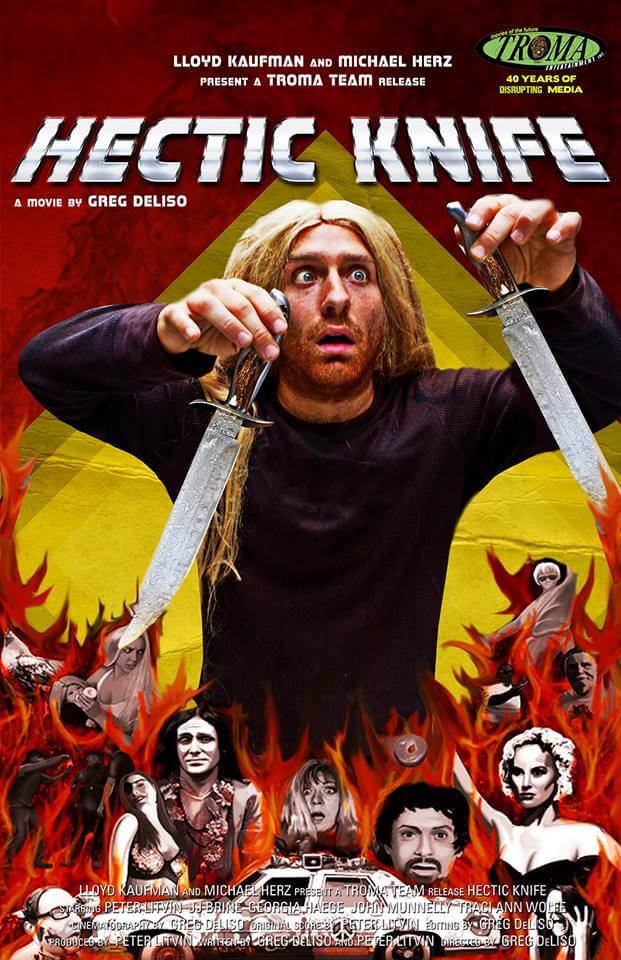 Hectic Knife (DVD) – Let’s be honest folks most of us are Troma fans and we know Troma pretty much has become a distributor of independent films. Hey Troma has to survive just like any other small movie company. 99% of the time the newer Troma stuff that is released is to make them money and keep them afloat and really doesn’t have anything to do with the Troma legacy? Well folks, I am to say ‘Hectic Knife’ is a different but Troma-like film that has come out of nowhere. The film is about a new knife-swinging superhero named ‘Hectic Knife’. He kills rapists, gangsters, junkies, but like the rest of us normal people he has to pay bills, needs a roommate, struggles with all the killing, and no girlfriend. But when ‘Hectic Knife’ comes into contact with a professional baddie named ‘The Piggly Doctor’ he must risk his own life to defeat this new baddie. Hilarious over-the-top violence, bad jokes, bagels, a hippie, and the vibe the film gives off while watching it is like the stuff of second generation Troma films. Let me explain: first generation is “Toxic Avenger and Class of Nuke ‘em High”, second generation is “Tromeo and Juliet and Sgt. Kabukiman”. It fits in with the 90s Troma stuff which is a good thing. The movie just has that Troma vibe that makes you wonder if Lloyd may have been on set. Troma should be more than happy adding this feature to this their library it’s one of the few flicks that understand what Troma is all about and for that I am thankful! I give this fun flick 3 ½ out of 4 stars and definitely one of the better films of 2017! Go get it now folks www.troma.com as there isn’t enough good things I can say about this independent flick.

Angel Heart (DVD) – Robert DeNiro is the devil and Lisa Bonet gets banged to death so bad the “Cosby Show” shunned her and her movie career. This weird voodoo/film noir flick gets 2 stars. The film keeps you interested until it ends and leaves questioning why?

Jocks (DVD) – Completely forgetting this Donald Gibb flick exists, shame on me. Decided to wander down “Tim Gross USA Up All Night” memory lane and rewatch this hilarious stupid sex comedy that sat on the shelf for over a year before its release. Richard Roundtree is the coach of a tennis team that is a bit unorthodox but wins a lot of matches and they are in Vegas for the championships. Boobs, booze, and Donald Gibb nailing a dude in the balls with a tennis ball to win the match are the highlights of this fun late night memory. And want a fun one it is as I give it 3 stars.

What’s wrong with Mom? (DVD) – Leave it to independent filmmaker Jim Roberts to make a short film about his mother being sick. When he gets a call from his brother Eric to go visit mom, he is expecting her to have the flu not have a hunger for flesh. Gory, fun, and to the point is what makes Jim Roberts one of the best and one of my favorite filmmakers out there in independent film land as I give it 3 ½ out of 4 stars.

Convoy (DVD) – A late 70s film that became an early HBO 80s regular run feature is about a misunderstanding between truckers and a cop who goes over the line to bring the law down on them. When the truckers refuse to obey we got a “CONVOY” through the state of Arizona that eventually has the Rubberduck getting shot to pieces near the end of the flick. Too this day not totally sure what is the plot of the film exactly but what do want for a film that is based on a country song written in 1975 when CBs were a big thing? If you are over 35 you are old and most likely remember this nonsense that stars Kris Kristofferson, Burt Young, and Ernest Borgnine! The back story of the film sounds a hell a lot more interesting and worth taking a trip on the google machine to find out more as I give it 2 ½ stars. It’s no ‘Smokey and the Bandit’.