We Die Young (DVD) – A story about a young drug runner for the MS-13 gang named Lucas in Washington D.C. He tries to watch out for his younger brother and has made friends with an ex-military vet Daniel (Jean-Claude Van Damme) who he delivers to on a regular basis. Both humans are just trying to do the right thing for others. When Lucas gets set up during a run he and his brother are on the run from the MS-13 because they must die for their betrayal. They jump into Daniel’s car and from there it’s stop and you will die. Not your typical JCVD action flick but the film has a lot of heart and an interesting storyline that made the film well worth checking out as I give it 3 stars.

Good Against Evil (YouTube) – Richard Lynch as a man into Satanism named Mr. Rimmin and a young Kim Cattrall showing up, yes I’m in! A baby is born and stolen by a nun to be taken to Mr. Rimmin and he explains to his legion that the child must be protected at all costs. 22 years later in San Francisco we meet Jessica Gordon who designs clothes. Her new car gets dinged up by a gentleman named Andy Stewart who tries to get Jessica to go to dinner with him but no luck. Andy persists until Jessica is down for it and eventually they become a couple but strange things like people dying keep happening. These folks that are dying are followers of Mr. Rimmin trying to protect Jessica and try to break up the lovers constantly. I enjoyed the movie but just not enough scenes of Lynch being an evil bad ass as I give the film 2 ½ stars.

Ghost Riders (YouTube/VHS) – Here is a random 1987 I never knew about that I was super excited to watch and… then I did. Anyhow Frank Clements is hung by a vengeful priest in the old west. A hundred years later a Professor Sutton discovers Clements is back from the dead the hard way. Luckily for the Professor his random friends and son are coming for a visit and shoot the ghosts. But hey folks they soon find out they been shooting down the same ghosts over and over and must come up with a new plan to save all their asses! That is when they get back to the Sutton cabin and find out their grandpa was the priest that hung Clements. Yep a boring revenge flick that should have been so much better but turns out to be a snoozer as I give it 1 star.

Survivor (VHS) – It has been ten years since the war and a man/astronaut travels by a solar-powered train car looking for a so-called paradise. There is a story about an underground paradise that is ruled by a man named Kragg (Richard Moll) and scientists. Once there it isn’t what it is cracked up to be so the space man is challenged by Kragg. Kragg is amazed to find out the space man is the one who put the satellite into space that caused the war and gives a good long speech about the ‘New World’. Not one of the best post-apocalyptic flicks out there but an interesting take with the whole underground city and such plus Richard Moll as I give it 2 stars.

Strike Commando 2 (YouTube/VHS) – Our man Vincent Dawn aka Bruno Mattei goes ripping off several 80s action flicks of where a vet Michael Ransom is sent in by the CIA to go looking for his old commander Jenkins. There is a whole double fake of Jenkins being hidden by the CIA but is actually double crossing the CIA and working for the enemy and has Ransom bringing diamonds for the payoff. Once Ransom understands what is going down, Ransom and his new blonde friend make a plan in the jungle to screw them all. Oh yeah in case you needed to know Jenkins was working for the KGB… damn it I gave it away. It’s fun B-movie follies for all to enjoy as I give it 2 stars.

The Lone Runner (YouTube/VHS) – A mid-80s flick from Ruggero Deodato about a superhero in the desert known as Garrett or Lone Runner. Once ten years ago he saved a little girl and some folks from some bandits. Now ten years later he is back to save her again as her father is being blackmailed for some mysterious diamonds that many people didn’t believe existed. We get some cool horse riding stunts and see Garrett take on a whole army of bandits. It isn’t the best of Deodato’s work but I love finding this stuff and thank the lord Rutger Hauer this filmmaker exists as I give it 2 stars.

Firewalker (DVD) – A hilarious action/comedy in the spirit of Indiana Jones in ways starring Chuck Norris, Louis Gossett Jr., Sonny Landham, John Rhys-Davies, and Melody Anderson! Max and Leo are hired by Melody’s character for a treasure hunt, yeah they are not real successful in the past but this time is different. It is an interesting movie for the mere reason it takes Chuck Norris out of his comfort zone but the chemistry he had with Louis Gossett Jr. is great as I give this film 2 ½ stars.

Road Hell (DVD) – This relative low budget flick centers around a high-strung couple who have to stop at a seedy motel because they need sleep and to POOP! This intro of the creepy motel is for an anthology that has a vampire orgy, a kid wanting to take on an unknown creature in the woods that ate his dog, and profiling a zombie exterminator. The couple wrap around doesn’t have much to do with anything other than asking for a new room in between segments. When picking anthologies this might be the choice yinz all will wanna pass on as I almost feel asleep twice trying to make it through it. For that I give it 0 stars.

The Final Terror (DVD) – This slasher film has alluded me long enough as I knew it existed but not as ‘Campsite Massacre’ also. This star studded affair (Mark Metcalf, Lewis Smith, Adrian Zmed, and Darryl Hannah) is about a group of inexperienced rangers heading up north to Old Mill Creek for work and some partying. Old Edgar warns them about getting hurt and going somewhere else but this is the early 80s they don’t listen. After a joke that night goes a little too far when one of them don’t come back looking for someone’s weed crop they search for him all day with no luck. But now this thing stalking the woods is now hunting the rangers as they must make their way down river as they are tired and injured. With the cast I hoped for another ‘The Burning’ but got a less eventful slasher film instead and I give it 2 stars.

Jurassic Galaxy (DVD) – What feels like an Asylum film or a SyFy Channel flick is not as a spaceship crash lands and falls to pieces on a planet ruled by dinosaurs. The survivors if they can survive each other must make their trek across the treacherous planet to find the escape shuttle to get a SOS out in space. It wasn’t as terrible as I thought it was going to be still surprised neither of those factions had anything to do this with this terrible idea as I give it 2 stars.

Nazi Undead (DVD) – Brad and Ash are off to a castle in the middle of nowhere Germany when the car stalls out and a woman runs to the car to smack it and then die. So eventually the two get out finding help, but instead finding an old house with a paranormal creepy old German guy and backstory that replays a couple times during this dumb ass fucking movie! Candidate for worst movie I have watched in 2020 as I give it 0 stars. 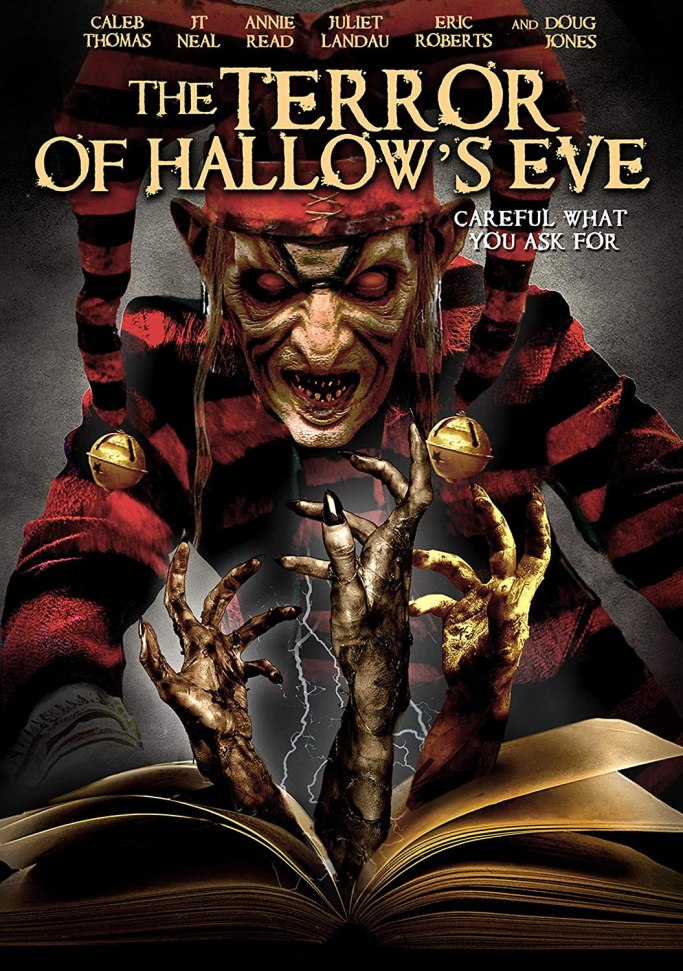 The Terror of Hallow’s Eve (DVD) – Another film claiming to be based on true events that takes place on October 30, 1981 where a young teenager Timmy is very talented and likes to play pranks on the neighbors. He gets in trouble with his mother and promises not to do any pranks on Halloween so he investigates the attic and finds “The Book of Halloween” and reads about the ‘Trickster’. Timmy after getting the shit kicked out of him by three high school assholes he turns to the Trickster to help him scare them to death. Of course the trickster takes it literally and eventually with the help of Timmy’s imagination kills them all. Thus sending him to an asylum where the end of the film explains more about his story at present day. It is a solid Halloween horror film but wasn’t a big fan of the ending as it felt like padding or filler to stretch the film out. I liked the storyline, the cool under the radar Hollywood stars in it, but the ending for me was not needed but didn’t spoil the end product as I give the film 3 stars. 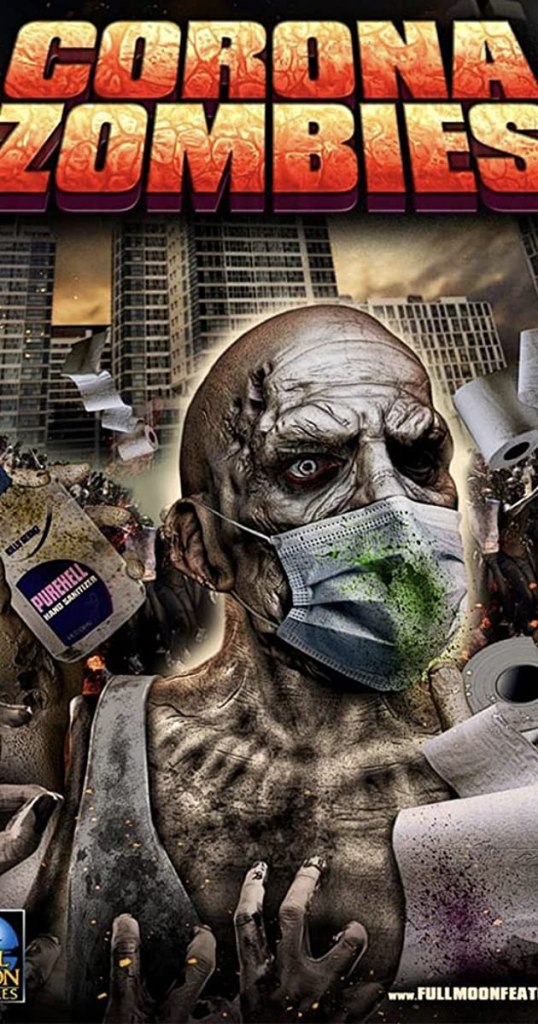 Corona Zombies (On Demand) – This latest Full Moon feature takes place in the Bodega Bay Trailer Park where Barbie has just learned about the Corona virus from her bestie Kendra over the phone. She turns on the news to learn the virus is getting out of control and now there might be ‘Corona Zombies’ as the virus is turning certain ones into zombies. But the real problem is Barbie doesn’t have toilet paper and she is like so bored. Barbie goes into panic mood as she watches the news showing live footage or I should say overdubbed footage of two other zombie movies throughout the newscast. Kendra tries to help Barbie through the phone to keep her calm but nothing says calm like finding an eight pack of TP! To be honest I have been critical of Charles Band and company which sucks because I love Full Moon and I believe we all were not expecting much from this project… But this project is fucking hilarious and makes me wanna go back and rewatch ‘Hell of the Living Dead’. This film will not be for everyone but for everything that is going on right now Charles Band might have a diamond in the rough with this project that shows maybe all humans need to calm down and watch something not so serious? But also thank you Charles Band for this project not being an infomercial for ‘Evil Bong’ and the latest crap on Full Moon Streaming as I give this 3 stars.