Fist of the Northstar (DVD) – Gary Daniels stars in this movie adaption a very popular comic in 1995 where he is a warrior in a post-apocalyptic landscape that must restore balance to the world. He is a warrior named Kenshirô who has been forgotten and believed dead until he resurfaces years later on a new path to fight Lord Shin who has kept the world in chaos. Has some Hollywood names and Gary Daniels did fine but the film has not aged well since its cable television premiere. Does it deserve a reboot? Possible but most likely get the same response when it first was released which wasn’t much here in the states as I give it 2 stars.

Escape Plan 3: Extractors (On Demand) – Stallone, Batista, and 50 Cent are at it one more time as a former associate’s son seeks revenge by kidnapping Stallone’s girlfriend and taking her to a hideous Russian prison. Not ground breaking but entertaining action sequel that keeps your interest enough to finish it and whet your appetite for the new Rambo film coming as I give it 2 ½ stars.

The Two Faces of Dr. Jekyll (DVD) – This Hammer film takes a little different take on the story as Dr. Jekyll is a scientist who is married to his work. Constantly experimenting he believes he may have found something that could revolutionize the world. In past versions of this story Jekyll turns into a horrible looking Mr. Hyde. Where in this version is the complete opposite where Jekyll turns into a handsome Mr. Hyde who spies on his wife banging Christopher Lee and flaunting it all around town while he works day and night. For Mr. Hyde it is not enough he wants to relish all the sins of the night life until it’s too late and he tries to fake his death. Not the best Hammer flick definitely worth the watch as I give it 2 ½ stars. 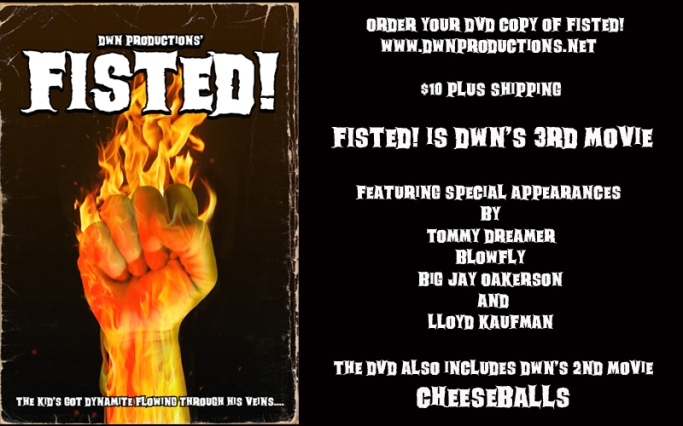 Fisted! (DVD) – It is that time of the year again where friends head to the woods to have fun. But that comes to a screaming halt as giant ants eat porn stars doing their thing and a dude named Jerklin Boy destroys his victims with his ‘Fist’! When this killer uses his fist on his victims their heads explode. The Jerklin Boy looks like a generic Leatherface which only adds to the hilarious kill scenes in this Tom Martino feature. If that wasn’t enough Joe Garcia makes sure you will never look at a potato the same again. I laughed my ass at least a dozen times watching this as Mr. Martino has his own unique style of storytelling and makes his own movie rules up. “Fisted!” is entertaining as hell but not for the humans that have no humor in their lives as I give this feature 3 out of 4 stars and can be found at www.DWNProductions.net .

Eyes of Fire (DVD) – In 1750 a couple kids wandering the woods along the river bank are picked up and tell a French soldier a tale of why they left a haunted forest. Story begins with a priest who has stolen another man’s wife and has convinced a few villagers to steal a ferry, food, and begin a new adventure. An adventure of them floating down the river and finding land they can call their own and live the way they want to live. They want to find what they consider the promise land. After having a run-in with some Indians they go deeper into the woods where the natives believe the woods are haunted by evil spirits. The group finds a burned, wrecked cabin that they decide to settle and rebuild. But weird things almost immediately begin to happen to the group and the priest relies a lot on a young woman known as Leah who is a witch. Odd film for 1983 but just interesting enough I was glad to track this one down and check it out as I give it 2 ½ stars.

The Toy Box (DVD) – I always enjoy a completely off the wall idea that involves horror movies. The weirder or combining characters the better until I came across and watched this film that stars Denise Richards, Mischa Barton, and a bootleg Michael Caine. Bootleg Michael Caine wants to take a trip in a used RV with his family after his wife’s death. What bootleg Michael Caine doesn’t know is it is haunted by the spirit of a serial killer. The serial killer many years ago used the RV as his traveling killing zone. This movie was super lame and poorly executed. Thus proving maybe not all completely crazy horror movie ideas should be made as I give it a ½ star.

Boarding School (DVD) – A surprisingly different horror film that does a slow and interesting burn about a boy about to be a teenager whose grandmother has died. Quickly the boy Jacob becomes obsessed with his grandmother he never knew. This leads to the parents finding him in his grandmother’s dress and BOOM! Off to boarding school. But not just any boarding school? A very elite boarding school where a teacher played by Will Patton takes his job serious and has a strict way of kids being schooled. What seems like a horror film that is going to play with the gender bending rules goes into a very mysterious direction as the class is filled out with kids that maybe different and have a handicap. This slowly blossoms into a wonderful horror film as kids begin to show dead almost on a nightly basis. This film has some cool sick shit going down and I like it as kids die and the film keeps you guessing of what will the characters do next as I give it 3 ½ stars. 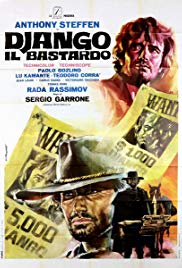 Django the Bastard (Blu-ray) – I have always enjoyed the Clint Eastwood westerns and only recently have scratched the surface of all the other spaghetti westerns from the past. This was a first time watch and a wonderful one at that as I did see the similarities in this 1969 film that Eastwood did later. The film is also known as “The Strangers Gundown” is about a mysterious man named Django who was believed to be dead many years before. He walks right in town, places a cross in the dirt with the man’s name and date of death. This is just bad ass! Through flashbacks of the Civil War we come to learn Django and his fellow troops were abandoned by their leaders and he has been searching for the three for years. Anthony Steffen has the stare down as he just shows up in town and takes on a whole gang of gunslingers wanting the last man he is looking for. This western actually separates itself from many of this time as it almost has horror movie kinda feel with how it is shot. This maybe my first watch but it will be watch many times more in the future as I absolutely enjoyed the colors and the horror overtone of revenge by Django. The Blu-ray looks beautiful and the commentary by the historian is very interesting if you are a fan of the spaghetti westerns as I give it 3 ½ out of 4 stars. Of course you can find this at www.synapse-films.com .

Critters Attack! (DVD) – Another poor attempt of getting this franchise off the ground again but at least nowhere annoying as “Critters: A New Binge”. A young lady Drea who is stuck living with her uncle and having trouble getting into the college her mother went too takes on a babysitting job that may help. Soon Drea and her brother get caught up with a Critter princess who has come to Earth to kill the male Crites. It becomes a retelling of “Adventures in Babysitting” only with Crites and Dee Wallace. Their heart is in the right place but the lack of understanding what made the first four films such a fun hit with movie fans is lacking. Can a good reboot be done, maybe, but the damage has been with these two latest efforts… What happens after this remains to be seen but I doubt we will see anything other than a minor budgeted unsuccessful sequel that has nothing to do with anything as I give this poor effort 1 star.