Thr33 Days Dead (DVD/SyFy Channel) – This feature was a product of a SyFy Channel reality show called “Town of the Living Dead”. I believe it was 12 half hour episodes of a film crew struggling for the past six years to make a zombie movie in Jasper, Alabama on no budget. If they finish it they get their film to premiere on SyFy Channel? Well, of course they finished it, problem is unless you were retarded like me and checked for the 1 am time it was listed you were not going to see the finished product. Good, bad, ugly idea… I was just glad SyFy threw the film on TV. But from what I have read it didn’t get good enough ratings to warrant a Saturday night time slot which kinda sucked. Personally, I hope someone takes notice of the idea not the movie? Great idea, poor execution of a movie… But anyhow without ranting on about this idea the six years in the making zombie movie suffers like most independent movies that go on way too long from no budget. It doesn’t hurt to think big when zombies are attacking a small town but if you don’t have the resources to pull it off you get this finished project. Three guys trying to survive a zombie apocalypse with impossible odds. I give it 1 ½ stars. 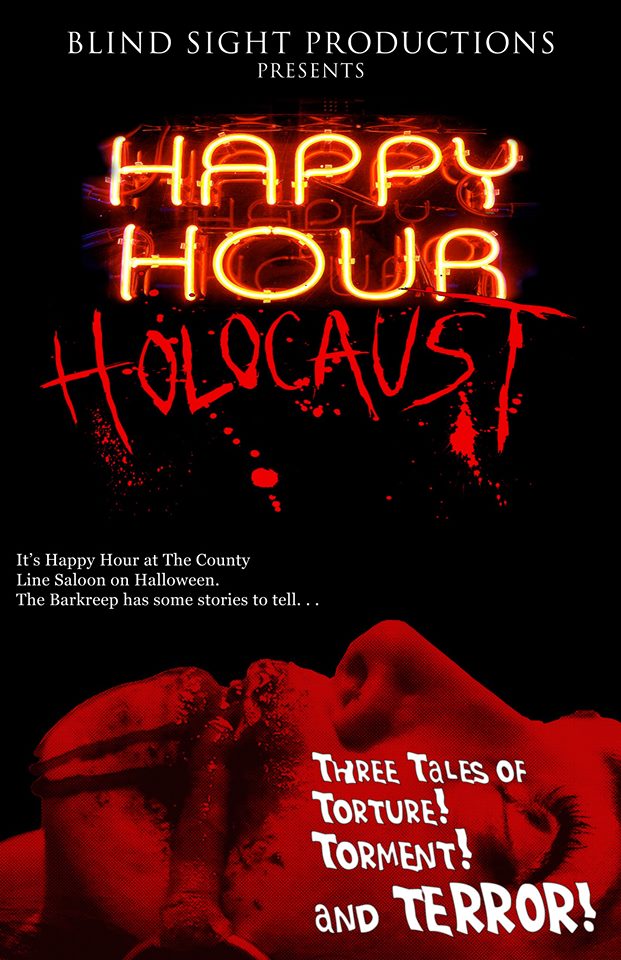 Happy Hour Holocaust (DVD) – A fun anthology film project directed and written by Jim Roberts and has help behind and in front of the camera from two other talented people in Tim Novotny and Jorge Delarosa. These three independent filmmakers finally have come together to start making projects and I FUCKING LOVE THE IDEA! These three guys have done impressive and different stuff the past couple years that have me absolutely salivating for what they do next…? But in the meantime we get this fun Indy project that taught me three things: 1) Crazy people should always get their meds, 2) don’t trust a cute girl that’s psycho, 3) and don’t trust an empty bar on Halloween night! Also there is way too much crotch mutilation in this flick so dudes prepare to cringe at least three times. Horror fans talk of Ty West, Eli Roth, etc., I say fuck that shit! These are the filmmakers to pay attention too: Jim Roberts, Tim Novotny, and Jorge Delarosa. Remember the names because they are the future of horror! I give the project 3 out of 4 stars.

The House That Dripped Blood (DVD) – A great and subtle flick about a house that has a past of people dying in it for various reasons. Not the best film starring these folks: Christopher Lee, Peter Cushing, Ingrid Pitt, and that dude from Indiana Jones but a great excuse to watch a cool British horror film from the early 70s. I give it 2 ½ stars.

Abraxas: The Guardian of the Universe (VHS) – Well if Jesse “The Body” Ventura is the guardian of the universe in 1990 I rather he pass onto another planet and let us die out because the movie should be arrested for viewer’s abuse! Leave it to me to find a horrible movie even by my standards starring Jesse Ventura. Jesse is a “Finder”, a peace officer in intergalactic terms. Well his partner has just determine he wants more power to rule the universe so he goes to earth impregnate some blonde bimbo that just happens to be Jim Belushi’s second wife so he can come back and rip a code out of the child’s brain! Five years go by after the incident and Jesse’s partner busts out of intergalactic prison to go find his non-verbal alien kid. I have more fun dealing with “Crown Royal” hangovers than watch this flick again. I give it 0 stars and thanks to Jesse for ruining the thought of him being anytime of actor.

Lifeform (VHS) – The movie is also known as “Invader” on DVD. The film is a pleasant surprise if you are a sci-fi/horror nerd. The mid-90s flick is about the Viking II satellite comes back to earth mysteriously after 15 years ago it being sent to Mars. Scientists get ahold of it to study it before the military is about take it away  but find it may have a stowaway. Is the alien life form there to kill or communicate? One thing is for sure we are not alone in the universe in this flick that sports some cool creature effects as I give it 2 ½ stars.

Mardi Gras for the Devil (VHS) – The early 90s film is also known as “Night Trap” on a very crappy DVD. We got a long-haired bad ass demon serial killer in Michael Ironside who is slashing his way through New Orleans. A detective in Robert Davi is trying to find a way to stop the supernatural killer as long as his boss played by John Amos doesn’t stop him. Boobs, blood, and Michael Ironside being Michael Ironside make this a must see feature as I give it 3 stars. 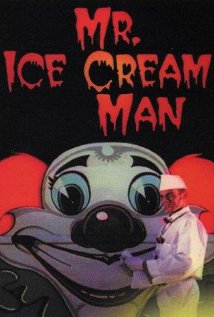 Mr. Ice Cream Man (VHS) – Don’t get me wrong I love SOV independent flicks they can be so much fun. This isn’t one of those times as I try to stay awake through this boring story of a man who kills and stores his victims on his ice cream truck. Sounds familiar? Yeah, do yourself a favor and stick with the Clint Howard classic. I give this flick a ½ star.

Season of the Witch (VHS) – A very trippy early 70s film that just happens to be George Romero’s third film and was also released under the title “Hungry Wives”. The movie is a product of its times and doesn’t hold up well but is a great story of a woman named Joan that is tired of her normal routine life of being Jack’s wife, a housewife. So she turns to witchcraft! Interesting and weird and for that I give it 2 stars.

Mutant World (DVD/SyFy Channel) – A great concept film that should have been so much more but fizzled is about a meteor about to hit Pennsylvania and cause an apocalypse. Doomsday preppers in Colorado hide in their bunker for ten years only to come out to be greeted by mutants who want to eat them. The film spends more time on the Doomsday preppers arguing than fleshing out the story about humans finding a way to survive ten years after the catastrophe. I give it 2 stars.

Late Phases (DVD) – A blind Vietnam vet is being moved into a senior community by his son only on his first to have his neighbor attacked by a werewolf. He soon finds out there has been a lot of dogs missing and attacks once a month in the community chalked up to wildlife since the gated community was built near some dense woods. The blind vet decides he has a month to prepare and figure out who is the werewolf and kill it and the movie fleshes it out brilliantly. Great flick, Tom Noonan as a priest, and Robert Kurtzman as creature effects supervisor, count me in on this being one of the best horror flicks of 2014 as I give 4 stars. 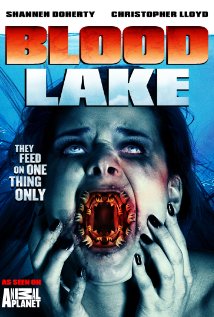 Blood Lake: Attack of the Killer Lampreys (DVD) – A horror film that premiered on Animal Planet of all places has found its way onto DVD for all of us ‘killer animal film’ lovers. The film is the latest project from filmmaker James Cullen Bressack who seems to be one busy dude these days. An officer from the Fish and Wildlife just happens to be spending the summer at a small town in Michigan where there are lampreys invading the fishing areas and it needs to be resolved. Christopher Lloyd stars as the mayor of the small town and wants it done in one day but doesn’t understand the lampreys are a much bigger problem than he realizes as people are being attacked and eaten in the lake, their home, out on the road. The lampreys multiply quickly and try to eat the town whole. The film also stars Shannon Doherty (who pops up in the weirdest of movies these days), Zack Ward, and Fred Stoller. And let’s not forget the lampreys face death by weedwacker!  It’s a hilarious killer animal movie that kept my interest as I give it 2 ½ out of 4 stars and can be found on amazon.com.

Hazard Jack (DVD) – An Afghan war vet is having trouble adjusting to society so he decides to set up shop in an abandon hospital to torture and kill people in to get his frustration out. He gets pissed when some college kids decide they want to play paintball in his home and they bring a pregnant woman with them. Which of course means for the integrity of the plot he cannot kill her that would be just wrong? There is lots of blood, sex, and useless plot but this film is exception to the rule of it equaling a great horror flick as it insults horror fans more than entertaining them as I give it 1 star.

Dig on the trailer here: https://www.youtube.com/watch?v=7RaX5UQKi68