Horror of Dracula (DVD) – One of the early Hammer films that made Hammer a household name in 1958. The classic starred Peter Cushing as Van Helsing and Christopher Lee as Dracula and became the magic formula that a generation of horror fans cherished. And still do. Up until this film people only knew of Universal Studios version of Dracula. The original film was good but was a little boring at times. This version took a little twist, added bright blood, and Cushing and Lee playing their roles to perfection made this film an absolute delight. Harker is sent to Count Dracula’s castle to see if the rumors are true and if so kill him. Harker fails but gets his diary out for Helsing to find and give him clues on what happened at the castle. Problem is Count Dracula now wants a new woman and heads out looking for Harker’s Lucy. No one believes Van Helsing about Count Dracula until he finds an undead Lucy trying to take a child to her crypt. This version of the Dracula films might be the first film I would introduce to a new fan of vampires. Don’t get me wrong Bela Lugosi was awesome but they upped the ante having Cushing and Lee at their peak. This film gets 4 stars all the way.

Halloween (Theater) – Remake, sequel, forgetting everything in the series? Take your pick as Blumhouse Productions goes the route of JJ Abrams “Star Trek” in bringing Michael Myers back for another installment. That’s the best way to describe it. But I will give you the long way about it also: Okay folks, first you are supposed to forget everything after the first film 40 years ago… Second, even though “Halloween II” took place the same night Halloween 1978, forget that too just in case. Third, no this isn’t a remake of “H20” even though there are a few scenes of déjà vu. Fourth, Laurie Strode and Michael Myers are not brother and sister which I believe they explain quickly and brilliantly during the film. Fifth, didn’t Laurie Strode die? Oh yeah, you were supposed to forget that too since you are not supposed to remember she died already in Part 8. Sixth, no Busta Rhymes and Michael died for good at the end of part 8 (if interested “Halloween: Resurrection”, remember don’t blame me). Seven, didn’t Rob Zombie start a new timeline? It’s very therapeutic for me to explain this.  Now with all that out of the way I absolutely fucking love this film. It felt like a part of the series part sequel/part renewing of original material. After The Babysitter Murders in 1978 Michael Myers was captured by the Haddonfield Police and Dr. Loomis. Since then Michael has been sitting in a maximum security asylum for the past 40 years and Laurie Strode has become a basket case doomsday prepper who suffers from surviving that night. A British podcast team comes asking questions on the 40th anniversary of the murders. Laurie is more concern as they are about to move Michael to a horribly tortuous secured facility where he will live out the rest of his life not saying a word. They show him the mask and it does get a reaction but still no words. It is believed that both Michael and Laurie only live to kill each other at this point? Of course Michael escapes and starts murdering spree going house to house until finding out where Laurie and her family is. This time Laurie is prepared! If you pay attention there is a lot of talk of Dr. Loomis, the school daze scene, Laurie Strode falling out the window and getting up, the people behind this really did their best to incorporate the first film. Including the opening credits! Simply it was nice to enjoy the series again without trying to reinvent the ‘Boogeyman’ as I give this 4 stars with a little hesitation for the mere reason I believe there is a couple different endings for this film and that MAKES ME INTRIGUED. 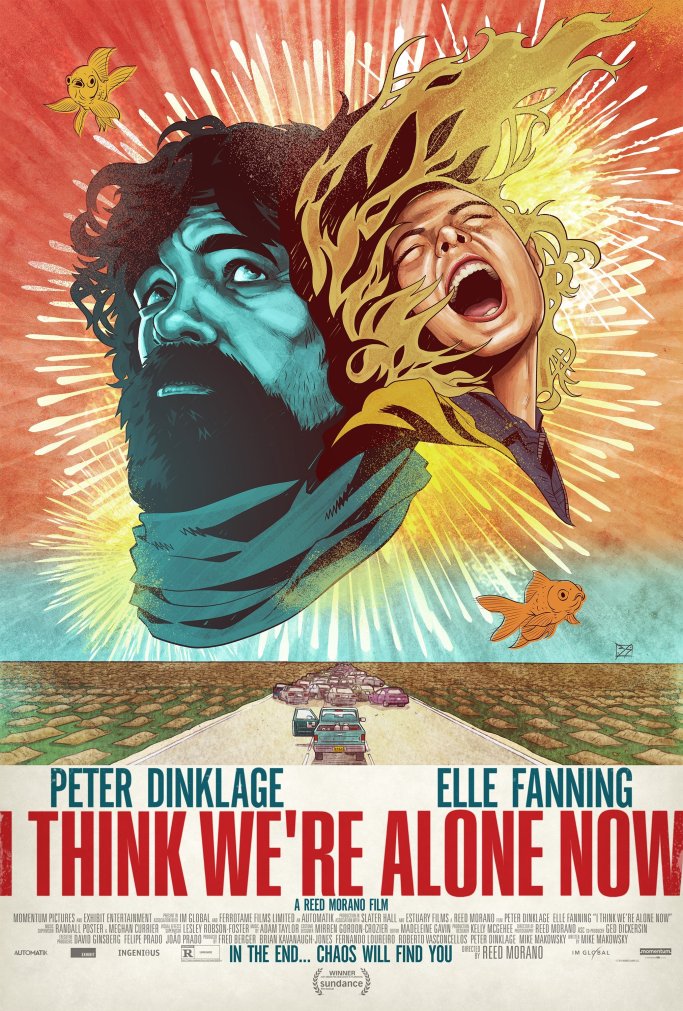 I Think We’re Alone Now (DVD) – A very interesting post-apocalyptic film that stars Peter Dinklage in a small town where a plague of sorts hit the world. He has been living there for some unknown amount of time cleaning out houses and burying the dead. Del catalogs everything and is at peace with the life of living alone. Then one evening fireworks go off and a car crash in town. Del gets up goes to investigate only to find a young lady with a gun and knocked out. Once awake he explains she should be on her way but Grace is looking for a home and just seeing the sights? The two get to know each other and Del accepts Grace’s presence into his peaceful world until it is shattered when he awakes and hears voices. He peaks downstairs only to meet her parents, sort of? As she asks for help from Del but refuses and leaves but he is told of a town that has gotten past the apocalypse and has returned to normal life again. It haunts him until he takes a drive looking for her. The film hints constantly at something more sinister is going on… This film gets 3 ½ stars from me as it comes up with a post-apocalyptic world that isn’t all about assless chaps, Eye-talians, zombies, and flesh eating viruses. This is something different that does not focus on the problem as just people existing and moving on.

Goosebumps 2: Haunted Halloween (Theater) – This story is somewhat separate from the first film but continues inside the Goosebumps universe. A couple of kids running an after school business called ‘The Junk Bros.’ are asked to clean out an old house where they find a trunk. The trunk holds an unpublished book from R.L. Stine/Jack Black called “Haunted Halloween”. Once they open it they unleash Slappy. Slappy is hell bent on making the book a reality and giving it the ending that has yet to be written? So on Halloween night Slappy and the Goosebumps got everybody running for their lives again as now Slappy wants his own mother. The kids are forced to not only save mom but defeat Slappy or it becomes ‘Haunted Halloween’ every day. The sequel introduces ‘The Haunted Mask’ and a few other Goosebumps characters we may have not seen in the first film but this one felt more like its own story. The first film felt more of an origin story to the “Goosebumps” story world. Of course it’s left open for a third but I will be surprised to see a third film unless it is “Horrorland” in theaters? The info that is circulating out there why this one took so long and why they didn’t have most of the main characters return from the first film was: conflicting schedules. Don’t worry Goosebumps fans the movie is still a lot of fun and might not have been the sequel I believe we all wanted… It is still very entertaining and gets 3 stars.

Lost Soul: The Doomed Journey of Richard Stanley’s Island of Dr. Moreau (Blu-ray) – An unbelievable documentary that dives right into the rumors and truth on what the hell really happened on the set of the remake of “Island of Dr. Moreau”. This is a subject if you were a horror fan, let me correct that a Richard Stanley you were nothing but excited for this project back in the mid-90s. “Hardware” and “Dust Devil” were amazing projects and breathed some much needed air into cinema. I believe the project was being remade for what the third time now but Stanley had some fresh ideas. But when the crew and Stanley started shooting that’s when all the weird stories began to happen, weird casting choices, Stanley being fired and disappearing, New Line Cinema wasting millions of dollars, etc. The stories seem to be urban myths as the internet wasn’t what we know it today. For the first time we get the whole story from everyone involved (mostly) and you decide: Richard Stanley completely crazy or just misunderstood and the project was forced to go down in flames from all involved? This is the type of documentary that gives you not only the inside look of how Hollywood people can lose their mind but how it can affect all involved. Great deep inside stuff on this disc and actually makes me want to revisit the remake just for the hell of it as I give the documentary 3 ½ stars.

Impulse (YouTube) – All you need to know folks is William Shatner as a very sleazy con man taking rich woman for their money! Hands down one entertaining mid-70s flick that I give 2 ½ sleazy Shatners. If you are a 70s film buff and haven’t seen this one? You will not be disappointed and thank YouTube for it. 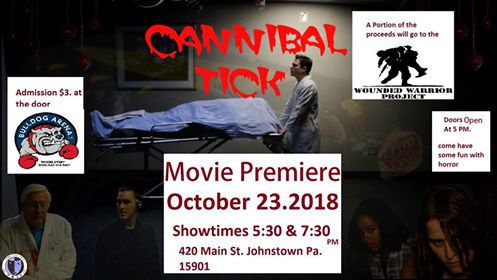 Cannibal Tick (DVD) – William Long’s latest independent project is feature length and deals with mutations. There is an experiment with ticks by a good doctor who has been modifying their genetics. Making the tick an unstoppable eating machine! The good doctor knows this is some bad stuff he is working with and knows it’s only a matter of time before something bad happens with lab protocols not being followed. Of course the assistant has stolen the samples and the new cannibal tick gets out destroying everything. Now containment is almost an abandoned idea. I enjoy Mr. Long’s vision of what he wants on film. He doesn’t have the budget or crew to pull it off but still has the passion to bring it to life and see what happens. It has a few sound and pacing issues but just like early Polonia Brothers S.O.V. films Mr. Long still makes an entertaining film for us independent movie buffs as I give it 2 ½ stars. Check out the Facebook page for more info: www.facebook.com/Cannibal-Tick-129223514362159 .

Happy Death Day (DVD) – I put this film off for a good long time because it was PG-13 and just thought it would be another commercialized throw away horror film? I WAS WRONG! I got interested after seeing the sequel trailer feeling it was time to sit down and give this a try. Blumhouse Productions apparently knows what they are doing. I now put them with A24 studios in that segment of my mind when I see the label their films are must-see. Anyway the film centers around a college girl named Tree who keeps living her birthday over and over as she is killed during the day at some point. Think “Groundhog Day” the horror movie version. After several times of this happening she decides to use the day to investigate who is actually trying to kill her and see if she can stop it from happening. If she does she gets to live to see tomorrow. Simple horror movie but with great casting, characters you actually care about, and a horror that has no business being this damn good. Sometimes we or just I can drudge through some bad, boring, and downright worthless horror films but a gem like this is why I love horror movies. I give this wonderful horror film not meant for me and my age 3 ½ stars.