Happy Hour Holocaust 2: The Second Round (DVD) – One of my favorite independent filmmakers ‘Jim Roberts’ is back at it again with his crew. They recently finished up a sequel to their fun anthology film they released a couple years back. I have had this film sitting in my possession for almost two months. Jim wanted me to hold off because he had a little bit more editing left but I could not wait any longer as I am a huge fan of his work. And his crew that consists of his family and Jorge Delarosa are some of the coolest down to earth talented people you could ever meet. This new anthology of course expands the role of the bartender who does the wrap around story along with one of the best made movie openings I have ever witnessed. Great stuff guys! Wonderful music and effects blended together to set the mood of this independent feature. Our bartender has another three stories to tell: first was a reality show of drunken house flippers and what’s in the basement? Second is about mom and two brothers who have to take care of her. (Reviewed this short while back) Third is about a lonely dude out in the woods that seeks revenge for his dog. As usual Jim and family put together a tightly knit cast and film with some of the best special-effects you will see in an independent film on the east coast! A well-executed follow up film for the family as they never disappoint as I give it 3 ½ out of 4 stars. For more info on the film or Jim: https://www.facebook.com/profile.php?id=100004080845938 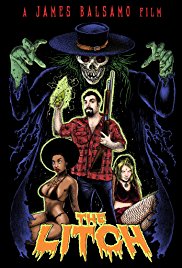 The Litch (DVD) – A hilarious film from independent filmmaker James Balsamo about a character named Vinnie who tells the story of accidentally awaken an undead demon wizard thing! James uses his talent to bring in some great cameo appearances to move the story along and keep it loose. Two of the cameos include Jeff Burr, Tom Sizemore and Elizabeth Daily. (Ms. Daily is a fave of mine just because of her work in the 80s.) Vinnie awakens the undead wizard thingy when he steals an expensive crystal from a crystal store. And according to Vinnie “that was the worst idea ever.” When he does it sets in motion events of “The Litch” possessing people in Vinnie’s life and their goal is to retrieve the crystal. If this happens “The Litch” is able to be THE RULER OF THE FOUR WORLDS! “The Litch” needs an army as he feeds on their souls. The film about a bumbling criminal and undead demon thingy is absolutely well-constructed, hilarious, and can see this having a few sequels in the future? And if anything else James did make sure you get to see lots of boobs. For that I give it 3 out of 4 stars and for more info on the film: http://www.acidbathproductions.com/ 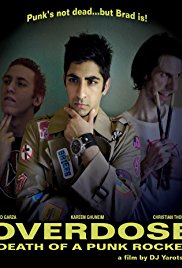 Overdose: Death of a Punk Rocker (Blu-ray) – When looking at this movie the first thing that catches my eye is the tagline: “Punk’s not dead… But Brad is!” okay I am in. Brad Stanley is the lead singer of a band called ‘B-movie Nightmares’. His former band mate and best friend Brian is watching the news and sees this report of Brad dying of a heroin overdose. Brian at first in shock refuses to accept this fate. But thinks about it calmly and decides to go down the rabbit hole of finding out the real truth of Brad’s death because Brian refuses to believe there wasn’t something or somebody behind his death. This rabbit hole gives us hilarious stories of when ‘B-movie Nightmares’ were together, lots of dialogue on Brad wanting to join the “27 club” of famous people, music industry conspiracies, and why Brian quit the band. If you are a Kevin Smith fan you enjoy this entertaining dialogue driven film. By no means this is a horror movie but that doesn’t mean you cannot take a chance on watching a film from filmmaker D.J. Yarotsky and enjoying something pretty fucking interesting with great music. I give it 3 out of 4 stars and for more info: https://www.facebook.com/overdosefilm/ 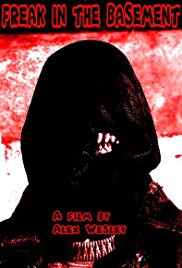 Freak in the Basement (DVD) – Another gory flick from Alex Wesley and Russia has made its way to me again where this film was a few years in the making. We meet a man named Nicholai. Nicholai visits a therapist to help him with his serious problem. Needs help, he needs someone to listen; he needs to stop killing people! But Nicholai begins to tell the story to the therapist of the monster in his basement. He comes in contact with creature after he tries to evict a tenant. The tenant is high or delusional but she wipes some weird stuff on his lips and Nicholai feels a high like no other before. Quickly becoming addicted to it and the creature possibly having telekinetic powers with him, he understands that the creature eats human flesh it secretes this snotty liquid/sweat which gets you high. This high cause Nicholai to go on a killing spree and then the movie gets real weird when the alien cyborg arrives to retrieve the creature to be a slave on another planet? Yes people I cannot make this entertaining shit up and love it when I see it on screen. Just when you think you have seen it all, you haven’t thanks to Alex Wesley and his independent filmmaking crew! I give this fun adventure into gore 3 out of 4 stars and for more info: https://www.facebook.com/groups/837731036372859/about/ and https://www.facebook.com/ShansHorrorFilms/

Swingers Massacre (VHS/YouTube) – The 1974 thriller is also known as “Inside Amy” for 70s film buffs. This cautionary tale of being into the “swinging” is about a lawyer who has been married for several years to a beautiful woman named Amy who is just happy with everything. But after Charlie hears a story about the lifestyle from one of his divorcee clients he is hell bent on trying this out with Amy whether she is into or not. Out of just wanting to please Charlie and his limp old wiener Amy goes along with the idea of going to a hip swingers club where they meet a few couples. One thing leads to another at a party afterward and Amy just happens to be the life of the party as males and female partners want “Inside Amy”. (Ha, ha, I couldn’t help myself as I wanted to laugh while writing this) Anyway Amy has a wonderful time and Charlie not so much. When they are calling back for the couple to come back for more parties Charlie’s reaction is “No!” and go on a killing spree of those who have and still want to bang Amy. A wonderful 70s film that I was unaware of and glad I now own a copy as I will be revisiting this again soon as I give it 3 stars.

Hell Spa (DVD) – A horrible but hilarious fun bad film to watch with friends is about Benson’s Health Spa which is closing due to all the new spiffy workout clubs that have sprung up. The failed business is closing its doors until a mysterious man named Mr. Ex comes by and offers her a one-time deal she cannot refuse. A few days later Benson’s Health Spa is up and running and looks better than it ever did. They even run a commercial saying “Look Beautiful and Stay Fit or Never Pay a Dime”. But things are not always what they seem as a local college paper investigates the resurgence in Benson’s Health Spa and their promotion. Plus they want to know more about the bad-looking 80s TV villain Mr. Ex and what’s his involvement since the new health spa is in every aspect of your life once you join with the new lifetime membership. But don’t worry folks this film doesn’t disappoint being the next film you need to own in your “bad movie collection” when a floppy disk saves all! Remember people film was made in 1990 and released in 1992 as I give it 1 ½ stars.

Death Wish (On Demand) – Finally the Eli Roth remake has made its way out there for all of us to witness, tear apart, or just complain it doesn’t have Chuck Bronson. In the times we live in the film has a whole entire different feel to it than the original from the early 70s. I believe that actually helps this film work as Mr. Kersey is played by Bruce Willis and is a doctor from Chicago in this film. When Kersey is called into surgery on his birthday, his wife and daughter get attacked in their home. His wife dies and daughter critically injured, Kersey is distraught with the lack of findings from the police. So just like the original Kersey takes it upon himself to track down the men that wronged his family. The movie isn’t going to make anyone’s best films of the year list but is too easy of a target for society to point too for several reasons. Instead I look at like this: This remake doesn’t bother me at all as it has a complete different feel to it just because what is happening in real life these days and I really didn’t feel anything for any of the characters. I believe Eli Roth did what he could with what was there as I give it 2 ½ stars.

Dude Bro Party Massacre 3 (DVD) – Thanks to “5 Second Films” and crowd funding this movie exists as it doesn’t just make fun of the slasher genre as much as points out the some funnier aspects of the lesser known slasher flicks. Plus they wanted to break the record for most kills on film. Brock belongs to a frat who has survived two massacres of a killer named “Motherface”. But he dies when seeing a therapist to talk about what happened. So his twin less appealing brother Brett sets off to pledge for the same frat and find out what really happened to his brother and find his killer. But the frat brothers are not sure to accept Brett or not as they go off to the cabin in the woods for the weekend where they killed the whole town with a flood. Once there the Motherface is back and slicing and dicing her way through the frat brothers in hopes of killing them off completely. And it is possible that Ronald Reagan is behind everything? Hilarious, check your brain at the door horror film that yeah most likely goes a few minutes longer than it should have. But still worth the watch as I give it 3 stars.