Grotesque (VHS/YouTube) – A late 80s Linda Blair film that seems like two films smashed into one. It’s no ‘Spookies’ but what movie is? Linda Blair plays a character that goes to visit her parents along with her best friend for the weekend. The quiet weekend takes a turn for the worse when a group of punks (pay attention as Robert Z’Dar is one of them) come by and brutally start killing all in the house. Blair escapes into the snowy mountain landscape as she is chased after by the punks. But this movie takes an odd turn where a thing has been watching from afar and now is killing the punks one by one eventually helping out Blair. But she falls into a coma and this large disfigured man who was saving her is shot down by police. The last two punks get off with the lack of evidence but the Linda’s uncle has some other plans as he knew about this disfigured person that hid in the cabin for years. The film takes a couple odd twists and seems like it ends two or three times. Not the best of the Linda Blair resume but a definite interesting one as I give it 2 ½ stars.

Silent Assassins (VHS/YouTube) – Sam “Flash Gordon” Jones is a detective whose girlfriend is Linda Blair who convinces him it’s time to move to quiet Colorado. But Sam’s old boss gets his attention with a case of a six year old kidnapped by a psycho drug dealer who has also kidnapped a bio-chemist! One boring thing leads to another as question what is Linda Blair’s role in this lackluster action flick? The film also stars action stars Phillip Rhee and Mako but that isn’t enough to save the film as I give it 2 stars. 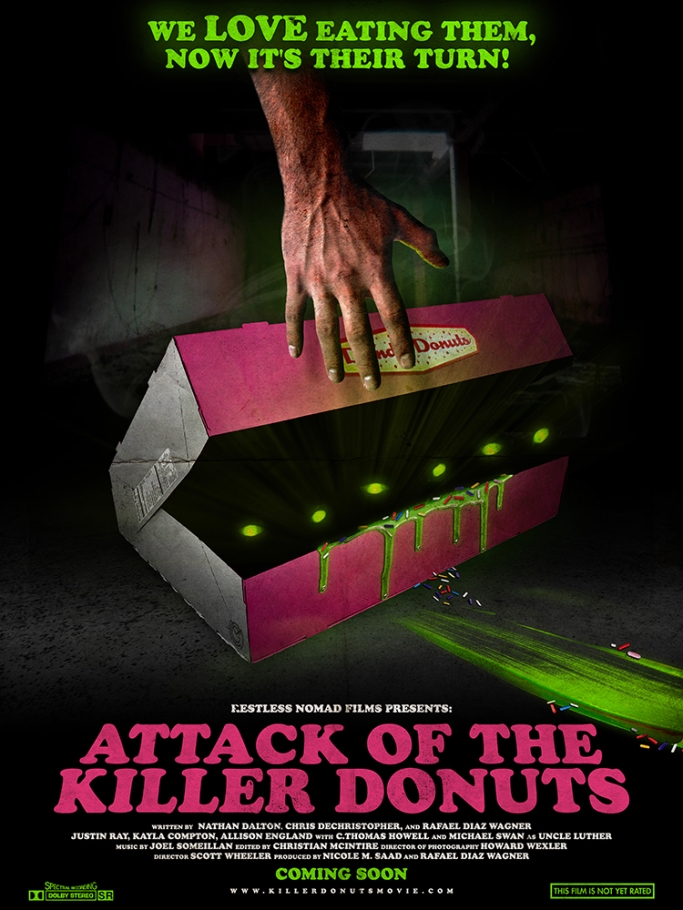 Attack of the Killer Donuts (DVD) – To put it simply it is the new version of ‘Attack of the Killer Tomatoes’ and there isn’t anything wrong with that folks. Michelle and Johnny work at a donut shop called “Dandy Donuts”. Pretty much Michelle and Johnny are the only two employees who are willing to put up with the public and the shitty boss. Meanwhile Johnny’s Uncle Luther is a mad scientist who has developed a breakthrough serum that turns a mouse into a man-eating rat. Luther comes to Dandy Donuts looking for Johnny and accidentally gets some of the serum into the deep fryer… Presto, changeo! We got killer donuts! The little doughy bastards now have teeth and they are pissed humans have been eating them for years. So the donuts go on an eating spree whether it’s the lonely fat lady in lingerie or C. Thomas Howell as a police officer the donuts are eating through everyone. The only people that can stop these bastards is love sick friends Michelle and Johnny and Johnny’s best friend who is banging Johnny’s mom. So okay maybe it is ‘Attack of the Killer Tomatoes’ with ‘Gingerdead Man’ added into the mix but it’s one fucking hilarious horror movie that you will not want to miss in 2017! My only problem with the whole film is the ending that never ends as of course Michelle and Johnny end up together but the bedroom scene goes on way too long like its padding out running time or something? Outside of that I absolutely love this flick and the poster fucking rocks as I give this beautiful horror film 3 ½ stars. Still on the fence if this makes my “Best of 2017 list”?

The Magnificent Seven (DVD/remake) – Denzell wouldn’t have been my first choice for the remake but he proved me wrong. Yeah I know this is a remake of a remake but this western just seemed less worried about what had already been done and more worried with just putting together a decent film. Good or bad it entertained me… But anyway Denzell is a man who puts together seven men to take on an overbearing son of a bitch and his army who have taken over a small mining and farming town. Yeah there is better westerns in the past but these days it is just nice to see a new western that is worth your time watching as I give it 2 ½ stars. 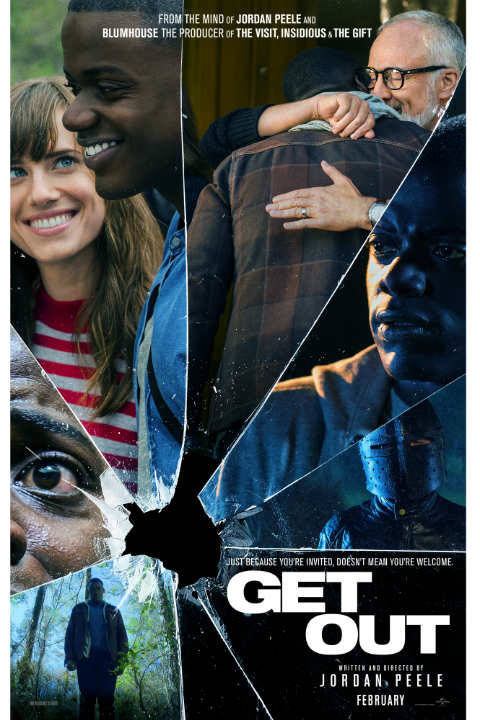 Get Out (On Demand) – Well this flick lived up to its hype and don’t trust those rich white people! The film is written, directed, and produced by Jordan Peele who takes a simple concept and turns it into a great fucked up movie. And I love all the social awkwardness placed into the scenes. But the simple horror film is about Chris, a young black man going with his white girlfriend to her parents’ house to meet them. The parents a little off and try a little too hard to make Chris comfortable but are or seem to be normal rich white folks. But for Chris something always seems a little off or not right? One night Chris takes a walk outside to smoke and run into the girlfriend’s mom who hypnotizes Chris to stop smoking. It works but things still seem weird as Chris’s brother agrees also believing his brother is going to be a sex slave or some shit too these rich white people? From there the film gets a little weirder as Chris finds himself questioning all the white folk that come for the party and the things he sees… And if there is another thing you take away from the film: “Don’t trust rich skinny girls”, they are fucked up. A very simple but effective horror film that is clearly one of the best of 2017 as I give it 4 stars.

Star Crystal (VHS/YouTube) – During a routine Mars expedition in 2032 astronauts bring aboard a rock on their ship that causes the ship to malfunction and kill all aboard. Two months later the ship and rock is found and the company that owns the ship wants to know what happened? But it happens again and some people escape and the rock hatches with some ugly slime monster that kills people on board of the spacecraft. As they make their long journey back to earth and try not to be eaten the creature wants to learn and become friends with the crew because it didn’t know killing was bad? Imagine if you could make a boring version of William Malone’s ‘Creature’ on even less of a shoestring budget as everything throughout the film is so generic. Sometimes boring and not sure why I was laughing at most of the film but this 1986 film suffers from “the box art is better than the film” as I give it 1 star.

Clowntown (DVD) – Based on true events of course some friends going to a country music concert get sidetrack when one of them forget their phone in the diner. She gets a phone call and they are to meet in the small town ahead of them to retrieve the phone. But they get there and the town is all but a ghost town and apparently serial killer clowns live there. Plus the cops let them do their business as long as the clowns don’t kill the pretty girls so they can be raped. The horror movie suffers from trying to cash in on Rob Zombie’s film and trying way to hard making the clowns scary. I liked some the effects so I give the horror flick 2 stars.

Bus Driver (DVD) – Young bootleg Robert Forester meet the real Robert Forester as the bootleg version just wants to be a bus driver. But when his bus has a tire blowout and they knock on the nearest meth-lab house he must bust out his special forces training to kick some drug dealer ass. A low budget flick going the “Grindhouse” route of putting together the story of a bus driver just trying to protect his kids. Maybe a little stupid but entertaining enough for me to say bootleg version isn’t better than the real Robert Forester from ‘Alligator’. Give the film 2 stars for at least trying the concept out.

Death Race 2050 (DVD/remake) – Roger Corman and crew got behind this god awful abomination that has Malcolm McDowell and Yancy Butler collecting paychecks for possibly the worst film of 2017. This movie is so bad I am rethinking my stance on the Jason Statham remake and sequels that have absolutely nothing to do with the original masterpiece starring David Carradine. That is some major shit people as I have made it known I hated the idea of the Jason Statham flick. But this film is something of a shit show literally. This movie is crap so I give it crap as people who thought this would be a good idea should not be allowed to have anything to do with film ever again! Corman and crew you should have left it at ‘Deathsport’?

Yes, Madam (DVD) – Michelle Yeoh and Cynthia Rothrock are two detectives who kick some major ass looking for this microfilm that could put a bad guy away for life. If that isn’t enough of a combo how about some of John Carpenter’s “Halloween” soundtrack used throughout the film? I give this ass kicking woman duo film 3 stars.

Extraterrestrial (Blu-ray) – Some college kids go to the cabin for the weekend as some weird X-files shit has been happening in a nearby town. That night after arriving at the cabin a spacecraft becomes a fireball and falls from the sky. The kids go check it out only to notice weird little footsteps leading away from the craft. They grab the double barreled shotgun for defense and shot an alien at their back door. They believe it is dead but its friends are pissed and looking for revenge as a crazy old Vietnam vet Michael Ironside cannot save them. I enjoyed the ending of this flick also as it did not pussy out like some flicks do when dealing with this genre aka happy endings. If you are a fan of films such as X-files, Almost Human, and Fire in the Sky this will fill your appetite for alien flicks as I give it 2 ½ stars.

Survival Zone (VHS/YouTube) – A South African 1983 flick that deals with the neutron bomb going off and killing most of the world. All is left is pockets of people in these survival zones. Or cannibal motorcycle gangs that are roaming the wastelands to kill farmers and eat nuns! Sounds better than it is but bootleg George Eastman is leader of the cannibal motorcycle gang that wants everything and goes to war with a farmer to have his 17 year old daughter. I give the post-apocalyptic film 1 star.