Sledgehammer (DVD/YouTube) – No, this isn’t a remake of the 80s S.O.V. flick we remember so fondly. And no the filmmaker Joshua Miller isn’t the former punter of the Pittsburgh Steelers. With that out of the way it is a film about a young man Yolner who is having a bad day. His girlfriend broke up with him, his car broke down, he is threaten to be fired, and on top of that his co-workers pull a prank on him by putting shrooms in his coffee. Yolner loses mind and goes on a psycho rampage killing his co-workers, random people, all in the search for his former girlfriend. He is nicknamed the “Sledgehammer Killer” by the press as he continues his rampage through the city! Watching this I thought I was going to get this cool ‘Jackhammer Massacre’ type of flick? Oh, I was so wrong and wanted to turn this flick off 25 minutes in as it was so terrible. Instead of shorten up the flick and adding blood and guts for fun we get what resembles a horrible music video flashback from the early 90s? Beyond words how terrible this film is, but I got through it and hopes of you not making the mistake I did as I give it 0 out of 4 stars. If curious, stupid, or just like to be abused you can get it through www.braindamagefilms.com .

Peelers (DVD/Vimeo) – A small town strip club owned by a pretty lady named Blue Jean is having the typical rough night she is used too. What is different about this night is Blue Jean has sold the place and has plans to ride off in the sunset on her bad ass cop motorcycle. Things change when some workers from the local mine roll in with oil and dirt all over them wanting booze and naked ladies. When one of the guys feel sick and run to the restroom the fun begins as he pukes up all of his bloody fluids and becomes “a crazed, brutal, brainless killer”! To make it even more interesting it is up to Blue Jean, her pseudo-son, and the bouncer to protect the strippers until they find out the crazy fucked up dudes and is killed with water. Fuck yeah people, ‘Neon Maniacs’ we are talking here people. A surprisingly entertaining flick that is a blend of ‘Feast’ meets ‘Zombie Strippers’ with a tanker full of blood and guts. My only big beef with the flick is the strip dances could have been edited down some. It’s a strip club; we know we are seeing some tits at some point. You do not have to establish every stripper and the dance they do that is called porn. With that aside this pleasant horror surprise is worth seeking out as I give it 2 ½ out 4 stars and can be found at www.facebook.com/octobercoast . 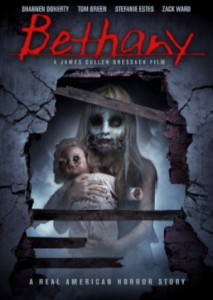 Bethany (DVD/Vimeo) – Apparently James Cullen Bressack is able to poop out movies at will as his latest is a thriller is about a woman whose past comes back to haunt her when her mother dies. When Claire was a kid she did not have any friends and her mother made sure she was in every beauty pageant there was. So Claire begins to talk to her imaginary friend Bethany in the wall of her bedroom. This all flashes back to Claire as she talks to her husband as they plan to stay in her departed mother’s house. Claire wants a family but has had issues since their first try was stillborn and Claire lost her marbles. The longer Claire stays in the house the more odd things happen including Claire speaking to Bethany again. The film gets pretty creepy as secrets are revealed and the film isn’t your typical ‘Paranormal Activity’ cookie cutout bullshit. The film sports a pretty nasty fingernail scene and a serious Tom Green as Claire’s therapist that makes you cringe with joy. I enjoyed the fresh twist with the Bethany character and for that I give this flick 3 out of 4 stars. You can find out more at www.facebook.com/octobercoast .

Psychos (DVD/Vimeo) – Three young women get a disturbing text that shows them in very embarrassing and awkward videos from ten years ago. So J.J., Sasha, and Norma set out to find this house that is from their nightmares to steal the DVDs so these videos cannot be posted or texted again. Once there things get stranger as the three women are separate personalities of a young woman who is having recurring nightmares of all the sexual abuse she encountered from these two old pervs that live a normal life! Bloody, creepy, and a little weird makes ‘Psychos’ an interesting watch as I give it 2 ½ out of 4 stars and more can be found out at www.facebook.com/octobercoast .

Deviant Behavior (DVD/Vimeo) – Here is a good slow burn kinda of thriller for you from a filmmaker Jacob Grim. A lonely private investigator named Chuck is hired to find a girl that the cops seem to be dragging their feet on. Chuck hits up the usuals: hookers and bums for information. But that goes a little dry until he is visited by an old colleague from the force who tells Chuck it is being covered up. Once Chuck puts a few things together and has a suspect he regrets stumbling into something he never could imagine as two twisted serial killers are the cause for disappearances of the girl he is looking for but many more also. Lots of gore, characters you care about and creepy/fucked up killers make this slow burn type of film make this an interesting watch for horror fans! The film reminds me somewhat of a cool much unknown Christopher Lambert flick ‘Resurrection’. Has that weird fun thriller feel? I give the flick 3 out of 4 stars and more about it can be found at www.stxmedia.net/deviant-behavior-movie .

Don’t Kill It (On Demand) – Mike Mendez and Dolph Lundgren together for a supernatural horror film equals horror GOLD! Dolph Lundgren aka Mr. Woodley the Demon Hunter rolls into a small Mississippi town looking for a demon that have cause a triple homicide three times in one week. We learn the demon cannot be killed as if you kill the person it possesses you become possessed. So this mucks things up as Mr. Woodley must be able to capture the demon by committing suicide. Mr. Woodley comes from a family of demon hunters who have done this for years and he has been trying to figure out what he can do with this demon so no one can let it loose again. Woodley has trouble trying to explain to the small town folk that you just can’t going blasting it away which leads into an awesome bloodbath at “Town Hall” that will make horror fans drool! Congrats Mr. Mendez and Dolph your film will most likely make my best of 2017 movie list as I give this bad ass horror film 4 stars! It is like someone gave the TV show ‘Supernatural’ Grade A steroids and Dolph Lundgren.

The Hunters of the Golden Cobra (DVD/YouTube) – I fell down the worm hole again of cinema in the Philippines in the early 80s. This time around I find this flick that stars David Warbeck in some kind of action/adventure flick that takes place in the 40s. A couple governments get together to hire a British agent and his buddy to find the “Golden Cobra”. This precious artifact will somehow restore order? So off to the jungles where a lost white woman controls the natives and her twin sister tries to screw everybody over for the precious artifact. Pretty corny and fun crap to watch if you are on the lookout for something different as I give it 2 stars.

The Beast in the Cave (You Tube) – The latest short film from filmmaker Cameron Mccasland tackles a short story from H. P. Lovecraft. A man writes down what exactly happened to him when he strays away from his tour guide in a cave. Fun Lovecraft stuff for the fans as I give it 3 out of 4 stars.

Taught in Cold Blood (DVD/Vimeo) – High School student Cameron is a lonely teenager struggling to get through his day. No dad, no mom (she is mostly a passed out drunk when not yelling at Cameron), and no friends. Even though a pretty girl named Amy tries to make herself known to Cameron he still believes he is alone. That is until Cameron by accident follows a bloody man into the woods only to watch him die at the hands of another man named Tony. After helping Tony dispose of the body, Cameron becomes obsessed with Tony and his killing ways. Cameron returns Tony’s wallet and begins to question Tony everything about murdering someone. While this goes on for days and days Cameron and Amy finally talk after Cameron saves her brother from two bullies. Cameron soon finds himself being pulled in two different directions but soon it becomes very serious when Tony is now obsessed with Cameron and stalks him. Cameron must choose: pretty girl or being a supreme serial killer? A well written thriller that has you invested in the characters and keeps you at the edge of your seat in what Cameron believes he should do… I give the flick 3 out of 4 stars and it can be found at www.continuummotionpictures.com and www.mctvnetwork.com .