Deep Blue Sea 2 (On Demand/DVD) – So this was a glorious waste of a sequel. Some rich dude basically buys the same set from the first film and sets up sharks to experiment on. He of course brings in the smartest people from around the world to work on his project that could possibly unlock the human brain or extend life… Or just make bull sharks smarter and wanna fuck up humans for fun! Eventually after they breed they become “piranha-sharks” that SyFy Channel has made better with less. This was a sad excuse for a sequel and should be avoided as it is the worst movie so far for me in 2018 as I give it 0 stars.

The Night Watchmen (DVD) – So Blimpo the Clown, a Baltimore native, has died in Romania while on tour. His body is shipped to the Baltimore Gazette instead of the morgue down the street. The night watchmen are made a deal by the two guys who made the mistake to keep it overnight. We are introduced to two crazy watchmen who for the most part just watch porn and play cards, while a third that might be witness protection reads a lot, and the new guy who is done with the band thing. Everything that happens at the gazette is known by these guys: missing lunches, cute girls on which floor, when the boss (James Remar) is feeling up young ladies’ butts. Well their boss gets curious about Blimpo’s coffin to see if he can steal anything but instead finds Blimpo the Vampire! Blimpo and his fellow going army of vampires have taken over the building and Karen the cute journalist is in trouble. So the night watchmen and the rookie come up with a plan to save her and possibly ask her on a date while fighting vampires. We get a hilarious, awesome glorious bloody mess of a horror film that will be on my ‘Best of 2018’ list. I give this movie 4 stars folks.

AZF (Anti-Zombie Force) (DVD) – A zombie outbreak has ravaged the world and the military is growing thin trying to save folks. But there is new hope as news comes across a radio transmission of a cure called “Code Lazarus”. Along with hope of course come people who want the cure to just rule the world instead of restoring it? The movie centers on these two military groups racing to get control of the cure. The props, military truck, guns make this independent zombie film an interesting watch. The story isn’t exactly something that is unique but having the resources on a small budget to pull off what most have trouble doing is gratifying enough for me to enjoy what this filmmaker and company pulled off. For that I have to give this feature some respect and 2 ½ out of 4 stars. More about the film can be found at www.witchdoctorfilms.com . 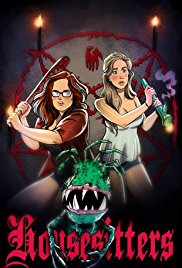 Housesitters (Vimeo/DVD) – An independent horror/comedy that has young two girls: Angie and Izzy getting the perfect job of housesitting for a guy that Angie met the night before. Plus the house has everything including a Platinum card to order anything and the satanic pentagram with candles in the basement. But the young ladies still have free reign of the house. This includes smoking lots of weed, watching a crazy amount of porn with the pizza guy, and hanging with their guys until a little demonic creature shows up and kills them in their bathroom. Once they understand they cannot leave the house as there seems to be a void outside of it they find a spell book. They also find a note inside explaining they are part of a demonic ritual to bring forth a demon god. The two decide to confront it in the basement with surprising results. Jason Coffman put together one amazing film as it made me laugh out loud six or seven times. The Indy flick isn’t just entertaining but gives you something unexpected and funny. I love this kind of stuff and kudos to Jason and company as I give this flick 3 ½ out of 4 stars. You can find out more about the film at www.facebook.com/Housesittermovie or www.housesittersmovie.com .

Even Hitler Had a Girlfriend (DVD) – Folks by far this movie is bad but the dialogue is absolutely entertaining and making this worth forcing yourself through. A lonely dude named Marcus is a security guard who has a lot of time on his hands. Marcus has trouble getting dates so he turns to cable porn until his father shows up on the TV and starts talking to him. So Marcus decides it’s time to call the hookers and negotiate terms. Of course like any lonely dude he wants to remember the occasion so he tape records the first session and video tapes the others. Marcus bleeds his savings to pay for all the hookers in a mere couple weeks. Lots of topless women and hilarious dialogue are the highlights of this bad but very entertaining movie. This movie doesn’t need to be watched but witnessed as I could see the MST3K guys bringing this film up every week for the next episode. So thank you filmmaker Ronnie Cramer for this gem as I give it 2 stars.

Trancers VI (DVD) – So I totally blanked this flick out of my mind when it was first released in the early 2000s. Mainly because no Jack Deth aka Tim Thomerson. Tim Thomerson is in the film but only clips from the other “Trancers” films. Anyway Jack has to go back down the line to ‘Old L.A. 2022’ because his daughter is in trouble. Someway, somehow Trancers are back. Jack believed he was retired, that he killed the last of them. After a meteor shower Jack’s daughter Jo gets mixed up with Trancers after she believes the meteor shower is being covered up. Her ex-boss and his assistant have found a meteor rock and using it to turn the young homeless of L.A. into Trancers they can control. The film has its heart in the right place but I doubt Charlie had much involvement or cared what was going on with this sequel? The effects were terrible and you could see there wasn’t much budget to work with but glad I gave it another chance. This sequel does raise questions such as why hasn’t there been a reboot or another sequel from Mr. Band and company because this series does have its own fan base? Unlike the idiotic “Evil Bong” commercials he calls movies. And you can’t tell me Tim Thomerson wouldn’t be up for one more as he did reprise the character for 30 seconds in one of the “Evil Bong” movies… I have several more questions I could ask about why Full Moon isn’t doing anything with this series but again the film’s heart was in the right place just poorly executed as I give it 1 ½ stars.

Mayday (DVD/Vimeo) – An interesting thriller about your typical airplane trip from L.A. to London that isn’t so typical once leaving the ground. All is well on Falcon Flight 88 until the lights begin to flicker, and then go out, and then a passenger disappears. Of course this makes everyone on board scared for their lives as they do not understand what actually happened. Air marshal Anderson (Michael Pare) takes action as this is his job. But after talking to the frantic wife about her husband disappearing he is just as baffled as anyone else on board. Lights flicker again and another passenger disappears. Then it happens again. Anderson struggling for answers begins to entertain the talk of the supernatural after a conversation with a nice lady on board that he is kind of sweet on. Is it supernatural forces at work or is it something else going on that cannot be explained? All Anderson knows with the pilot just disappearing anything can happen unless he solves the mystery or he will be the one trying to land the plane. Filmmaker Massimiliano Cerchi crafts an interesting story that makes your mind think when all the characters are introduced. The film is a different and wonderful thrill ride that stars one of my favorite actors Michael Pare who is all in with his role as the air marshal. Fun stuff here folks from Mr. Cerchi as I give it 3 out of 4 stars.