Sneak preview of the upcoming SEVERE INJURIES blu-ray 2-disk set we hope to have out in October! Designed by Matt Gilligan and given a new coat of paint by Ryan Hose.

Unavailable for years, semi-remastered for blu, SEVERE INJURIES tells the story of Melvin Hubble, (Charlie Fleming), last in a long line of unsuccessful serial killers, making a final stab at glory by sneaking into the Rho Rho Rho sorority house, unaware that another killer lurks there too! (But no worries, this second killer is just as inept!)

Blu-Ray Disk will include Behind-the-Scenes, Outtakes, Interviews and Were-Grrl (including all the rare Were-Grrl extras that haven’t been seen since 2002!)

Bonus disk will contain a bunch of rare Happy Cloud shorts, including many that have never been on disk before. They include:

(Bonuse 16mm easter egg, “Whispered Verses” hidden somewhere on there due to a lack of music rights!)

Availability will be announced soon. 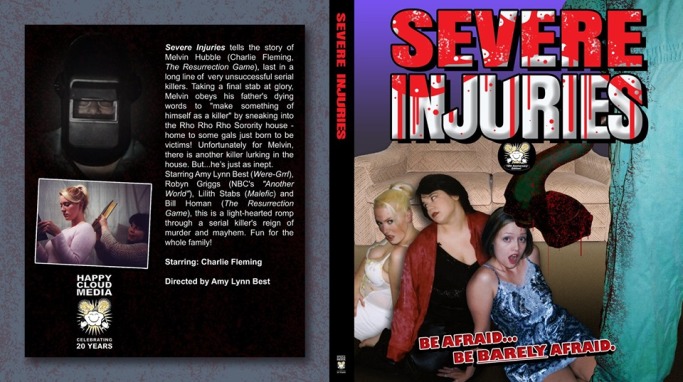