Once again he has been drinking and writing again!

Troma’s War (DVD) – A late 80s Troma film that I have always avoided for no good reason. I have always been told by a lot of Troma fans this might be their least favorite of the first generation of Troma films… That isn’t a bad thing, it’s not like the film exactly fits the mold of Troma at the time but who knows? A plane full of Tromaville people crashes somewhere in the area of the Caribbean Islands. Unsure exactly what happened or how survivors are scattered trying to figure out how to survive on the island. But bad news for the survivors as they explore because there is a group of renegade armed personnel preparing for war! The survivors must fight for their lives in order for survival and possible rescue. Overall the movie is a Troma flick but seems to be missing something but also it does run much longer than it needs too which can be bad for any movie as I give it 2 stars.

Turbulence 3: Heavy Metal (DVD) – Imagine a direct-to-video flick about an airplane hijacking that takes place during a death metal concert on board a plane. Sounds awesome but is completely disappointing as Rutger Hauer like everyone else shows up for their paycheck as a bootleg of a bootleg of a bootleg Marilyn Manson dude named Slade Craven goes all Steven Seagal on people. Including flying the fucking plane to safety! It begins with the F.B.I. tracking down a hacker who hacks into the concert footage. The agent goes rogue to arrest him until while doing that someone is murdered on the plane supposedly by Slade Craven? Then it turns into we are going to crash the plane into some small church in Kansas City that happens to be the ‘Gates of Hell’ to bring about Satan. Hate to tell you filmmakers even Satan is disappointed in your schlock you put on film and God isn’t thrilled either since I had to watch it as I give it crap! I love Rutger Hauer and this had a great cast but this film is a prime example of actors just doing a job for a paycheck or fulfilling a contract with a studio. 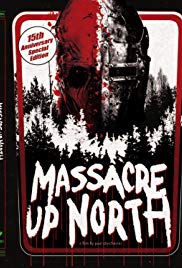 Massacre Up North (DVD) – A Canadian S.O.V. flick from 2001… Yes, I know they were still shooting on video in 2001 that is a whole other conversation. But anyhow the film opens with a couple rubbing privates together until someone in a medieval knight costume starts slicing and dicing them. This happens because 20 years ago a young kid is burned inside a tent during an innocent camping trip by his father accidentally. Upset with the world as Leslie goes through life with scars he kills his parents to make it look like an accident and sets up the rest of the film. Not totally sure where the knight costume fits into the Leslie’s murderous wrath but it is the climax of a movie that leaves you asking questions like: Why was I watching this again? I give the flick 1 ½ stars.

Past Midnight (DVD) – This little thriller starring Rutger Hauer, Clancy Brown, and Natasha Richardson is absolutely amazing treat from 1991. Ben Jordan has just got out of jail on parole after 15 years for killing his wife and unborn child at the time in 1975. Once out he must see his social worker Miss Mathews who believes he might be innocent so she begins to dig. She takes such an interest in the case it blurs her vision on what is actually right and wrong. This allows the story to linger and keep the viewer guessing until the last four minutes of the film of wandering if Ben is the actual killer. A fun first viewing of this Rutger Hauer film that will now go into my regular rotation as I give it 3 stars.

MIB International (Theater) – So they made another film trying to branch out without having Will Smith or anybody else that was connected to the originals. This takes place over in the U.K. (again that is why it’s called International… I guess). Anyway there might be a mole in the agency that might be leaking secrets again and it’s up to a vet Chris Hemsworth and a rookie Tessa Thompson to figure out how to save the world. Maybe it’s me; maybe it should have been left alone? But this entry was horrible as much as I may have found a movie that will put me instantly asleep when needed. I was expecting a little more because of the chemistry between Hemsworth and Thompson but for me at least it just never happened. Overall I just wanted Tommy Lee Jones back if that was possible as I give this poor or maybe just uninteresting entry 1 ½ stars. 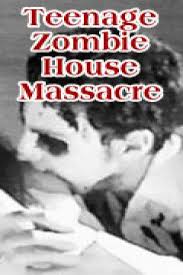 Teenage Zombie House Massacre (DVD) – A 36 minute film from 2000 that was shot in black and white from some dude in Ohio that has long disappeared from the independent scene. This sort of feature is based around teenagers who decide it would be a good idea to party in the local haunted house that has a history. By the time they get settled into the abandoned house to rub privates if not themselves with lots of drinking it is too late. The zombies that have been lying in waiting for victims to come to house are out and about and eating the partying teenagers. This film is so rough but is a fun reminder of the independent stuff that popped up randomly in video stores in the late 80s. So for nostalgia effect thank you but overall this movie needed lots of work but you had me at the title as I give it 1 ½ out of 4 stars.

House Guest Massacre (DVD) – Alex Vincent of “Child’s Play” fame goes the route of John Saxon in doing a film himself sort of. The film is now known as only “House Guest” I am guessing to resell it to horror fans that didn’t catch on the first time around? But anyway Alex wrote the screenplay, stars in the film, and composes the music in this modest budgeted $100,000 plus Indy film where he and his sister have a party. Jen and Rob’s parents are out of town and invite a select few friends in for a fun night of drinking. Until the one dude’s father shows to hang with them: spoiler alert he is the killer if you didn’t guess after seeing the dark black hair dye ten minutes before he arrives at the door. Besides it being weird dad shows up to hang out with mid-twenty something son he kills any chance of this film being interesting of his son getting it on with Jen! Now, I wasn’t expecting the next “Texas Chainsaw Massacre” but if Alex Vincent didn’t have anything to do with this film everyone would just laugh at this film even being thought of. Prove me wrong as I give this a ½ star for trying to fit in a senior citizen as a crazed serial killer.