Return to Frogtown (YouTube) – At some point one of my favorite unknown filmmakers Donald G. Jackson decided he could do a sequel to the popular cult film starring Roddy Piper “Hell Comes to Frogtown”. Problem or problems: do it on half the budget, have friends pull every string possible to get some genre names into the picture, and you don’t have Roddy Piper three years later to star in it. But Mr. Jackson didn’t let that stop him from making a sequel that would play on a regular basis on USA Up All Night? In place of Piper as Sam Hell, it’s Robert Z’Dar and he is now a rocket ranger. His partner played by Lou Ferrigno is captured by Commander Toty (which I thought he was Commander Toady or is that just my Yinzer English getting in the way of grammar?) And Toty is hell bent on turning the rest of the human population into frog mutants including Lou Ferrigno (if wondering Lou does turn green… I swear this is shit that happens in my dreams and they get stolen by the dream fairy) with his experiments performed by a scientist played by Brion James. So Sam Hell is sent in with his new partner Denise (Subspecies) Duff to look for Ranger Jones and save the world from the frog mutants! Sounds ridiculous and awesome at the same time especially when you add Rhonda Shear, Charles Napier, and Mr. Jackson regular Scott Shaw but fails to be entertaining in lots of ways. As much as I admire Mr. Jackson when you have no Piper to play Sam Hell this project should have be nixed or shelved for the time being. Mr. Jackson should have stuck it out with “Rollerblade” sequels and for that I give this bad sequel 1 ½ stars.

Barracuda (DVD) – Another bad late-70s “Jaws” rip-off trying to cash in on the craze at time has a chemical plant dumping pollution into the water causing mutations among the barracuda. Which in return they are attacking the local Palm Cove residents. But what makes this flick different from the bunch of this era is first, no Roger Corman and second, the film isn’t all about the killer fish. The film is more about a marine biologist teacher who gets in trouble with the local sheriff and figures out that the drinking water is the real problem as residents come down with a mysterious illness. The film is boring quite often but if you are a weirdo like me and like killer animal movies you do need to watch it at least once. I’ll stick with “Piranha” and “Humanoids from the Deep” myself as I give this flick 1 ½ stars.

V: mini-series (DVD) – In 1983, NBC promo campaign leading up to the TV event was amazing and unpreceded. No TV event ever really lived up to the hype until “V”. A two-night event about aliens/lizards that come to earth for peace (for now) and want to help earthlings worldwide. Basically someone wanted to make a film about the Nazis and what they were trying to do before and during WWII. And 80 million people tuned in to watch this cool event. With most humans accepting the aliens were here for peace some wanted to be sure before trusting them. That is where Marc Singer’s character Mike Donovan comes in as he is one of the few selected to go on the mother ship in L.A. to film. Once in Donovan finds out the aliens are actually lizards who have come to earth to suck the planet dry and make humans slaves or worse, food. By the end of the movie event Donovan is an outlaw wanted by authorities and aliens but is finding friends who also believe what he has seen and want to fight back. The event was fun sci-fi fodder that open the door to the mainstream but yet a dark, bleak look at what could happen if aliens came to earth? Plus, it had ‘Scary German Guy’ from one of my favorite movies of all time “The Monster Squad”. Thirty years have passed, the effects are a little cheesy, but the film event is still great to watch as I give it 4 stars.

V: The Final Battle (DVD) – A year later NBC decided to continue the battle between lizards and humans and again everyone watched in excitement. As now Donovan and others now have scientists on their side and eventually mercenaries as we are introduced to Michael Ironside’s character Tyler. Now the event was stretched out into three days instead of two which may have hindered this fun event. Now the aliens have taken the fight to the ground against the resistance fighters including capturing their leader, releasing Donovan’s son as a spy, having new armor that protects them from bullets, and spinning the video around about their alien leader being exposed as an alien lizard here to eat humans. This movie goes every possible direction into fleshing out there is some ‘visitors’ that were not for the invasion of earth and helping humans to the virgin who has sex with an alien and has an alien baby that wants peace. Weird stuff but I felt the story is more of a diluted mess than a fun, dark, bleak alien film like the first time around. What holds this event together I believe is the character Tyler who like the aliens is hell bent on destroying his enemy? Plus it showed Michael Ironside wasn’t just another forgettable genre actor but someone who has talent that worth recognizing. Overall, I enjoyed “The Final Battle” but the first go around was perfect and sometimes you just can’t reproduce that… I give the event 3 stars.

Evilspeak (DVD) – Stanley Coppersmith (Clint Howard) is nerdy, lonely kid whose parents are dead and is going to a prestigious military academy because he is considered a welfare case. So our main character is already an outsider and really has trouble being accepted by the other cadets. During a punishment of cleaning the basement of a church Coppersmith comes across a book that he feels a connection too. The book was written by the evil Richard Moll aka Esteban of course who believed in Satan, demons, etc. Stanley becomes so obsessed with the book he downloads it into the computer and sets up in the church basement for a ritual to bring forth Esteban. By accident Stanley kills the church drunk which sets forth the ritual and strange things begin to happen including an unbelievable, crazy, bloody murderous revenge rampage like no other in horror movie history. “Evilspeak” may not be the first satanic movie that comes to horror fans’ minds to watch but I bet you it is always in their top five list. I give it 3 ½ stars. 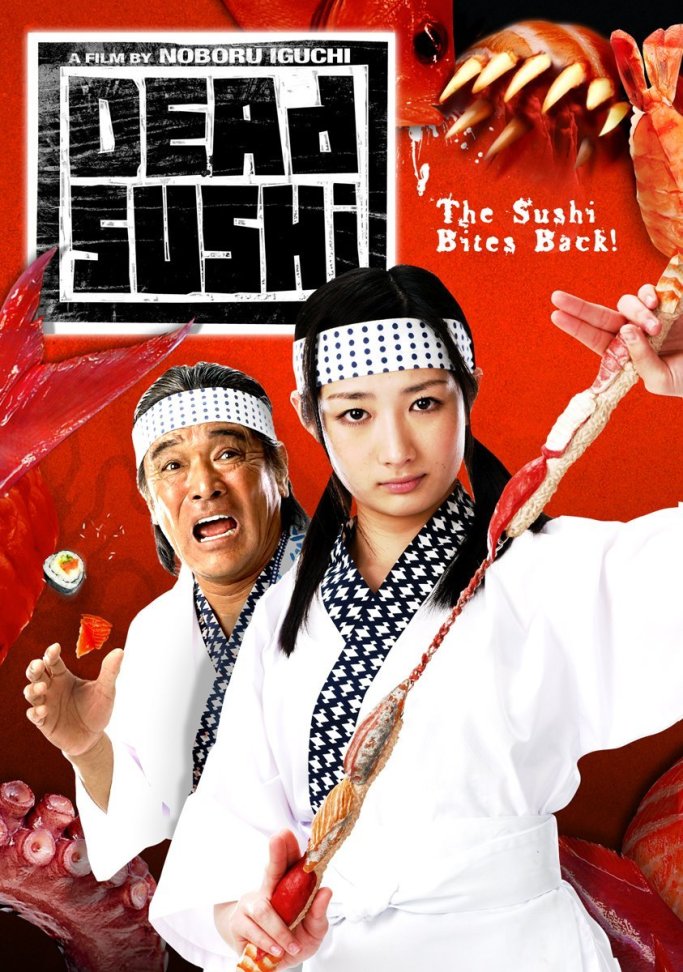 Dead Sushi (DVD) – A story about a young woman named Keiko who is training to be a sushi chef like her father. Her father is legendary in Japan for his sushi making. But the young lady can never live up to his expectations so she runs away. She gets a job as a waitress at a hotel that is known for its sushi. Some important drug reps show up at the struggling hotel and Keiko does everything to offend them because she wasn’t born to be a waitress. But once a hobo shows up with a mutant sushi and injects it with his serum to perform his bidding to kill the drug reps, chaos ensues! The mutant sushi infects other sushi turning it into zombie sushi that attacks all in the hotel and Keiko understands what she is born to do and that is kick zombie sushi’s ass and prepares it for people who want it done right! But first she must fight off the hobo who turns into a horny mutant tuna that is wielding an axe… If you enjoy films like “Wild Zero” and “Bio-hazard” you will enjoy this hilarious, chaotic, and completely ridiculous fun film as I give it 3 stars.

Phantasm V: Ravager (Theater) – Reggie is wondering the desert looking for Mike and not sure what world he is in any longer. Years have passed since Reggie has seen Jody or Mike and is starting to question if he is just dreaming all of this? The story revolves much more around Reggie than ever before as he is falling back forth between what’s real and what is not? But fighting between the desert, the senior home, and being on the road helping a young woman Reggie is awaken in a dark horrible world strapped to a table by The Tall Man. Some unknown people with guns help him out and lead him to their leader Mike. And Mike explains to Reggie he has been out of commission for years as The Tall Man was using his mind for information since the ending of part four film. Now, it’s a post-apocalyptic world that The Tall Man and his minions have completely taken over. With that they must fight The Tall Man in his world to stop him. To be honest it’s really hard to explain exactly what happens in this movie if anything at all? The best way I can tell you the reader about is: it has that feeling of “Phantasm IV” where they never had the budget to pull off what the story dictates and mainstream horror fans will shit all over it. But five years from now, regular horror fans will like it or get it? Personally, I am glad the sequel exists and it is finally out there. But it is hard to blend visual and practical effects unless you have the budget. I still want the original idea of Bruce Campbell and Reggie hooking up and fighting The Tall Man in the post-apocalyptic world but we all know it’s not going to happen now (R.I.P. Angus Scrimm). In a weird way the film is a fitting end to the series or a new beginning and hopefully some studio with money (I am looking at you Shout Factory and Anchor Bay) will understand that? The series has always taken weird, dreamy, and odd turns in the storyline and for that I am grateful that “Phantasm V” exists as I give the film 2 ½ stars. See me in five years just like part four and I bet you I like it more then as it will have more time to sink in. But more than anything this film will have the horror community talking and debating for a long time what we actually watched and what it all actually means? And thank you Don Coscarelli for doing it your way.