More Brains! A Return to the Living Dead (DVD) – Another great documentary about a horror film that is a favorite of many horror fans. But this isn’t just any horror film the documentary covers… it’s the zombie film that changed everything about zombies. Just like 1968s ‘Night of the Living Dead’, ‘Return of the Living Dead’ caught everyone by surprise in the mid-80s by introducing zombies wanting brains, zombies talk, and be a new kind of entertainment. This documentary tracks down all who were involved and learns of how it all came together and how no one exactly knew that this zombie film would take the next step in zombie film evolution. A must see for all as I give it 4 stars. 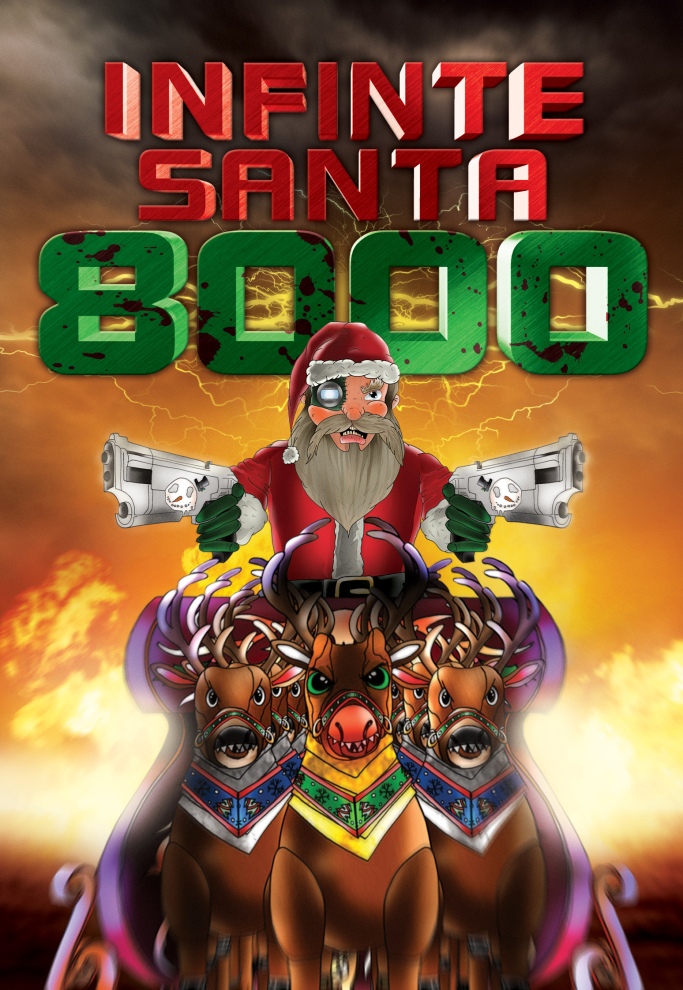 Infinte Santa 8000 (DVD) – What once started as a webisodes project from Michael Neel and Greg Ansin after their awesome independent anthology ‘Drive-in Horrorshow’ has now become a feature length animated film after two long years of hard work. And I am here to say the hard work paid off in this beautiful animated feature that features a Robo Santa a world that is far into a war torn future! This is the type of film that makes me wonder if the filmmakers behind it reach into a horror fan’s dark soul and bring to life something of the likes of Robo Santa. The film has a great and entertaining beginning that sets the pace for you the viewer of knowing what your brain is about to witness as Robo Santa is facing off a full robot in a bootleg Thunderdome. And they are fighting for meat as meat is scarce and the new money with the world looking like one big wasteland straight out of a ‘Mad Max’ film. But as Santa goes back to the North Pole with his Robo reindeer he knows he is going back to the one person who still believes. And her name is Martha. Martha is what keeps the old man going. But there is some who want to take that away from him and the menace that wants to take the happiness away is the “Creator” who made Martha. The Creator sends an evil bunny with exploding peeps, monkey men, and mutations, even Martha clones to kill Santa and steal Martha away only to destroy her for good. It is a holiday classic of good versus evil in this animated feature that is complete chaotic fun! It is not only one of the best independent films of the year but I am glad to say one my favorite horror films in the past few years. The dedication of Michael Neel and all who are involved with Burnt Reindeer Films should be proud of their project that I would put up there with the likes of ‘Heavy Metal’, ‘Fire and Ice’. What sealed the deal on this great film was the quote from Robo Santa in the film, “Just how I like my mutants, ugly, crispy, and dead!” That is perfection for me. Horror movie fans if there is one horror film you buy this holiday season it must be “Infinite Santa 8000” or Robo Santa and myself are coming Mad Max style down your chimney and throwing you in the bootleg Thunderdome! I give the film 4 out of 4 stars and it can be found at www.midnightreleasing.com and more info about Greg and others can be found at www.infinitesanta.com . If you need more look for the intentional or unintentional video game Gauntlet scene during the big fight between Robo Santa and Creator’s minions.

Eureka (DVD) – An odd Rutger Hauer film from 1983 that also stars Gene Hackman, Ed Lauter, Mickey Rouke, Joe Pesci, and Joe Spinell! But what Rutger Hauer film isn’t a bit odd as most of his career choices always make you think. But Gene Hackman is a man who searched for gold for 15 years during the time of the gold rush finally finding after a very weird encounter with a woman who helps tell his future. Years later and Hackman’s character now owning an island and more money than can be printed finds himself feeling like his world is falling apart as Rutger Hauer is taking his daughter away, people want his island, and they want to kill him. Weird but a fun watch for Rutger Hauer fans as I give it 2 stars.

8213: Gacy House (DVD) – A found footage film about Ghost Hunters investigating a vacant home in March 2006. The home is supposed to be where Gacy’s old house was. They even say in the opening credits that the original home was destroyed in 1979 I believe and a new home was built there. But during the film during the so-called investigation the ghost hunters talk about the old house, wiring, etc. This is the type of film that just gives paranormal experts a bad name hell if I was a ghost hunter I would be insulted by this big piece of elephant shit! I give it 0 stars. 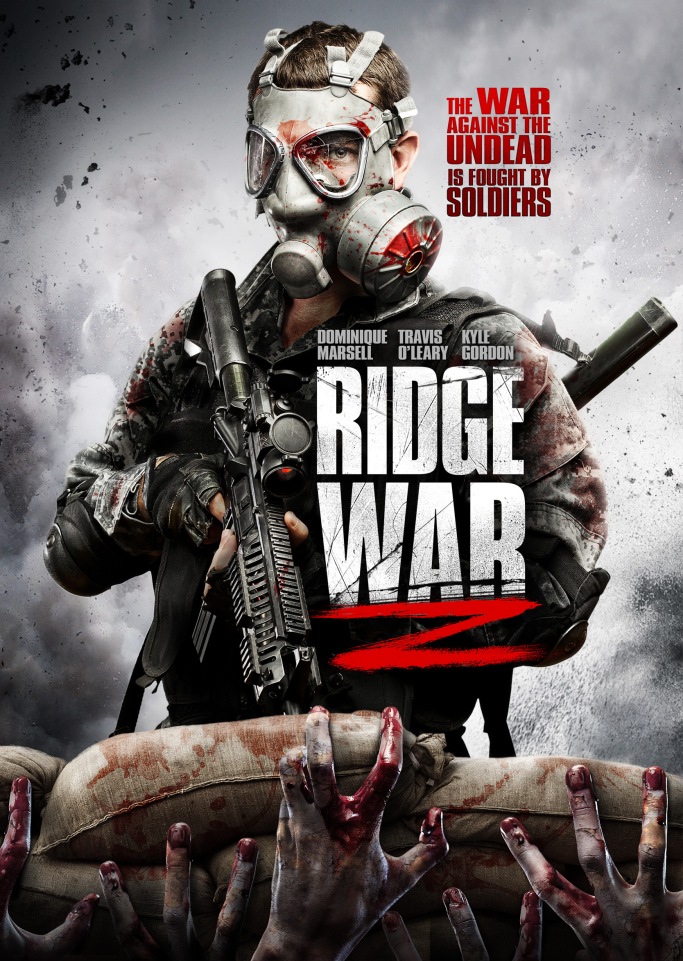 Ridge War Z (DVD) – An independent zombie film that takes entirely different approach but at the same time trying to cash in on the similar title of Brad Pitt’s project. A reporter tracks down three soldiers who survived a battle with zombies to protect a ridge and write a book on it. The filmmaker Alek Gearhart takes the approach of the reporter helping the soldiers get over the evil events that happened and to relive some of the horrible events to make their lives better and help him to write his book based on the events. The filmmaker dedicates the film to all veterans who were in a war as tries to use this dramatic approach to show how tough it can be for vets to live with the burden of war and the decisions made during the battles. It’s different, a little talky at times but I gotta give credit to the filmmaker doing something very different with the zombie genre. I give the film 2 ½ out of 4 stars and can be found at www.braindamagefilms.com .

Amnesiac (DVD) – A foreign independent film that tries to outsmart the viewer by over thinking the plot and just confusing the shit out of me by the end of the film. The film begins with two sisters and the one’s boyfriend Thom going all ‘Witchboard’ with an Ouija board by doing a séance to contact a spirit. But as the three get more involved in the spirit’s world as things go weird to the point that the film becomes about the spirit who killed people in a past life but is now haunted by the people who were contacting him through the board… maybe? All I know this film my head hurt and it got boring as the filmmaker over thought the plot. I give the independent film 0 out of 4 stars and you can find it at www.midnightreleasing.com .

The Man with the Iron Fists (DVD) – A film that steals a bunch of random Asian Cinema and smashes it into a crazy action film to pimp RZA! It’s not bad, it’s not good, and it’s just one of those films that are a little too much over the top. I give it 2 stars.

Daisy Derkins, Dogsitter of the Damned! (DVD) – Daisy has just gotten a part time job being a dog sitter for a very strange dude in a black robe. But he gives Daisy permission to do pretty much anything she wants as long as she keeps an eye out for the dog. Bad move Ex-Lax! Daisy invites two friends over who want to get Daisy high and drunk and bullshit about the guy who is stalking her after one date. Once they are about to enter the point of no return in drunken terms Daisy hears a voice or laughter, causing the friends to call paranormal expert/pinup model Delia to find the issue and film it for her cable access show. If that wasn’t enough to scare Daisy her stalker comes to the house to sing to her, a witch begins to fuck with them, and a serial killer who looks like a bootleg combo of Dimebag Darryl and John Carl Buechler killing everyone in the house, and we have a wendigo that tries to rape the paranormal expert/pinup model. This all happens just because the strange dude parties with a Mexican wrestler and just needed to feed his dog the Dogsitter. Big boobs, blood, woman with tattoos and a Mexican wrestler… I was entertained. I give the independent flick 2 ½ out of 4 stars.

You can purchase my latest book from Library of the Living Dead Press called, “The Big Ass Book of Gross Movie Reviews” at www.amazon.com .

Don’t forget you can also hear Kyle Poling and I talking about horror flicks on a weekly basis on the Bloodbaths and Boomsticks podcast at http://bloodbathsandboomsticks.blogspot.com/

Plus you can always go to the greatest T-shirt place online or if you are in Texas visit the store of “Fast Custom Shirts” where T-shirt Joe is the only place that you can purchase a Gross Movie Reviews t-shirt but also Cannibal Campout, Woodchipper Massacre, and Spookies T-shirts also!!!! Go towww.fastcustomshirts.com for details.