The Dingleberrys (DVD) – Another S.O.V. flick that is one of these so-called “lost films” from Warlock Video in 1986 aka 2012. The main plot of the film is similar to ‘Critters’ just with poo globs! The disclaimer at the beginning of the film claims this is the worst film ever made and it is now shown in all its horrible glory of a space gladiator landing on earth to capture or kill the space poo globs. Quasar wants to rid the universe of this menace but will need help from some young horror nerds in order to accomplish the task. The film really isn’t feature length and far from the worst movie ever in my opinion. I have seen much worse, this is more of just some inexperience kids having fun with some cool poo creature masks from DWN Productions that made me laugh a couple times. For that I give this Indy flick 1 ½ stars.

Ravagers (On Demand) – A 1979 post-apocalyptic film that stars Richard Harris as a man who wanders the wasteland after some bandits kill off his girlfriend. They were planning to go searching for a safe place called “Land of Genesis”. Thus causing Harris to seek revenge and run from these horrific people as they will hunt him down until death. See one day it stopped raining thus killing off life slowly and sending the world into chaos. After quite a bit of time it started to rain again but most of the population died off. Survivors went underground and separated into two gangs of folks called the Flockers and Ravagers. Now in 1991, Ravagers are the type of humans if you can consider them that any longer that look to rape and pillage what is left above ground. The film wasn’t the most exciting flick in this genre for me as it felt more like a TV movie but could not find any info claiming it was as I give it 2 stars. Note: Film is hard to find on any format but has recently been made available on Amazon Prime.

Planet Earth (DVD) – It is 2133 and the earth has survived the apocalypse and John Saxon aka Dylan is our new hope! Dylan was frozen in the old world and awakens from his sleep by PAX to build planet earth up again. ‘Planet Earth’ is a 1974 TV movie that was a sequel to ‘Genesis II’ that continues the John Saxon character storyline of a man from the past helping the future. In this adventure PAX has found Amazon women who are buying and trading men as slaves to do their bidding and the men are called “dinks”. PAX believes this is where a good doctor friend of theirs has disappeared. So they send in a small team to search for the doctor and talk to these Amazon women in hopes of helping them? Instead John Saxon gets a lesson in being a male slave and humanity still sucks as I give the TV flick 2 ½ stars.

Jekyll and Hyde… Together Again (DVD) – An early 80s comedy based on the old Dr. Jekyll and Mr. Hyde story with Dr. Jekyll being the finest surgeon in the world who has just retired from doing surgery ever again. The surgeries are getting in the way of his research but the hospital he works for has other plans as a huge donor wants a total transplant and Jekyll is the man. During his research the good doctor falls asleep during an experiment and accidentally snorts his concoction (cocaine) and becomes a monstrous dancing punk pimp who needs sex! Of course he becomes addicted to this formula and hilarity ensues. This film has not aged well and I firmly believe ‘Doctor Detroit’ (a film a little similar) is a better product than this project. There are most likely still fans of this film or they wouldn’t have released it on Blu-ray but I give it 2 stars.

Killer Waves (DVD) – An Indy film from James Balsamo where a killer in an old diver suit is slaughtering people who are involved in a surfing contest. The film has its funny moments, good camera work at times, fun cameos, huge body count, and a surfboard made out of human flesh. But also the film as its issues of running too long and feeling like there was nothing script wise outside of the killer in the old diver suit. I liked his film ‘The Litch’ but this flick felt thrown together more than thought out completely. I do know Mr. Balsamo has a growing fan base that I believe this project caters to more than the average independent film fan as I give the film 2 stars.

Metal Noir (DVD) – Author Laurel Oberion has just bought a home where she hopes to jump start to write her next book. As she settles in and struggles with her “writer’s block” the more she dreams about her haunted home she has just moved into. Her dreams are not lying as Laurel has satanic nymphos in her basement who want her soul. The demons’ plan is too slowly torture the young lady to madness that sends her into their orgy of descent for their dark lord! This 1990 S.O.V. flick was never properly released and was believed lost because the company that had the rights went into bankruptcy and closed. So thanks to Tony Masiello starting a project in 2012 that deals with “S.O.V. films” he happened to watch the movie on a random VHS tape. From there Masiello was able to get in contact with the ‘Metal Noir’ filmmaker David R. Williams and begin the process of putting together a special edition of the film to be released for the very first time in 2019. The DVD is loaded with extras and perfect package for that independent film collector as I give it 3 stars.

Ghoul Scout Zombie Massacre (DVD) – An evil brother/sister team trying to scheme a plan to take over the world with a secret formula. Their goal is to inject the emo boy population and use them for smut films to sell overseas. So how do you get these young men to take the secret formula? How about using sexy reform school girls to sell Girl Scout, oh sorry ghoul scout cookies that sister Cassandra houses. When the males begin to eat the cookies something goes wrong. Instead of them being under control of the evil duo they become flesh eating ghouls at a concert that begins to eat all the attendees. Those who didn’t eat the cookies must defend themselves and find the antidote. The film plays out like if Troma made a full fledge zombie film that I would have liked to see focus more on the gimmick of “Ghoul Scout Cookies” than the nudity? But hey the film is what it is… Saying that if the film was edited down to a lean and mean 70 minutes (not 111 minutes long) I can easy see this becoming an Indy cult hit. But some filmmakers fail to see how much editing can help their projects for the long haul as I give it 2 stars. 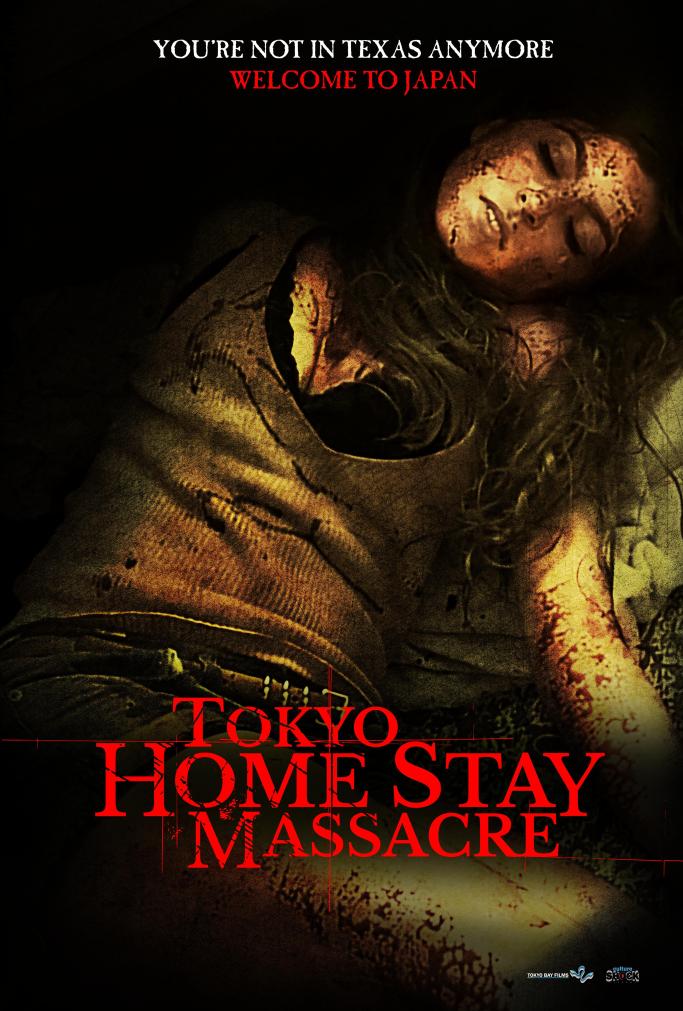 Tokyo Home Stay Massacre (DVD) – Three college kids head to Japan to stay with a host family. Their goal is to get the clicks for their YouTube channel as they are unlikable characters that even have a subplot about one of the three getting an abortion to project their relationship. Little do the three know is the family plans to drug them, torture them, and eventually set them up for some kind of weird sacrifice. The film was somewhat interesting but once midway through the film tries too hard to be weird and lost me as a viewer as I give it 1 star.

Zombies (DVD) – A 2017 film I stumbled upon stars Tony Todd where a zombie apocalypse just happens and takes over the world. Detective Sommers, Luke, and crew decide to set up shop in their small town and go out on missions to save folks nearby and bring them into a safe place. Their goal is to keep people safe and gauge how long this will go on? This zombie film goes more for dramatic take than the possible bloodbath zombie films can be but with an unusual twist ending as I give it 2 stars.

Sky Sharks (On Demand) – Trailers looked great, the movie idea sounds great, but… Anyway, a large warship has been found in the artic and a flight from Vancouver has been attacked by Nazi sharks controlled by undead SS officers! A once thought lost genetic experiment from WWII has survived and has resurfaced. The man behind Reichter Tech was once a part of these so-called secret experiments and has kept himself alive because of them. The K7B formula was made for world domination which killing their own people which he did not agree with. Now the Sky Sharks are mutating and making them harder to detect and defeat. Because of this the only solution left is another horrible experiment from Reichter in 1968 called Project: Dead Flesh! With an incredible cast and all this said sounds like it should be a wonderful B-movie for the ages instead plays out like a dull hot mess. Or best way to summarize, “It’s no Iron Sky” as I give this disappointment 1 star.

Day of the Pigs (Vimeo) – A 12 minute short about three men in Luchador masks who just did an armed robbery of a bank. They run into a bit of misfortune during the getaway and need to adjust their plan and find a phone. Now walking they find a farmhouse where they believe their prayers for a phone has been answered. It looks even better with the farmhouse being owned by two beautiful sisters who are not what they appear to be? A crude, but very cool short film from Michael S. Rodriguez, as it combines the horror and action genres in an entertaining manner that shows this filmmaker is very capable of putting together a bigger project. Movie nerds this is another to remember for the future as I give this flick 3 stars.

She Wolf Rising (DVD) – Gina Skylar (Tiffany Shepis) is a popular horror film actress who uses her sexual appeal to convince longtime fan Jake to help her with her boss Lonzo. Now most of the film is told like a story from Jake’s point of view to his best friend after finding Gina Skylar’s latest unreleased film on DVD in Jake’s apartment. Gina has Jake investigate people from Lonzo’s work past to understand what is going on as Gina wants to be the number one scream queen. The more Jake gets involved with Gina’s worries the more the film becomes a love story with werewolves. The movie has a hot mess appeal but leave it to the super talented Tiffany Shepis and a good supporting cast in (Debbie Rochon, Tina Krause, and Alan Rowe Kelly) to keep the film interesting enough to make it to its incoherent ending. As usual Tiffany always makes a movie that much better with her amazing on-screen presence but this movie feels like it couldn’t exactly decide what it wanted to be throughout as I give it 2 stars.