Bomb City (DVD) – A film based on a true story of punks who trying to mind their own business vs. the usual Texas football, so-called Christian family hicks in a town near Armadillo, Texas in 1997. The story revolves around a young man who may look like the typical punk on the outside but was an artist on the inside. He and his friends just didn’t fit in the typical way of life in this Texas town and one night, one thing led to another and a young man died. The kicker is the football that maliciously ran this kid down was a football player and served no jail time. Hell, he went to college! A really interesting true life story on film that needs to be seeked out by you as I give it 3 ½ stars.

Razorteeth (DVD) – Imagine the Polonia Brothers in 2004/2005 making a remake of “Piranha” and Jon McBride did the music? You have your movie… A government salvage mission of a sunken sub goes sideways when a package is retrieved from the wreckage but lost in a plane going down over a small town lake. The experimental killer fish comes to life and begins eating all that enter the water. Of course the government investigates to see how much they need to cover up or who to kill off? Kudos to the brothers for saying fuck the budget and still giving us weirdos that like ‘Killer Animal flicks’ a fun no budget film as I give it 2 ½ stars.

Video Party Massacre (DVD) – A wonderful treat for fans of “The Video Dead” as this short film from 2014 shows the new generation how much fun the original film was? A man is delivered a T.V. he never ordered. He of course plugs it in to see how it is but it only plays one thing. No matter what channel he turns to it keeps playing the same movie. A black and white film with a man that has a machete and mask on and he is killing people. The man goes to sleep and the T.V. comes to life allowing this masked killer to exist in our realm. Great retro stuff as I give this 3 out of 4 stars.

B-Documentary 2 (DVD) – Nick Charles is back with a sequel to his great documentary about the independent film world. With introduction done by Lloyd Kaufman of course, Nick and crew worked their asses off to get opinions and conversations from several actors, actresses, and filmmakers. Some are well-known and some are on the rise as they dig deeper in this documentary to help explain things to audiences that may not know what goes on in the independent film business. This time around we get: Gary Sherman, John Bloom aka Joe Bob Briggs, Adam Green, Lynn Lowry, Tiffany Shepis, Kevin Van Hentenryck, Glen Coburn, James Balsamo, Mathew Fisher, Kevin Forte among several others. They were all asked questions such as “How they got started?” “How should future filmmakers get started?” “What is the key to make a successful movie?” You see where this going but the varying opinions is what amazed me because I could argue different points with each of the people interviewed but also agreed with several things that are said on this DVD. Viewers and filmmakers alike this isn’t just a ‘need to watch’ movie… People this is a ‘need to own right now’ documentary that gives you more than just an inside look of independent filmmaker but a peak into the lives of these celebrities you may not have had the pleasure of knowing or hearing of their experiences. I believe Nick and crew got the right mix of talent that is featured in this movie as they are all just different enough to make this work flawlessly. This absolutely perfect film documentary should be used in film school as I give it 4 out of 4 stars.

Soultaker (DVD) – A B-movie if there ever was one where Joe Estevez is ‘The Soultaker’ and Robert Z’dar is the ‘Angel of Death’. These two get into an argument when a group of people escape a car accident or so it seems. Once the group gets over the shock of somehow surviving the horrific accident they quickly find out they are not alone. As they are being chased by ‘The Soultaker’ they try to figure out why people can’t see them or hear them as the group tries to get home for the night. A very cheesy but entertaining flick for the B-movie lovers as I give it 2 ½ stars. 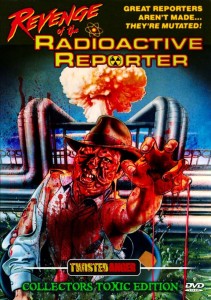 Revenge of a Radioactive Reporter (DVD) – The film has a few titles but these were the other two that was mostly used during its 1990 release: Radioactive Reporter and Atomic Reporter. This Canadian film is about a reporter named Mike who is trying to break a story on a local power plant leaking toxic waste. He believes he has the evidence but needs someone from the plant to come out and say something to prove his findings. So when Mike is invited to the power plant the big corporate types have him killed or they think he is dead when Mike is kicked into the toxic waste. His girl Richelle is having a tough time getting over Mike’s death but the corporate big wigs have it out for her to since they are unsure what was said to her about the story? But a new hero of sorts is born or at least just for this movie as a disfigured Mike begins his disgusting gooey crusade to kill all the corporate types at the power plant! Yes it is the Canadian version of “Toxic Avenger” but don’t let that stop you from enjoying all the cool effects and just a fun horror movie about toxic waste. I give this feature 3 stars. 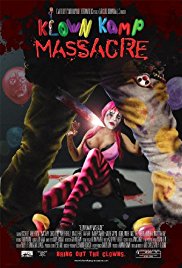 Klown Kamp Massacre (DVD) – May 15, 1991, Edwin the clown went on a murderous rampage at clown camp at Bonzo’s ranch. Many years later and Edwin who was never caught is enraged when the famous clown camp is opened again. Clowns come from all over to learn from the best but are being stalked and killed one by one. Pay attention because on purpose it is “Friday the 13th” with clowns but has a fun twist that makes the film concept fun in the end. This low budget horror film has a little bit of everything: blood and guts, bootleg Crazy Ralph, clown porn, not taking themselves too serious, and a little bit of talent to pull off a must-see massacre movie that I wasn’t expecting to be this damn entertaining! I enjoy finding gems like this as I give it 3 stars.