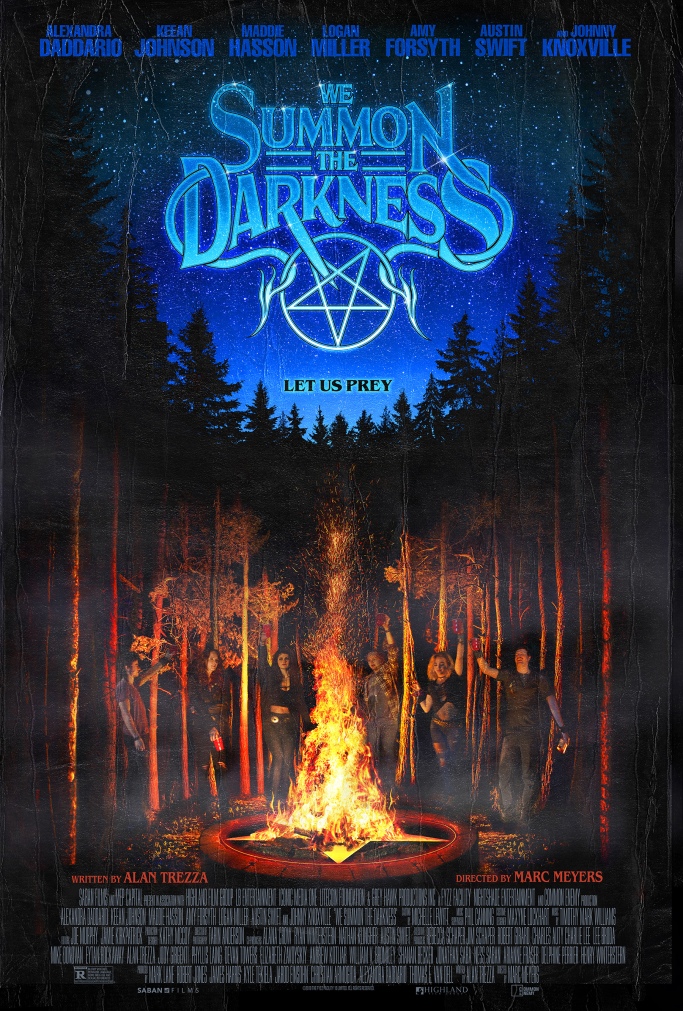 We Summon the Darkness (DVD) – Holy balls this film was fucking great! The film is set in Indiana, 1988 following three young ladies who are heading to a heavy metal concert. Along the way we keep hearing on the radio about some satanic murders sweeping the mid-west. The three metal goddesses reach the concert and meet three metalhead dudes and they all seem to get along. After the concert the boys are invited back to Alexis’ house or her father’s house to be precise. They start drinking and play a little game that gets a little risky. But things get a little weird as the boys pass out and awake inside a room full of bloody pentagrams and that is where the fun begins. The cast, story, effects, and the ending are a wonderful blast. I would like to tell you more about the film but I rather not ruin it for your viewing pleasures? Put it this way this film is another entry into my “Best of 2020 list” as I give it 4 stars.

In Search Of: Pittsburgh Bigfoot (Vimeo) – When you have no money, know a bunch of people who want to be actors, and your passionate about your project you get what filmmaker Luther Cosmo Ickes Jr. gets… a hilarious and entertaining independent movie about Bigfoot. Or is it Bigfoots? Don’t know that is always a conversation that gets started whenever I review a Bigfoot movie and plus this project has multiple Bigfoot/Bigfoots! Anyway three yinzers are interested in the latest Pennsylvania sightings of Bigfoot. They wait out for spring since the winters can be gawd damn cold around here n’at. So the three chums head to the woods for some camping, illegal or legal drug use depending how much now that Pa. has turned the corner on that stuff, and looking for evidence of Bigfoot. Oh these three are not the only yinzers looking for Bigfoot apparently the Devil is also according to the witch of the woods and a goat dude with a giant dong! Of course this spells hijinks for the yinzers in the woods as they get lost, screwed up on shrooms, and find themselves in a war between the Devil and the Bigfoots as Bigfoots hitch a ride to the burgh. Lou tries to bond and save these creatures but in the end we all know what happens when the church tries to get involved. The film has many flaws but that is the beauty of Luther’s film: it is a film you grab friends, a case of beer and enjoy its glory because it isn’t going to win an Oscar for the love of Rutger Hauer it’s a gawd damn Yinzer Bigfoot movie as I give it 3 out of 4 stars.

Relic (On Demand) – So grandma goes missing for a few days and ma and daughter come to her home to hang out in the moldy home. Or as the wife put it: a very long and boring version of ‘Stranger Things’. Take it for what it is as not a whole lot goes on except Grandma is sick and there is something wrong with the house. For me there just wasn’t any payoff after watching this long buildup of a movie as I give it a ½ star.

Amityville Island (DVD) – Mark Polonia goes to the “Amityville well” again as a mother of four moves into the cheap area only to become possessed and murder her kids. Sent to prison and on death row she is forced to fight in the basement of the place so it could be streamed for creeps. If that wasn’t enough she is then transferred to some scientist weirdos that label her as Patient 59. Unbeknownst to her captors and weird scientist dudes she is still possessed by the Amityville curse whatever that is? Along the way we meet a freelance reporter who is trying to connect all the murders over the years and how they connect to Patient 59? Don’t get me wrong I love the Polonia Brothers but this film truly feels it is all over the place but really doesn’t have a plot. Also what doesn’t help is I get a possessed shark for three seconds. I felt cheated folks! The shark is on the gawd damn box art! I wanted 75 minutes of an Amityville possessed shark is that too much to ask so in saying that I can only give this Mark Polonia film 1 star because I know Mr. Polonia can do better.

D-Railed (DVD) – It is Halloween and there is nothing like a “Murder Mystery Train” party going down where people pay to be a part of dinner and a ‘who done it” play. This is an expensive dinner party so you have to dress the part but as everything is about to start with the train roaring down the tracks a real robbery takes place. Events unfold quickly as people try to stop the robbery with a few people getting shot and the train derailing into a lake bed. The survivors trying to help each other and see if they can get to land easily must contend with a creature looking to consume them. Doesn’t have a strong ending but does have Lance Henriksen explain a few things when needed as I give this neat little horror film 2 ½ stars.

Thunder 3 (VHS) – Or as the film is also known to most ‘Thunder Warrior III’. Mark Gregory returns as Thunder for the third time to help defend his Native American community. This time around some racist weekend warrior townsfolk get ahold of Thunder and abuse him and his people. Thunder wanting to do this the right way takes it to the cops and demands money to replace their homes. But the racist townsfolk want none of it so Thunder once again goes all Rambo on their asses and ruins the town until they pay up for revenge. It was pretty much the same as the last two entries but somehow made to look cheaper and less action in some ways as I give it 1 ½ stars.

Raindrops (YouTube) – Philip Brocklehurst never rests as he has yet another new short film. This time around a plot about a gentleman who is slowly driven insane by raindrops on the window seal. This man soon reacts in a very horrific way in order to remedy the problem. Philip’s shorts get to the point quickly and usually star him as it seems he is challenging himself or teaching different things about filmmaking to himself. I give it 2 ½ out of 4 stars. His Facebook and YouTube page usually have links to his independent film work that is well worth checking out.

Are You in the House Alone?! (DVD) – I never seen this 1978 after school horror special that starred a young Dennis Quaid. And a little sneaky bastard he is. Gayle is newer to the high school as her parents moved to the neighborhood because it was supposed to be safer and have a safer school for Gayle. Gayle finally getting back into the dating game at the urge of her best friend finds a guy at school that really fits her. But at the same time Gayle is being left nasty notes in her locker and crank calls at her home late in the evening. Gayle with help from her best friend blows it off quickly but as it escalates Gayle becomes worrisome and even goes to the school principal. She is being stalked on her dates and her babysitting job which sets her up to be raped. But instead of her going all “Death Wish’ on the person she finally gets her revenge by proving to people he is an asshole rapist that even his rich family couldn’t get away with. The film opens up with Gayle being taken to the hospital then flashes back to tell the story up until then. The film tries its clever ass off to make you think it is several different people and well worth the payoff as I give the film 3 stars.

Black Cobra 2 (DVD) – Never mind I didn’t watch the first flick cause I cannot help myself when it comes to sequels. Anyhow Fred Williamson is a hard-nosed Chicago cop in this Eye-talian action thriller. After Lt. Robert Malone gets himself into an incident with him gunning down a criminal he finds himself in an exchange program with the Philippines. After arriving in the Philippines and getting his wallet stolen he partners up with Nicholas Hammond (TV 70s Spider-man himself). This is when I thought I was in for an excellent action bonerjam! Instead I was in for a limp action flick where it looked like not just Fred but all involved were just going through the motions. It seems the plot of the story is the two go down the rabbit hole of the stolen wallet leads them to a criminal ring of drugs, robbery, and some z-grade violence. One good thing came out of this film and that is we get to see a dude get shot in the dong! I am a huge Fred Williamson fan and 70s Spider-man fan but this was pretty much a dud as I have to give it 1 star.