The Murder Collection Volume One (DVD) – A film from the famous Toe Tag Pictures aka Fred Vogel and crew. The best way to describe this film is the new generation’s “Faces of Death”. Yes indeed if you are over the age of 35 you remember the days of these crazy videos that the shelves in the early days of Video Home Movies. Now that I am done remembering the old days, let’s talk about this sick entry into the Toe Tag catalog. An unknown man named Balan has been taken into custody for hosting a web show that shows violent footage from around the world. This collection of violent acts was just a taste of what Balan posted before being arrested. Fred, Shelby, and crew once again test the limits of violent content and if you the viewer can take it? Another great project from some talented folk as I give the flick 3 out of 4 stars and you can purchase this fine flick at www.toetag.biz .

The Jitters (VHS/DVD-R) – A lame ass gang is trying to take over Chinatown, one store owner at a time. Well leave it to good old James Hong to be storing vampire Asians in his basement who are not ready for the afterlife since they have unresolved issues. But apparently this very lame gang of criminals since it’s rumored the one store owner Mr. Lee, who they killed, has over a $100,000 stashed somewhere. So the gang makes it their top priority to harass Lee’s niece and future husband for the money. Oh I forgot the Asian undead hop also! The off the wall flick makes for a great double feature with “Robo Vampire”. This film so bad it’s good especially when it looks like they just told James Hong to act like his crazy old character from “Big Trouble in Little China”. I give the film 2 ½ stars.

Demon Warp (VHS/DVD-R) – Sasquatch is a mother fucking alien that crash landed over a hundred years ago and terrorizes a location that looks like it was stolen from “Friday the 13th Part 4: The Final Chapter”! And it just so happens to star George Kennedy, Billy Jayne, and the beautiful Michelle Bauer… 3 stars just for whoever thought this was a good movie idea!

Dead Body Man Chronicles (DVD) – A woman leaves her kid with drunken crazy ass grandpa while she goes to work. So grandpa decides it’s not only time for the kid to start drinking but tell him the story of the world’s greatest serial killer, ‘Willie’… and Willie is a chicken fucker! But the point is Willie’s life was screwed from the beginning when his stripper mom gave birth to him while stripping and her water breaks all over her customers. Willie knows he is screwed up but finds a home with some crazy people for a while who somehow understand him which eventually leads Willie getting into a fight with a dude in a chicken suit that leads to butt sex. It is the most random and hilarious serial killer film I have ever witnessed. For that I give it 2 out of 4 stars. 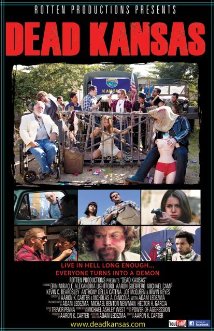 Dead Kansas (DVD) – What once started as a short web series turned into a full fledge film or web series parts put together out on limited edition DVD. The film focuses on a father and daughter Emma in the Midwest who is just trying to live life the best they can since the zombie plague aka “the rottens” began years ago. Their neighbors or nemesis Jebediah and crew spend most of the film trying to kidnap Emma as they claim they want to begin “repopulating”. After Emma’s father is injured during the aftermath of a twister she spends her time on the run and trying to find a doctor who may have a cure for her father before he turns into a ‘rotten’. But the intriguing thing about the film is filmmaker and writer Aaron K. Carter doesn’t flood his film with cheap zombies but gives you the zombie, sorry, the rotten’s point of view when attacking and searching for flesh. A very cool little independent flick that was shot in California and nowhere the Midwest and also had a little help from great cameos in Irwin Keyes, “American Horror Story’s” Ben Woolf, and the talented and cute Juliette Danielle. Folks this flick is worth tracking down for the purchase and support of Aaron K. Carter as I give it 2 ½ out of 4 stars. And yes they do admit there is two different actresses playing the character Emma, it’s called “limited time in the world of independent filmmaking” and I totally understand. Find out more info at: https://www.facebook.com/deadkansas?fref=ts . You can also now view it on Amazon Instant Video: http://www.amazon.com/gp/product/B00U143XLI

Night Wars (Laserdisc/DVD-R) – Another Dan Haggerty flick that has David A. “I made Sledgehammer” Prior directing a story about two guys who are having nightmares of their days in Vietnam. And their dreams or nightmares are becoming more real every time they sleep as they are haunted by a buddy they left behind and a douche bag traitor that wants to torture them every time they fall asleep. Great, fun, crap that has one of those dream within a dream endings as I give it 2 stars just for the two dudes shooting up their apartment from the bed and couch!

Wild Country (DVD) – A lesser known horror film from the UK in 2005 that is about a wolf creature/werewolf. The story begins with a teenager giving birth in a hospital and giving the child up for adoption. Six weeks later she is out with her youth group going on an overnight hike. Faced with her ex-boyfriend showing she begins to rage and kick him in the beanbag. Once anger passes and the group tries to settle for the night they are scared by the local scary farmer dude then begin to hear a baby crying in the distance. Curious the girl and her ex investigate and find a baby in the ruins of a castle along with several dead bodies with their throats ripped out. The kids trying to do the right thing pick up the baby and bring it back to the camp site but now begin to hear scary unknown sounds like a monster is stalking them. The film keeps the plot simple, interesting, and bloody… Plus it does not hurt it’s a horror flick from over the great big body of water and that usually means good things. I give the killer wolf flick 3 stars.

And do not forget to order your copy of Gross Movie Reviews: The Wrath of Gross at: http://www.lulu.com/shop/tim-gross/gross-movie-reviews-the-wrath-of-gross/paperback/product-21975934.html