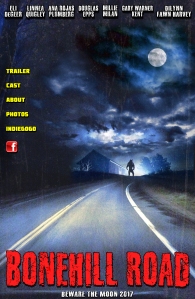 Bonehill Road (Vimeo) – Todd Mother F’N Sheets reaches into the depths of his mind and pulls out this latest project of an old school werewolf film. The film centers on a mother and daughter who are escaping an abusive relationship. On the road to grandpa’s house they meet a creepy dude at a rest stop (which I believe happens to all of us at least once) and believe they just narrowly missed hitting a bear? Shortly after the narrow miss a tire blows out and they hit a tree. The women take a few to get their senses and try to figure out what they should do but that so-called bear comes back to haunt them or I should say werewolf. On the run the ladies find a house but their luck is worse than they think when creepy dude from rest stop is the owner and has his own serial killer thing going on. These women have already been battle tested and know what is outside is worse than inside. Once the madman is dispatched in a rather gruesome manner its back to figuring out how to fight off these werewolves who are trying to break their way into the home. I absolutely enjoyed this werewolf flick. I would compare to Todd’s film to another werewolf flick “Wolfen” or “Bad Moon”. Mr. Sheets went for a more story driven werewolf flick and when it pays off it more than pays off with a scene in the kitchen. While a woman recently bitten transforms another not one but two werewolves shot in 100% light wander into the kitchen and it is a beautiful thing. Most independent werewolf films have to hide their monster. Hell most mainstream flicks do the same but Todd Sheets made sure you got the money shot and more with this scene. Todd absolutely delivered on a giving horror fans an entertaining treat of a werewolf film. And yes horror fans the film is a little slow but again the film is more story driven than gore driven but you will get your blood, guts, and cannibalism! A couple other cool tidbits to the film are the end credits scene with fake Gene Simmons again and they have a “stunt werewolf” thanks to Mr. Steele. Todd Mother F’N Sheets did again and I think fans will be pleased with his old school werewolf flick as I give it 3 ½ out of 4 stars.

Fistful of Undead (Vimeo) – A short film from Todd Mother F’N Sheets that is about a cowboy fighting the undead. No dialogue, zombies, a bad ass cowboy… sometimes it is just that simple as I give it 3 out of 4 stars.

Knock Knock (On Demand) – No folks this isn’t that terrible Keanu Reeves movie we all lured into watching last year. This film is something much better! 2012 “Dorm of the Dead’s” Toby Canto makes his return back to the independent horror genre with this great gem. A story of misfits living in an apartment complex. An old boxer named “Stonefist” Sam is turning 60 today. Not the most pleasant person returns home to his weirdo neighbor Oliva hanging out in his apartment complaining about a vampire living across the hall. She can’t make her mind up if its Dracula or just a hot vampire living next door as she has been watching him worried he will kill her. As Sam tries to calm her down another weirdo neighbor Dragon busts in with his bag of goodies to kill the vampire and blurts out this great quote “Fucking Draculas Bro”! He also has stories of Dracula living next door including ripping his “Missing in Action” poster off of his front door. Once Gretchen stops by the scene is set as Oliva stole a package that was left for the vampire. As the four argue the vamp knocks on Sam’s door to nicely get the package but that goes horribly wrong when he was already invited to an apartment complex party. Sam doesn’t believe the neighbor is a vamp until the vamp tries to bring hell down on the four and Sam shows why he was nicknamed “Stonefist”. After they beaten the vamp down and tie him up they warn him to just be a good neighbor or leave? The credits role and we all find out the vamp has friends as a war takes place in the apartment. Smart production, hilarious script and characters, and the actors were down right fucking awesome and perfect for these parts! This flick had me laughing my balls off the whole time watching it. Toby I hope all of us horror fans get to see more projects from you as this is one of the best independent horror projects I have seen in 2017. I give this flick 3 ½ out of 4 stars. Check out Pop Art Pictures Facebook page for more details on the film.

Brides of Dracula (DVD) – Peter Cushing as Van Helsing returns to Transylvania to kick some vampire ass. A vamp is turning the village’s beautiful women into his brides and Van Helsing refuses to allow this crap to go down. A great buildup ending in this movie as the vampire believes he has killed Van Helsing by biting him but Van Helsing cures himself in a cool legendary manner. I give the flick 3 stars.

Never Knock (SyFy Channel/DVD) – To set the scene it is Halloween 1986 and some kids go up to 59 Oakwood Lane to knock on the door of a supposedly haunted house. A kid’s hand begins to bleed on the door of the home and a dark force opens the door and kills the kids. But also when police officers arrive on scene they find “Never Never Knock” carved into the one body. So over the next thirty years kids in the small neighborhood go up and knock on the door every Halloween to scare each other. Meanwhile the murders go unsolved and become a thing of legend. Present day Jenna and friends go to the house and little sister Jenna knocks on the door, creature appears, and Jenna disappears. The friends look for Jenna as this sinister creature connected to this door of the home makes the friends see things that are not there until it kills them. Wasn’t overly impressed with the flick and left me asking why didn’t the city or neighborhood destroy this house to rid the town of the memories? Or who was taking care of this place for thirty years? I believe these questions would have made this a much shorter and more watchable movie for all of us as I give it 1 star.

Stickman (SyFy Channel/DVD) – A girl’s night terror or nightmare comes to life and kills and eventually sends her to an asylum for troubled kids. She spends several years there trying to get over this issue as her sister and mother were plagued by this issue after her sister read a poem about the “Stickman”. She is now about to turn 18 and has made it to a halfway house but her night terror has come back and is out in real world killing everyone. She must break into the asylum to find answers. The concept of the film is interesting but feels like it wasn’t completely executed properly? This flick was a little more bearable than some of the other recent SyFy Channel Halloween flicks as I give it 2 stars.

Jeeper Creepers 3 (On Demand) – Holy fart knocker did yinz screw this shit up! Okay folks never mind the creeper behind the camera directing the film let’s just talk this horrible film. This sequel is everything you didn’t want to be. Now, I was never a huge fan of this series but found the demonic creature “The Creeper” interesting. Apparently this takes place in between films one and two and people are out in force hunting this creature before he goes back to sleep. Wait… wait… wait… What? Where in the fuck is Ray Wise’s character fuckheads! Anyway, now the Creeper is able to hunt during the day, killing at will. The creeper also kidnaps a young teenager and his truck is impervious to everything and oh yeah it now has “Boobie traps”! The movie seems incoherent at times like Tim Gross and Daniel Boyd were drunk and wandered on set and started filming. But seriously folks I love character actors such as Stan Shaw, Meg Foster, and Gina Philips, but guys yinz should have sat this project out. I believe the biggest issue for me but all horror fans especially fans of this series is there was so much you could have done with this character? This character oozes a franchise and several years later we get this crap. Let’s call this what it is “CRAP”. I see crap and I give it crap so if you haven’t seen it yet? Don’t and thank me later.

Wake Up (YouTube) – A pretty different and maybe artsy short film that deals with a man who keeps writing “Awake or Alive”. The man is going insane or already there and not totally sure what is real? Cool stuff from Running Director Productions can be found at www.facebook.com/RunningDirectorProductions as I give this 2 ½ out of 4 stars.

StatACHE (YouTube) – A quite bizarre short film where a strange man with a bag on his head has a relationship with his television. A short film that mess with your mind thinking about it as I give it 3 out of 4 stars and more about it can be found at www.facebook.com/RunningDirectorProductions .

The Last Room (YouTube) – A short film more up my alley as the apocalypse has happened and a man is trying to tell the story before he goes completely bonkers! First, people’s minds went, and then people were offering themselves to the flames or mass suicide I am guessing. Then all the utilities went! Now, Kameron haunted by his own visions after cannibalism wants there to be a record of what happened to humanity. Dark, deep thinking, rough… would like to see this fleshed out more as I give 3 out of 4 stars and more about it can be found at www.facebook.com/RunningDirectorProductions .