Snakeman (DVD) – A mid-2000s film also known as ‘Snake King’ stars Stephen Baldwin as a helicopter pilot and concern citizen of the Amazon jungle. Baldwin’s character helps fly an anthropologist and a few greedy scientists into the jungle looking for an Amazon tribe that may hold the answer to the “Fountain of Youth”? While venturing further into the jungle a snake is tracking them and feeding on them one by one. But once they find the tribe they find out the snake is the “Fountain of Youth” and has to choose you… Another fun CGI snake flick that I give 1 ½ stars too. 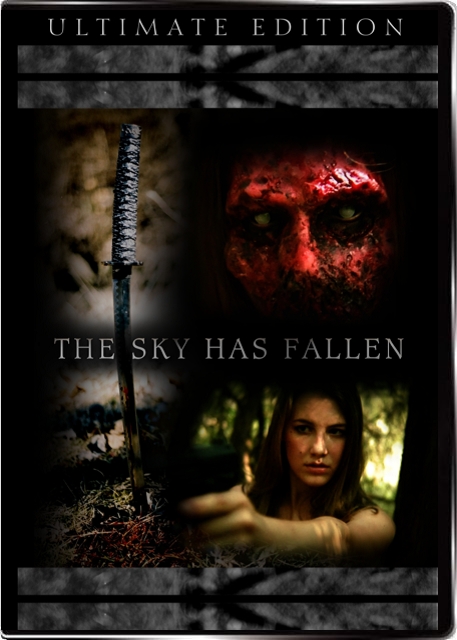 The Sky Has Fallen (Vimeo/DVD) – A very dramatic independent zombie flick from filmmaker Doug Roos who tries a different approach to the bloated genre. The film centers around two survivors of a deadly virus that in the matter of hours either killed or zombified mankind. What makes this film unique is Lance and Rachel (the survivors) can deal with the zombies but it’s the dark shadowed figures that show up with the zombies that are the mystery. Lance searches the woods for days believing if he can find the source of the dark shadowed figures the zombie apocalypse can be stopped? As they travel deeper in the woods us the viewer learn that these shadowed figures kidnap the recently deceased and do experiments with them. And that the dark shadowed figures may be mutations? Kudos to Mr. Roos for coming up with a very unique but dramatic zombie flick that I give 2 ½ out of 4 stars. For more info or to purchase it: www.theskyhasfallen.com or www.kunaki.com/sales.asp?PID=PX00ZJ30QU&pp=1 .

#FollowFriday (DVD/SyFy Channel) – I have been waiting for this kind of film to pop up. Yeah there is ‘Smiley’ and ‘Unfriended’ just to name two but this is a little different. A killer uses Twitter to pick his victims, well popular Twitter people, or ones that have the most followers on college campus. Any popular person gets “#FollowFriday” on their twitter page they die. The reason I have been waiting for this kind of film is it really dives in with the internet trolls, stalkers, trash, and the kids who are living or dying on social media. It’s a great concept that I believe hasn’t seen its peak in the horror genre just yet? I give the flick 2 ½ stars.

Revenge of the Zombies (DVD) – A wonderful black and white classic horror film that stars John Carradine who controls zombies in the swamps. The zombies or corpses are experiments for Carradine’s character who is trying to build the perfect army. When he kills his wife he believes he has the answer to the perfect soldier until her brother and friends coming snooping around. I give the film 3 stars.

Steel and Lace (VHS) – A millionaire gets off of rape charges and Bruce Davison’s sister jumps off a building to her death not able to cope with the decision. Five years go by and Davison the scientist he is turns his sister into a cyborg seeking revenge on the five men that wronged her. Meanwhile a cop and an artist working on a new book uncover Davison’s plan of seeking revenge. Think a lower budgeted but much gorier version of ‘Eve of Destruction’. But don’t let lower budget stop you from enjoying this direct-to-video release as it stars Bruce Davison, David Naughton, Claire Wren, John J. York, and Brian Backer! A horror gem well worth the effort of tracking down as there is no legit DVD release of the film at this time. I give it 3 stars.

Sasquatch: The Legend of Bigfoot (DVD-R) – A film made in 1975 but not released until 1977 is a documentary-style film about Chuck Evans leading a research team deep in the British Columbia Mountains looking for Sasquatch. After several sightings of Bigfoot in the 50s and early 60s money was raised to send a research team was put together to find, tag, and release Sasquatch. The project came together quickly after the amateur shot film footage of Bigfoot. The seven person team enjoys the wildlife and untouched nature until they wondered into Bigfoot territory and the Sasquatch kicked the humans’ ass. The film can be boring but has its place in the Sasquatch genre like ‘Legend of Boggy Creek’. And with many new Bigfoot films and renewed interest in Sasquatch I would not be surprise this slightly unknown flick finds a way onto the DVD format sooner than later as I give it 1 ½ stars.