Night Shift (DVD) – Henry Winkler and Michael Keaton work at the city morgue in this comedy classic about two guys that become pimps. Keaton is the idea man and Winkler is the money guy who even gets the hookers healthcare, 401K, and not beat up until two guys who were cutting in on the action on the last pimp they killed finds out about the city morgue. Great stuff as I give 3 stars.

The Salton Sea (DVD) – Val Kilmer stars in this film about two different characters but they are both the same person. Kilmer sees his wife die in a horrible hotel drug bust gone bad while using the bathroom. He becomes another person for over a year and becomes addicted to drugs to find the people who killed her. The film is very weird, odd, interesting, and Vincent D’Onofrio a big time drug dealer who got his nose removed because he did too much “gunk”! Kilmer is brilliant and this is the type of film for you if you are looking for something “off the wall”? I give the film 2 ½ stars.

The Conjuring (DVD) – James Wan must have been a little tired of the “Paranormal Activity” flicks and reached in his bag of tricks to pull out this 70sish haunted house/ghost flick. Violent, creepy, and based on a true story of a paranormal team named the “Warrens” who apparently were recognized by the Catholic Church and try to help people in the 60s and 70s with their paranormal issues. This story just happen to be the one they did not like talking about for many years as it also haunted them deeply because of the evil they faced. The Warrens come across a family who have become afflicted or cursed by a woman/witch who hung herself declared her soul to Satan many years ago and fucked up shit has happened to people who have lived at the house or near it on a regular basis. So if you are old like me and enjoyed the original “Amityville Horror”? This is right up your alley folks as I give it 3 stars.

Zodiac: Signs of the Apocalypse (DVD/SyFy Channel) – Aaron Douglas and many other no names star in this end of the world SyFy Channel flick that is based on the astrological signs and how they coincide with a planet that orbits the sun differently than the other planets we know about. If that doesn’t grab ya, Christopher Lloyd appears in the flick long enough to make you feel you haven’t totally wasted your time watching it. I give the film 1 ½ stars. If bored and a little psychotic like yours truly look for the scene with about 15 minutes left in the film when someone fucked up editing and a Ford Flex racing from a helicopter changes into a Chevy Tahoe and then back to the Ford Flex.

The Expendables 3 (Theater) – How to put this simply but this third film showed that “The Expendables” franchise  does have a shelf life and its right at its sell by date. Love the first two films and cannot bad mouth Stallone for trying to give fans something different. But this film centers more on The Expendables team trying to get younger instead of more on the older action stars we all know and love. Mel Gibson plays a great asshole villain and once the film gets past trying to establish the younger people into the film all hell breaks loose for the last 30 minutes to give you one big action orgasm! Will there be a fourth, I doubt it but that doesn’t mean you should write this sequel off as I give it 3 stars and thank you Antonio Banderas for being awesome…

Cabin Fever 3: Patient Zero (On Demand) – This flick centers around the fat hobbit (Sean Astin) being immune to the flesh eating disease that has scientists baffled and have shut themselves up in a building basement on an island after fat hobbit tries to infect them. This is the type of film that makes me and other horror fans question: Why is there another sequel? How is this a “Cabin Fever” movie? And so on and so on. The movie blows donkey ass but what saves the film is there is just some wicked ass gore effects that need to be seen and seen often! I give the film 1 star but the gore effects 3 ½ stars.

Chiller (VHS) – Here’s a TV movie directed by Wes Craven in the early 80s that starred Michael Beck and Jill Schoelen in a flick that will make you think twice about cryogenics. Being frozen for later use was the entire craze in the late 70s and through the 80s and this film poses as a warning if your cryo-tube begins to malfunction, they thaw you out and apparently you no longer have a soul? The dated film is still fun to watch as I give it 2 stars.

Zombie Undead (DVD) – A higher end independent zombie film from the UK about someone explodes a dirty bomb in the heart of the city and people become zombies and trapping several people in a nearby hospital (where 85% of the film takes place). The several people of course must stay together to survive or they become munchies for the UK deadheads that roam the halls of the hospital! I give it 1 ½ stars. 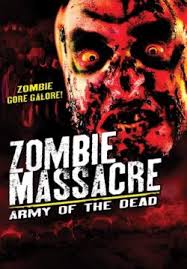 Zombie Massacre: Army of the Dead (DVD) – A higher end independent film from Maryland starring Jim Krut as one fucked up privately funded government dude who wants to perform an experiment on a whole town to see if they are able to make the perfect soldier and control it. Problem the town and anyone outside the town knows nothing about it as a couple of college kids stuck in a movie theater may throw off the whole experiment? It has running zombies, slow zombies, and bloodless zombies, next time do some rewrites as it appears you have the budget and the resources to pull off a better product as I give it 1 ½ stars. Wanna see more about the film or other projects the filmmaker behind “Zombie Massacre” has done or will do go check out www.chemicalburn.org . And if you already guessed it: “yes, I bought the film for the mere reason it had massacre in the title.”

Thriller: A Cruel Picture (DVD) – The 1973 film is also widely known as “They Call Her One Eye” and has been inspiration for many filmmakers the past decade but can’t be duplicated. A woman who is raped as a young girl is now grown but is mute and goes into town quite often for doctor’s appointments. Innocent and naïve she gets in a car when she misses a bus into town and wakes up beaten up and hooked on heroin and told she will now be a hooker! Not happy with this she takes it out on her first customer and in return she loses an eye and apparently it costs more money to bang a one eyed hooker. Soon she saves her money learns how to race a car, shoot guns, and fight. And that is when this movie just gets downright brutal as she begins gut shooting customers left and right in slow motion with a double barrel shotgun. The movie is absolutely amazing, fucked up, brutal, and not for all movie lovers at the same time. I can see now why this film has such rabid fan base especially when your female lead doesn’t say a damn word through the whole film! I give it 4 stars.

Plus you can always go to the greatest T-shirt place online or if you are in Texas visit the store of “Fast Custom Shirts” where T-shirt Joe is the only place that you can purchase a Gross Movie Reviews and Jagoff Massacre t-shirt but also Cannibal Campout, Woodchipper Massacre, and a Spookies T-shirts also!!!! Go to www.fastcustomshirts.com for details.