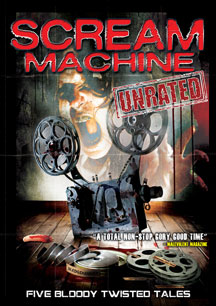 Mesa, AZ – 2015 – Just when you thought it was safe to relax and let out your breath, the evil genius of Scarlet Fry (Walter Ruether III) makes itself known once more in the shape of Scream Machine’s five bloody twisted tales: “Sledgehammer,” “Cannibal Pen Pals,” “April Fool’s Party,” “Septic Shock,” and “Deadly Indie Drive-In.” Each one featuring the three M’s of horror: madness, murder, and mayhem; guaranteed to make you faint, puke, and quite possibly soil your pants!

PLEASE NOTE: Filmmakers are not responsible for spontaneous heart attack or combustion from fright!