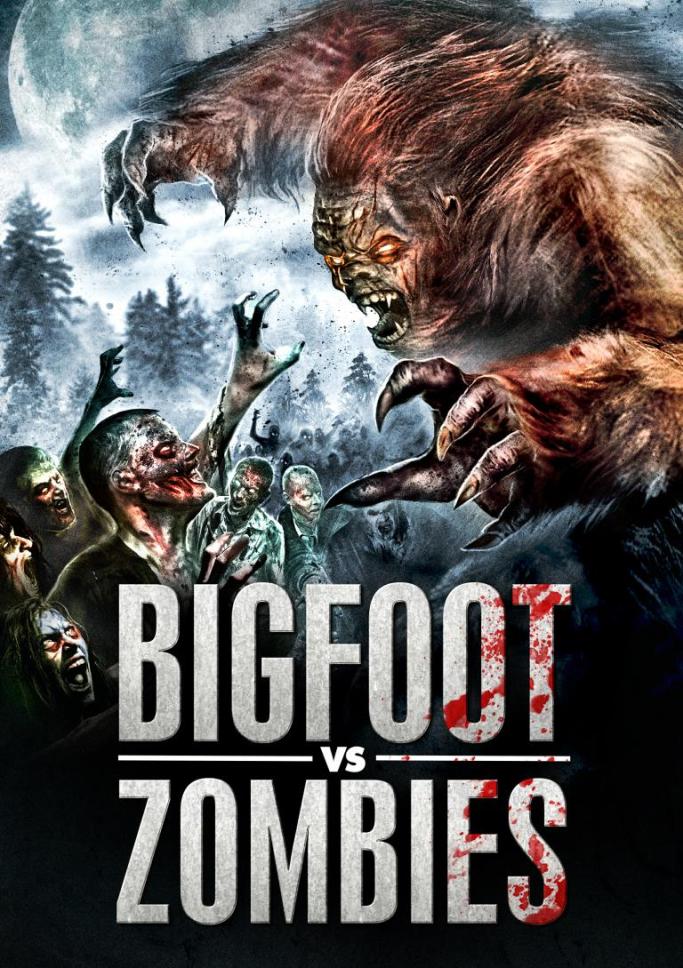 Bigfoot vs. Zombies (DVD) – Come on people the title says it all right? And you gotta love Mark Polonia is working non-stop in bringing us great films such as this lovely gem. Also if I have seen correctly there was an Anthony Polonia working on effects with Brett Piper for the film? But anyway something hokey is going on down at the Wyoming County Body Farm. The bodies are supposed to be for forensic school for cadets but a certain scientist has been performing experiments. Not only is he checking out how the corpses decompose he is seeing if he can make them decompose faster to make more money? This soon goes in full effect when a barrel is dumped on the property and the dead begin to rise. Meanwhile our old friend Bigfoot is watching from afar and finds himself in the gated military complex (it has two guards at the most). Now zombies are attacking the complex and the scientists and Bigfoot is pissed and begins smashing zombie skulls to help people escape into the woods. In the end Bigfoot is a zombie stomping bad ass in this wonderful entertaining entry into the Bigfoot genre. Thank you again Mr. Polonia for your work as I give your film 3 ½ out of 4 stars.

Hotel Transylvania 2 (DVD) – The whole gang is back for this animated feature about old school monsters trying to adjust that Drac’s daughter fell in love with a human. A few years have passed, a wedding has happened, and now Drac is a grandpa. One problem the child hasn’t turned into a monster? If he doesn’t get his vamp teeth by 5 years old he will be human. So it’s up to Dracula, Wolf Man, The Glob, Frankenstein, the Mummy, and The Invisible Man to help show the kid how they got to be a monster. The film has some funny stuff but not as nearly laugh out loud as the first film. But will give them credit for casting Mel Brooks as Drac’s father which was a big highlight and reason to watch the film. I give the animated feature 2 ½ stars.

The Wild Bunch (DVD) – I finally can scratch another brutal western that came out of the “spaghetti westerns era of the 60s” off my list of must watch. Some older outlaws looking for that supposedly last big robbery as they get tricked into robbing a bank for some iron washers that thought was money. Instead get trapped in a huge shootout where several of them and the townsfolk get shot down in the streets. William Holden and Ernest Borgnine come up with a plan to visit a Mexican general and talk to him about a heist of US guns for gold in return. The plan goes off great until a partner of theirs is kept behind because he was trying to help his people with a case of guns. The aging outlaws come back to visit the Mexican general and have one of the bloodiest stunt filled scenes cinema history. It was glorious! It is weird because I didn’t enjoy the film as much as I thought until I got to that scene and it made it well worth watching. Hard to explain but bottom line I guess I will always be that person that will always prefer ‘The Good, The Bad, and The Ugly’. Anyway if you haven’t seen this movie make it a point you do in your lifetime for the last 30 minutes of the film. You owe yourself to see cinematic history as I give the film 2 ½ stars.

Iron Man: Rise of Technovore (DVD) – A full length film that is part of the ‘Iron Man’ series that plays on the Disney XD channel where Iron Man is caught off guard when a teenager with symbiotic technology shows up and almost kills War Machine. With a little help from the Punisher, Iron Man gets to the bottom of the problem and has to stop the kid and his new tech from taking over the world. The newer series is okay but I lost interest very quickly as they went away from those Marvel Universe animated films from Lionsgate from a few years back. Iron Man series is directed to more of the Anime style which I believe limits who will actually give the series and the newer films a chance? But that can be debated at another time as I give this film 2 stars.

Ant-Man (DVD) – Well Paul Rudd and Michael Douglas yinz surprised me. I was expecting a shit show but this cheesy superhero film was quite entertaining entry into the Marvel/Disney universe. A thief (Paul Rudd) gets out of jail and wants to be legit for his daughter. But times become tough when he keeps getting fired for having a criminal record. He leans on his friends about this possible job where an old man has a safe with lots of money in it is going away for a week. They go to rob the place only to find an old motorcycle suit and helmet. Rudd’s character takes it anyhow and soon finds out he can shrink to ant size. Michael Douglas talks to him and gets him to come back to his house and explains that he can be the next “Ant-Man”? Especially now his old protégé is about to unleash a project called “Yellowjacket”. The film has enough cheese, interesting characters, and gives all the characters they introduce equal time that makes it quite entertaining. I thought the movie was going to be one big elephant turd but they proved me wrong as I give the film 3 stars.

All Cheerleaders Die (DVD) – An under the radar horror film about teenage angst and superiority when during a party in the woods an ex-boyfriend (who also happens to be the big football star) shows up and slaps his girl around. All the girls freak out and drive off, the boys chase them down until they are run off the road into a creek and died. Except the recent local outcast who just happens to be a witch and was sort of girlfriends with one of the cheerleaders brings them back to life. They awaken next morning and all they are concerned with is looking good for the first day of school. But soon know they need to feed to keep up strength and anytime one does they all feel it. Soon they kill the boys that wronged them one by one but more by accident more than anything. An odd supernatural horror film that isn’t your usual horror fare that is different enough made me glad I took the time to check it out. I got give it 2 ½ stars.

Meteor (DVD) – Sean Connery and Brian Keith are two experts respectively for their two countries space programs. They are brought in by NASA when a comet smashes into the asteroid field in space and sends shards of rock hurling towards earth causing disasters. But the biggest has yet to come when a 5-mile wide meteor is on a path to collide with Earth and end our existence. The US, Sean Connery and the Russian, Brian Keith must come up with a plan to stop or blow up the meteor. But in theory they must admit both countries have doomsday missiles aimed at each other’s countries which could be used to stop the meteor threat. A pretty cool disaster film from 1979 that was considered a failure at the box office but the studio spent millions on disaster effects. Including the mud scene where mud is flooding the subway. The 70s disaster film genre has tried to be rebooted several times over the years but didn’t have the impact it did during the 70s. Great film as I give it 3 stars.

Squirm (DVD) – This classic Jeff Lieberman film had the pleasure of being played on TBS in its heyday of cable around the clock with such films ‘Beastmaster’, ‘Frogs’, ‘Day of the Animals’, and usually after an Atlanta Braves game. Its fall of 1975 and a bad storm have hit a small Georgia community knocking out power and phones. But the down electrical lines are still running power into the ground and causing a ground swell of angry, roaring, man-eating worms! Now worms are just oozing out of everything eating humans! The movie is 40 years old and still a fun watch but also just found the DVD/Blu-ray format recently as I give the film 3 stars.

Truck Turner (DVD) – Holy shit this is an amazing cast for a film: Issac Hayes, Yaphet Kotto, Nichelle Nichols, Dick Miller, Charles Cyphers, and Scatman Crothers just to name a few for this Blaxploitation flick. Issac Hayes is a bounty hunter/skip tracer who makes a good buck tracking people down. But after tracking down a notorious pimp named Gator who jumped bail and killing him, he is on a hit list. Gator’s girlfriend wants revenge or should I say “a bucket of blood”. And she is willing to hire whoever or do whatever it takes for someone to kill Truck Turner. Great stunts, great supporting cast, and a shitload of fun! Issac isn’t the best leading man but there are enough characters in the film that makes it a well worth effort on his part. I give the film 3 stars.