Devilution (YouTube) – Zane Hershberger’s 2012 short film that has a way awesome intro inspired by 1988’s “Night of the Demons”. With that in mind the premise of the film is about a couple young ladies who wanna get in the Halloween spirit while hanging at home. They have a séance and some other games of trying to communicate with people from the past. Things seem tame until one of the girls is placed in a trance and something evil has awakened. It’s like a lost sequel to the underrated “Witchhouse” films that were released by Full Moon. This film clearly proves Zane is another name in independent filmmaking that will not disappoint as I give the short film 3 out of 4 stars.

Amusement (DVD) – A rather under the radar killer clown flick from 2008 that involves three women being stalked and kidnapped in 2008. The kidnapper/man that is stalking is only nicknamed as ‘The Laugh’. Apparently as kids he was friends with all three of the women and the three women picked on him horribly. This had some effect on him as he became a lonely creepy dude who lived in a big old house with lots of time on his hands. So he dresses as a clown to terrorize them and keep them in his rape dungeon so they know what it was like for him? Nothing groundbreaking but enough interesting stuff happens to keep the plot from going stale as I give the film 2 ½ stars.

Puppet Master: Axis Termination (DVD) – Finally, six years later we get the last entry in the ‘Axis’ trilogy. A hard ass military man named Captain Brooks is teamed with a Dr. Ivan and his companions who have special abilities are meant to take down Nazis. The Nazis have a special division that was very interested into magic and occult and believed this would be the answer to take down the U.S.! Captain Brooks and his team of personal with special abilities also use the puppets to gain an advantage in defeating the Nazis for good in this very hokey but bloody entry into the ‘Puppet Master’ universe. The film is not terrible but is nowhere the best of the long running series. I believe if there is one thing to take away from this entry is that Charles Band can do better? “Axis Termination” seemed more just thrown together to end the trilogy than attempt at making another memorable entry into the ‘Puppet Master’ universe. I give this entry 2 stars and honestly hope that Full Moon and Mr. Band begin work on one-offs for this series as there is an audience wanting it? That is if he isn’t trying to do more generic infomercials that are excuses for movies aka “Evil Bong” flicks through indiegogo campaigns…

Killing Gunther (DVD) – A weird, hilarious, and fun action comedy starring Arnold Schwarzenegger as the best paid assassin ever. But a hitman gets the idea of getting a team together and a small film crew to film them “Killing Gunther” to prove they are better. As they fumble their way through the film trying to kill him it becomes every reality TV show wrapped into one movie… with assassins. Arnold doesn’t really appear until about ¾’s of the way in but well worth the watch for his appearance and the climax of the film as I give it 3 stars.

Nazis at the Center of the Earth (DVD) – A couple researchers stumble upon a Nazi ship of some kind under the ice in Antarctica. They disappear and word of their disappearance gets back to their lab partners who set out to look for them. Soon the research scientists trip across a tunnel that leads them into the center of the earth where the world has been flipped upside down. Jungles and extinct creatures all around them, a world that was only a theory among scholars. They find a building that has not only their friends but is full of Nazis still experimenting with flesh. They need fresh flesh to keep their decaying bodies going. Some crazy scientist that was Hitler’s right hand man has found a secret to keep them alive. Soon the researchers become part of the experiments to help bring back Hitler so they can launch their warship to take over the world again! Jake Busey, Dominque Swain, Asylum Entertainment, and Nazi experiments always makes me give a movie a chance and glad I did as I give it 2 stars. 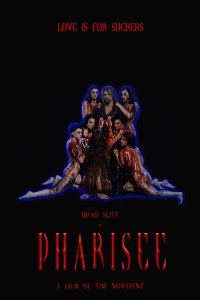 Pharisee (Vimeo) – Independent filmmaker Tim Novotny has a new feature hitting the streets that is a very dark, long bloody tale of vampirism. The film begins with a detective grilling a woman named Zoe about what really happened with all the murders around the city. She claims to understand, “You have to start at the beginning.” A gang of punks looking for trouble on the bad side of town reciting lines from “The Lost Boys” meet a dark figure named ‘Pharisee’ who just rips them to pieces for their blood. Pharisee stays under the police radar by killing and feasting working girls and strippers. While ripping throats out he meets Zoe, a girl like him who is a broken person and introduces her to his brutal world. But there is one difference between Zoe and Pharisee and that is Pharisee is haunted by a past he cannot get away from. With Zoe becoming a part of Pharisee’s world and Pharisee destroying all the strippers and hookers a mob boss puts a hit out on him which can only end super bloody. The movie is amazingly dark and has no happy place or comedy and thrives on Pharisee’s outlook of the world.  This vampire flick is a down and dirty horror flick about death. I enjoyed the wonderful gritty vampire tale but if I have to complain about something it would be its near two hour running time that does drag a little in the middle of the film. In saying that Mr. Novotny makes sure you will have enough sex and violence to satisfy two movies as I give it 3 out of 4 stars. For more details go check out:   www.facebook.com/NovotarianSyndicate .

Victor Crowley (Blu-ray) – The fourth entry into the “Hatchet” series has Victor Crowley returning to his roots in the swamp to begin killing again. This mishap begins when Andrew Yong after a decade since the horror he faced he writes a book about “The Bayou Butcher” and goes on tour. Meanwhile a filmmaker who is also a huge fan of Mr. Yong’s wants to get him to do a cameo in her fake trailer about Crowley? Before she really has a chance to ask Andrew is pulled away for a big deal to go back to the swamp for a network special. The plane goes down in the swamp and the filmmaker and crew while there try to help the survivors. While doing that they forgot they left YouTube on trying to learn part of the script that has someone reciting the voodoo ritual to bring Crowley back. Once the right person aka Tony Todd shows up saying the ritual and Crowley is back from the dead on a killing spree again. I really enjoyed this entry as it seemed to keep it simple and keep it very bloody but also hit all the right slasher film cues as I give it 3 ½ stars.

The Misplaced (Vimeo) – A four minute short film about a couple who argue over things going missing in their house with no answers. Then Andrea sits down to eat ice cream and notices her phone is missing until she looks behind her. The short film is interesting but would have enjoyed a little more building of who or what was behind her and why? Wouldn’t be surprised that it is investment short film for the bigger project of it? I give the short film 2 ½ out 4 stars.

Post-Apocalyptic Desolation (Vimeo) – The latest independent short film from Alex Wesley where a soldier is part of a time traveling experiment. He ends up in the future, October 2199 where all he is finding is death and destruction. The soldier continues to explore and record everything he does in hopes of someone finding the record he has left behind. Days pass as he keeps exploring only to be trapped by some kind of half monster and half machine that kills the soldier. Then takes him back to the secret lab, rebuild him, and the new cyborg monster is part of a first person shooter game like “Doom”. The film was very entertaining and feels like if Todd Sheets became a gamer in the early 90s and decided to make an alternate version of “Zombie Bloodbath” in Russia? What helps make this post-apocalyptic film work is the location as every zombie film should be filmed there or at least the next “Outpost” flick set in the future as I give the flick 3 out of 4 stars. But anytime someone starts their movie title with “Post-Apocalyptic”, I am in!