May 27, 2015 – Akron, Ohio: Tempe Video today announced the immediate launch of an Indiegogo crowdfunding campaign to support preorders for a 3-Disc “Ultimate Edition” Blu-ray of the 1990 landmark independent shocker “The Dead Next Door,” the boutique cult label’s first HD release.

Two and a half decades before “The Walking Dead” made zombies mainstream on cable television, 19-year-old writer/director J.R. Bookwalter (“Ozone,” “Witchouse 2: Blood Coven”) embarked on “The Dead Next Door,” an ambitious Super-8mm horror feature pitting an elite team of Zombie Squad soldiers against hoards of the undead and the secretive religious cult hell-bent on protecting them. The film would ultimately take four years to complete with the help of a now-famous Hollywood director and more than 1,500 Northeast Ohio residents, who portrayed the multitudes of bloodthirsty ghouls.

For this one-of-a-kind release, Tempe has assembled four unrated versions of the film, two created from a brand-new 2K restoration using the original film elements. To celebrate the 25th anniversary of the film’s original home video debut this fall, collectors and fans will now be able to enjoy the movie in 1080p HD in either 4:3 original aspect ratio or 16:9 cropped alongside the standard-definition masters used for previous VHS and DVD releases, together with all of the extras from with those versions.

Featuring Blu-ray, DVD, and soundtrack CD discs, “The Dead Next Door” Ultimate Edition also adds a number of all-new bonus features, including a look at the extensive restoration, and a 5.1 surround mix which resurrects the voices of the original actors recorded on location for the very first time as an alternate audio track alongside the dubbed mix fans already know.

The release is capped off with reversible artwork and a full-color booklet including behind-the-scenes photos and comprehensive liner notes. The set is available with a variety of optional perks including reversible theatrical-sized poster, a book containing all six drafts of the original screenplay, and a VHX Digital HD copy which can be streamed to web browsers or Apple, Roku, and Chromecast devices.

Only 1,000 units of “The Dead Next Door” Ultimate Edition Blu-ray will be offered during the 30-day campaign, with a single-disc retail edition planned for a later date. Preorders are estimated to ship in October, with a limited theatrical release for the new 16:9 version also in the works. 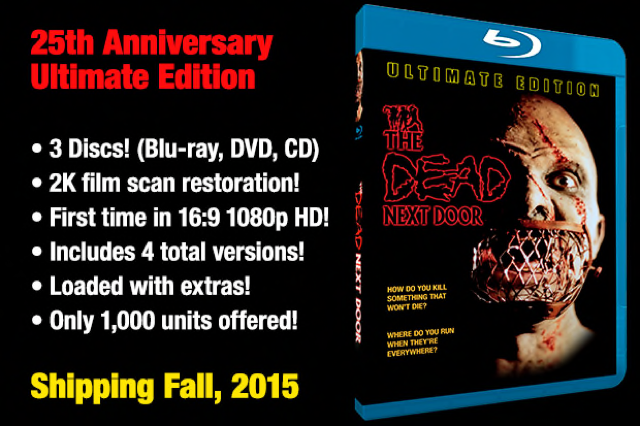