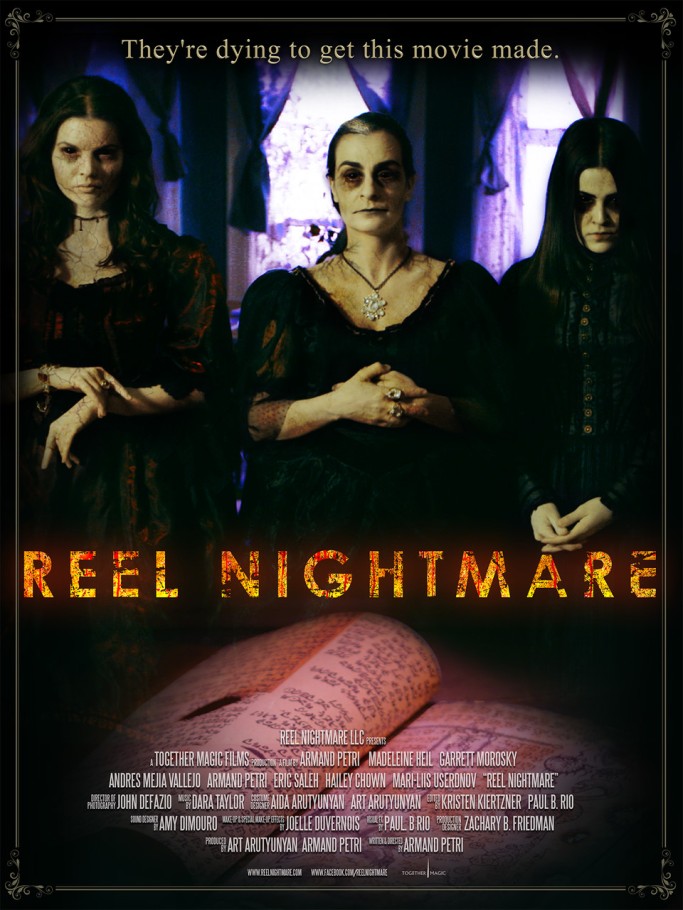 The film exists in a contemporary interpretation of the H.P. Lovecraft universe, with the New England-set story centered around the discovery of a Necronomicon inside a Victorian house cursed by three body snatching witches; and the main characters depicted as students from the film school at the fictional Miskatonic University.

“An ambitious female director and her crew pick a remote Victorian house with a dark history as their shooting location, only to discover the mystical place is haunted by the spirits of three vengeful witches.”

Written, directed and co-starring Armand Petri, Reel Nightmare was produced by Art Arutyunyan in their feature film debut. Petri describes the film as: “A paranormal found-footage hybrid where the characters record the supernatural forces threatening them… until it’s logical to keep filming them. When the movie hits that point, Reel Nightmare switches to a traditional narrative style.”

“The film is a fun ride that will appeal to fans of traditional horror and to those who crave an extra dosage of wit and humor in their scary movies. It features a fantastic location, an intriguing ghost story with three creepy (yet seductive) witches causing chaos, and a charismatic cast.” – adds Arutyunyan.

Reel Nightmare is currently in post-production and seeking distribution. A sequel, also written by Petri, is in development.

About Together Magic Films