(The last batch of reviews that go into the next book)

Da Sweet Blood of Jesus (DVD) – A Spike Lee film which you know is going to be long… And the way we go as an anthropologist who has studied African culture all his life has discovered an artifact that was believed to be cursed. But also there are stories of this knife/dagger/artifact to be used in bloodletting and surgeries a thousand years before it was being documented. Supposedly this started the “blood wars” in Africa as a queen who was sick was given blood and from then on she thirst for it. Many people and tribes died. Now trying to stop a colleague from committing suicide the famous anthropologist is stabbed and killed by the ancient knife. Wakes up next morning back to life and thirsting for blood. He licks his colleague’s blood up and changes not into a vampire or a ghoul but undead who must drink blood to sustain life. He fights with himself if it is right or wrong to live forever even if he has finally found a bride. It is a very dramatic horror film if there is such a thing and has that vampire feel but it isn’t a vamp film. I can say it isn’t your usual horror genre stuff that you are used too. A lot of talking, a lot of blood, and the film is long so take it for what it is? That category for whenever you want to something a little unusual or off the beaten path horror film wise as I give it 2 stars.

High School Hellcats (DVD) – A late 50s drive-in gem about the new girl in school Joyce trying to fit in. Well she is approached by the “Hellcats” and put through an initiation tests. Before she knows it she knows Joyce is in with the wrong crowd when during a party one night the leader of the “Hellcats” is pushed down a flight of stairs and dies. Now Joyce fights with herself to tell the truth the cops or keep her mouth shut like the others. Fun stuff as I give it 3 stars.

Ghost of Drag Strip Hollow (DVD) – A year later and just about the same cast as ‘High School Hellcats’ we have another drive-in gem this one involving a teenage car club. And the car club is about to be evicted as they are about to be recognized in a national car club. So with no other option they take over a supposedly haunted house that has a monster roaming the hallways. They stay overnight like the Scooby-Doo gang to see if it is true and have a party to celebrate. Hilarious late 50s drive-in horror that I give 3 stars too.

Solarbabies (DVD) – A fantastic oddball sci-fi film from 1986 that if you are old like I remember watching on Saturday mornings on HBO? A little of Mad Max, Rollerball, a little roller skating, a little apocalypse, and an all-star cast before they made it (Jamie Gertz, Jason Patric, Peter Deluise, James LeGros, Bruce Payne, and Sarah Douglas just because). It’s the ‘Year 41’ and only one man controls the entire world’s water supply and has children gathered out of the wastelands to become E-cops for this evil man. But there is a few that dream and jump the walls of the orphanage at night to play a futuristic sport without rules. One night after being chased down by the E-cops, Daniel finds a sphere of light or alien take your pick. And Daniel can hear again after holding the sphere or Bodhi as it is called. He shows it to the rest of the Solarbabies and they don’t know what to make of it but it is telling them things are going to change soon. That Bodhi is going to help make the earth green again. But it is stolen by an Indian who goes into the wastelands and the Solarbabies track him down to get Bodhi. But the E-cops or quickly on their trails because they want the sphere so they can crush it and any hope of a future. The film is a fun look back at childhood films and well worth a watch from time to time as I give it 3 ½ stars.

You Only Die Once (YouTube) – A 29 minute horror/comedy, that is delightful, well-crafted, and an absolutely a bloody good time by filmmaker Amanda B. Goodman. Linda apparently has bad taste in men but that doesn’t stop her and her two best friends from fighting the supernatural. Even if it means being attacked by rabid ferrets! The trio has been through it all but they are having rough times when Linda’s latest ex-boyfriend has become a vampire. To make things worse he has two vamp bitches and wants to break up the trio by adding to his nest. Lots of movie and creature of the night references make this gem go by quickly but the trio overcome their differences and defeats the new vamp or did they? Goodman finds a nice blend of gore and comedy that will have horror fans asking for seconds once they watch ‘You Only Die Once’. I give the film 3 ½ out of 4 stars. Find out more at: www.facebook.com/YouOnlyDieOnce2016/ and AmandaBGoodman.com .

Sharkansas Women’s Prison Massacre (DVD) – One of Jim Wynorski’s latest projects that deals with ancient sharks that have been let loose after a huge amount of fracking is going on near the swamps. On top of that a prison break has just happened and they escape to a home in the middle of the woods where apparently the sharks can still swim on land. The prison break now becomes a tale of survival has the women must find a way to kill the sharks as they chomp on them one by one. First half of the film is great, but second half fizzles as its more dialogue and less shark chomping… And yes we do get a SNL ‘land shark’ reference confirming I am old. I give the flick 2 stars.

Xtinction: Predator X (DVD) – The film has several titles but none of them help this film being any better. But anyhow Mark Sheppard (Crowley on Supernatural) is a doctor who has been fired from his teaching job and has come back to his small swamp town. But he is buying property up and researching what would be the best place for his extinct dinosaur gator. He also has hillbillies grabbing locals to feed the extinct gator he brought back out of extinction. This film scrapes bottom of the barrel for killer CGI mutant animal movies as I give it 1 ½ stars.

Girls Gone Dead (DVD) – A group of college girls go away for the weekend to party but they are being picked off one by one by a robed killer with a war hammer. And a couple of them have horrible exes that stalk so they are not sure who is killing them. With not much plot except boobs to carry the film it becomes a cameo filled picture as most of the cronies from ‘The Howard Stern Show’ show up. Also Jerry “The King” Lawler shows up as the sheriff and a hilarious appearance from Linnea Quigley as a bartender. I give this horrible watch 1 star.

The Devils Door (YouTube/DVD) – Gordy Price is back with another project done on a shoestring budget that deals with a serial killer and the devil. Detective Young is investigating a series of gruesome murders that has him researching the occult. The murders seem to be ritualistic but cannot find any rhyme or reason before he goes down the wormhole of an event called “Devils Door Massacre” in the early 1800s. Things get even stranger for the detective when a man named ‘Sykes’ claims to have seen the man who is the serial killer and has killed him during his tour of duty overseas. The film screams late 80s S.O.V. plot and feel! It’s strange, bloody and truly makes you believe the devil made him do it. The movie felt at times a little confusing but in the end it all made sense and Mr. Price has added another solid independent picture to his resume. I give the flick 2 ½ out of 4 stars and you can rent or purchase the film at: https://chapter11productions.pivotshare.com/media/the-devils-door/46977 .

You Only Die Once tells the tale of 3 childhood best friends and vampire hunters whose friendship is called into question when one of their boyfriends becomes a vamp-bride craving, Count Dracula voice mimicking, messy blood-sucker! It’s Buffy meets Hammer Horror and more in this Amanda B. Goodman horror/comedy short! 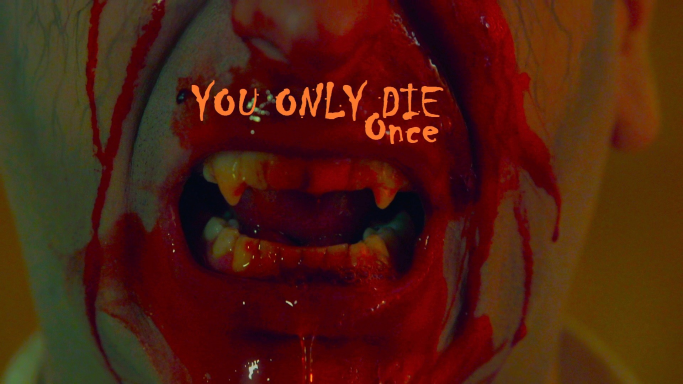