Fifteen” – World’s First Periscope Movie
“Not Watching Might Kill You” 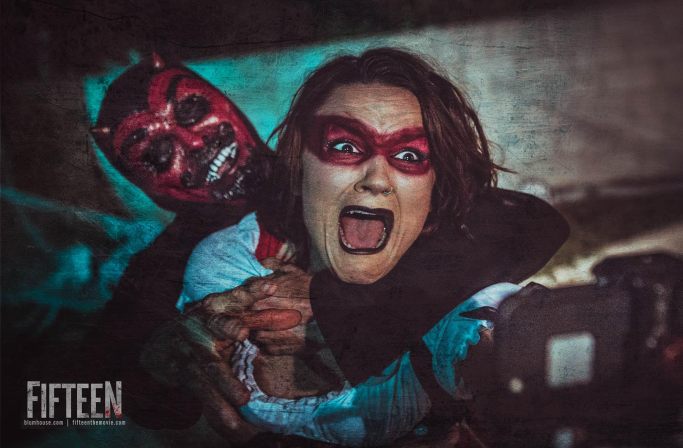 Los Angeles California – October 30th, 2015 – “Fifteen” is the world’s first live horror film. Broadcast using Twitter’s Periscope app’ on October 29th, 2015, the short film had its debut in front of thousands of horror fans. Completely live, the idea for the film was developed by director Michael Gavin Booth (The Scarehouse) and Ryan Turek (Blumhouse Productions). The live film went off without a hitch!  The film starred Neil Napier (“Helix”), Sarah Booth, Hannah Kat Jones, Paula Jean Hixson and Alastair James. Fans of horror can see the film, in its entirety, now on Youtube.

The film takes place on the night of October 29th where two roommates are getting ready for a Halloween party they are hosting. A serial killer, nicknamed “Truman” is broadcasting his bloody exploits to the masses, via the Periscope app’.  Tonight, he’s picked the wrong house to mess with.

The film was developed and rehearsed extensively over the last week. The film included real time stunts and real time special effects, with the actors shooting the film with a smartphone. Gavin Michael Booth says of the shoot and of “Fifteen:”  “We set out to do something fresh, create a world first and here we are on the other side.  For me, I like to do projects that excite me and bring a challenge, I mean, every film has its challenges big and small but working on a project like ‘Fifteen,’ I’m forced to be way outside my comfort zone.  That makes me feel very much alive and the spirit of invention is thriving on a shoot like this.” Fortunately, the film went streamed seamlessly and “Fifteen” can be seen at the link below.

For those that missed “Fifteen” live, you can now watch the film on Youtube: https://youtu.be/Q3vE0xkyl0g

And http://fifteenthemovie.com/ has more about making the film, the cast and crew.