What They Say (Internet) – A short film from director Justin Romine that is about a young lady that seems to only find peace with life through cutting aka slicing yourself in certain areas to relive pain, etc. This young lady feels nothing is going right; no one listens, and is on the verge of wanting to just slice open someone’s neck. The film being a short film finds enough time to explain that her father may be the root of the problem. I give this cool dramatic short film 3 out of 4 stars and you can find out more about the filmmaker at www.fatheadfilms.net .

Down the Old Dirt Road (Internet) – In this Justin Romine short film a young couple’s car has broken down and walks to a farmhouse that just happens to be Leatherface’s cousins or something! If you are a fan of TCM you’ll enjoy this also as I give 3 out of 4 stars. Check out www.fatheadfilms.net for more info.

Dwelling (Internet) – Justin Romine shows us in this short film an affair that goes horribly wrong, like torture, murder kind of wrong… I give it 2 out of 4 stars. Check out for stuff from Mr. Romine at www.fatheadfilms.net .

One Afternoon (Internet) – A quite odd film from Justin Romine that comes off more like a test film or student film than anything as a man named Tommy likes a girl but decides it’s time to move on and leaves it up to you to decide what actually happened? I give the short film 1 ½ out of 4 stars and you can also find cool stuff at www.spookshowentertainment.com .

Fishing Amy (Internet) – Justin Romine gives us a short film Grindhouse-style about a woman who is simply tortured, escapes, and picked up on the side of the road by another man who just happens to know who she escaped from only to become fish bait! Apparently this was a part of the “48 Hour Film Project” one year and I liked it! I give it 3 out of 4 stars. Go check out and support Mr. Romine at www.fatheadfilms.net .

Blinky (YouTube) – Thanks to Bootleg Tim Gross aka Tim Wilder sent me a link to this flick that involves a not so futuristic toy robot that listens and performs every task it is given. Of course when a rich boy gets everything he wants and takes his anger out on the robot ‘Blinky’, the toy robot just simple does what the kid asks of it… Which for this short film is awesome! Because the only thing missing is Tom Selleck and Gene Simmons with the bullets that follow you! The short film is from a filmmaker named Ruari Robinson and I give it 3 ½ out of 4 stars.

The Time Guardian (DVD) – A low budget sci-fi film from Australia that was made in 1987 starring Dean Stockwell simply known as ‘Boss’ who runs the last city of humans in the future of 4039. His problem happens to bootleg Krull creatures known as the ‘Jen-diki’ that are cyborgs from underground that want nothing more than to crush all humans. So Stockwell’s character convinces others in charge of the city to go back in time to get away from the Jen-diki and have Carrie Fisher and bootleg mercenary dude go to early 1988 and prepare the area for the city’s landing and warn the locals of what’s coming… It’s not a great movie by any means but it is entertaining as you can see Stockwell and Fisher must have done this movie to fulfill a contract for the studio and put lackluster effort into a hilarious mostly unknown sci-fi action flick. Its Australian and for that it at least gets 2 stars.

Blast Vegas (SyFy Channel/DVD) – Its Spring Break in Vegas and Frankie Muniz’s friends just happened to disturb an ancient evil god by using an ancient sword and stabbing the earth. Now according to legend sand snakes start fucking people up with sand including John Landis and Joe Dante after they attempt to steal the sword at the beginning of the film. Sand snakes, spring breakers dying left and right, buildings falling apart, there is only one man to save them all and its bootleg Wayne Newton in the form of Barry Bostwick who puts in his best performance since Project: Metalbeast! Enjoy the film for what it is because it is fucking hilarious as I give it 2 ½ stars.

Deadly Force (VHS) – Its 1983 and Wings Hauser is a former LA cop who now does side work after being run out of Hollywood. But when he gets a call from an old friend after his granddaughter is killed by a serial killer, it’s time to return to a city full of people who don’t like you including his wife who still wants him to sign the divorce papers. The serial killer seems to be killing at random until Mr. Hauser finds a connection to the killings with a prostitute. If you are looking for a fun random unknown 80s action film you will be entertained with this action packed choice as I give it 3 stars.

We Are What We Are (DVD) – A subtitled film about a family of cannibals in Mexico. After the father of the family dies, the siblings begin to panic as they believe mother is just going to let them all starve and die. The film starts off slow and takes some time to build the storyline but as it progresses and becomes even more interesting as the brothers and sister question why they are different with no answer from their mother but still tries to right the right person that be eaten by them. This cannibal film is more story driven and may scare off the ADD horror person but stick it out as the climax of the film makes it all worth it as I give it 2 ½ stars.

The Last Stand (DVD) – Yeah bad ass ARNOLD maybe old, but the mother fucker still picks awesome fucking movies as this action flick has him playing a sheriff named Ray, in a small town in Arizona right outside the border of Mexico. Most of the town as gone away to watch the high school football team, meanwhile one of the most wanted drug lord cartel leaders has escaped FBI custody  and is speeding toward the small town in order to cross the border without issues. Ray gets wind of this when a local farmer (Harry Dean Stanton) is murdered and needs to deputize Johnny Knoxville and a drunken war vet to help stop this criminal from driving through his town. The gun fights are brutal, the car scenes are crazy and stunt filled, and ARNOLD plays his age and pulls off another great performance in a memorable action flick you will want to watch dozens of times. I give it 4 stars. 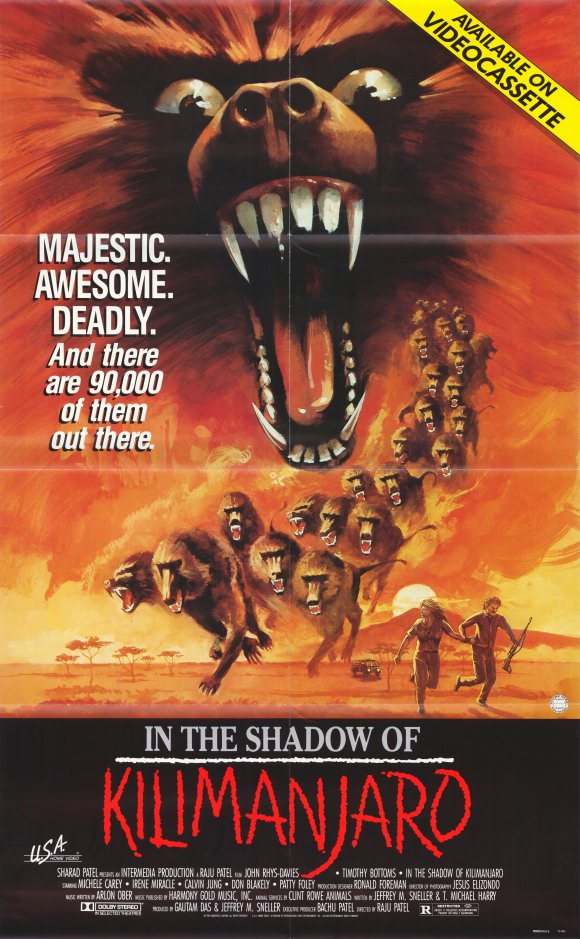 In the Shadow of Kilimanjaro (VHS) – A 1986 film that was based on a true story of 90,000 baboons in Africa during a ferocious drought of 1984 viciously attacked animals and humans. John Rhys-Davies is a man who is working on a mine that is suffering because the lack of rain. He is always at odds with the local wildlife expert who just wants to pounce on him if a wrong move happens to effect wildlife. Little do they know crazed baboons are fucking power workers, food trucks, a poor dude just trying to change his tire and he gets eaten inside of his truck? This film has some wonderful stock footage of stampeding baboons and you know if this film was made today the scenes with the baboons would have been all CG’d. It is a great 80s killer monkey movie that deserves a watch and a the special DVD treatment. I give the flick 3 stars.

You can purchase my latest book from Library of the Living Dead Press called, “The Big Ass Book of Gross Movie Reviews” at www.amazon.com .

Don’t forget you can also hear Kyle Poling and I talking about horror flicks on a weekly basis on the Bloodbaths and Boomsticks podcast at http://bloodbathsandboomsticks.blogspot.com/

Plus you can always go to the greatest T-shirt place online or if you are in Texas visit the store of “Fast Custom Shirts” where T-shirt Joe is the only place that you can purchase a Gross Movie Reviews t-shirt but also Cannibal Campout, Woodchipper Massacre, and Spookies T-shirts also!!!! Go to www.fastcustomshirts.com for details.