Colin (DVD) – A zombie film that dares to be different out of the UK but instead bores the living shit out of trying to stay awake for the entirety of the film. The story follows a dude who gets bitten during a zombie outbreak and wonders London. Biggest problem is nothing fucking happens! And if wasn’t enough to annoy me I know this will annoy some horror fans as the filmmaker seem to enjoy the shaky cam. So put drugs that help you sleep away as this movie will literally put you in a coma. I could not drink enough beer to make this film worth wasting my time on again. I give this useless zombie film 0 stars.

The Fearmaker (VHS) – The film is mostly widely known for its other title ‘The Mutations’ from 1972 that stars the legendary great one, Donald Pleasance who plays a scientist who believes he knows how to speed up evolution. What makes the film a lot of fun besides it looking a lot like the historical film ‘Freaks’ or at least heavily influenced? And Dr. Loomis is half-in-the-bag the whole film! Anyway, Pleasance plays a professor who believes mutations are what help evolution along and he also believes the next step is plant and human together. The professor uses a disfigured aka elephant man look-a-like from the freak circus show to capture live patients for his experiments and in return he will cure the elephant dude. But the local freak circus is pissed that too much bad attention is coming their way and they no longer feel safe and must do something about it. A great mess of a 70s horror film must watch with one of the greatest actors ever in Donald Pleasance. I do not believe this film has much of a release in any format but can be found on YouTube and other movie websites for free. I give the freakish film 2 ½ stars.

Stitches (DVD) – Let me just tell you now this as made it onto the best horror film list of 2013 behind ‘John Dies at the End’. We meet Stitches the clown in an Irish town where he is banging a random hottie doggie style until he remembers he is late for a party where he has to entertain 10 year olds. When Stitches arrives he meets Tommy and friends who are not kind to Stitches the clown. A lot of Stitches tricks are boring to the kids so Tommy hits Stitches in the face with a soccer ball causing him to fall and take a knife to the skull in the dishwasher. Thus sending ten year olds scrambling and Tommy scarred for life or until 16 when he is still having nightmares of Stitches at a clown funeral where they some special ceremony. But not to give too much fun away Tommy’s friends have decided it’s time for him to have a birthday party for the first time since the incident and everyone is invited, including an undead clown. Stitches the clown was able to combine gore and bad jokes that make you remember the good old days of Freddy Kruger of the 80s. The slasher film is gory as hell, funny, well written, and make you stand up and scream for sequels! I give it 4 stars. 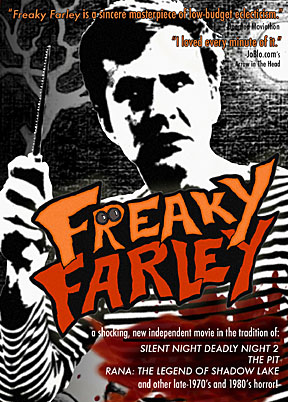 Freaky Farley (DVD) – A 2007 independent film from the same people that gave us the odd but fun independent feature ‘Don’t Let the Riverbeast Get You!’ has an earlier independent film that involves a man named “Freaky Farley” where he is a small town Peeping Tom and his father is a famous radio host. Of course Farley’s father is hard on Farley and Farley develops huge father issues which are a major plot point of the film. But when Farley meets a girl a lot like him named Scarlett his world is complete or so he thinks until he finally goes to the cabin his father has not allowed him to go to since his mom’s death. A well-produced film, but very rough around the edges. But after seeing this film and the progress in the Riverbeast film you can see the filmmaker started early on creating his own little alternate world that continues through the films but enjoys using the same cast of actors in different roles which can help create exciting and good films in the long run. So independent movie fans start visiting their website at www.shockmarathons.com and start supporting as I give this flick 2 out of 4 stars. For the love of god people they have fucking Trogs in this flick! And that is awesome in my opinion!

Leaf Blower Massacre (DVD) – A film after my heart and it has a tagline: “When autumn arrives no one survives!” I am all in then. With the cool vintage horror box art, the killer looking a lot alike the ‘Nailgun Massacre’ killer, and the killer takes time to plug in the leaf blower to kill one of his victims its cinema gold. The only thing that upset me about the film is it being a short film. Now there is no way I believe it could go 80 or 90 minutes but I was hoping a little more than 14 minutes. But it’s well worth the effort because the filmmaker Anthony Cooney is also a ‘Nailgun Massacre’ fan and leaves it with the potential of a sequel. And folks that is all I can ask for in a film like this. Terry Lofton would be proud as I give the short film 3 ½ out of 4 stars. For more info on the film go to https://www.facebook.com/anthonycooney187?fref=ts .

Long Weekend (DVD) – A lost and forgotten couple vacation film that goes bad. Like ‘Day of the Animals’ of bad. An Aussie couple who apparently are a half step from divorce have ventured out to a beach near some woods for a camping getaway to maybe try and patch things up? As fixing the relationship goes downhill quickly strange occurrences and odd behavior from the animals cause tensions to be worse. The film has radio reports and a TV report that might lend a little bit of a clue on what might be the problem but the film never directly points out this is the reason for the weirdness of the animals or strange occurrences. The 1978 film can drag a little at certain points but has a great ending that makes up for it. The DVD is available here in the US and you can find the film on YouTube as I give the movie 2 stars.

Plus you can always go to the greatest T-shirt place online or if you are in Texas visit the store of “Fast Custom Shirts” where T-shirt Joe is the only place that you can purchase a Gross Movie Reviews t-shirt but also Cannibal Campout and Woodchipper Massacre T-shirt also!!!! Go to www.fastcustomshirts.com for details.