Crossbearer [The Hammer of God] (DVD) – If you like your independent horror films filled with sex, drugs, and violence? This film is right up your alley. But that isn’t the only thing enjoyable about this horror sleaze picture… Heather is a stripper who has a shithead for a boss, gets shit from the person whose house she stays at, and hopes for just one break so Heather and her girlfriend are able to fly off to Italy and start over. She has a dream and she might have gotten a break when she arrives to work late and her boss wants her to do this drug drop-off to prove she still wants the job? What the shithead boss doesn’t know is Heather is going to exchange the drugs for money of course but she isn’t coming back. The drop-off is at an abandoned warehouse where hobos and drug addicts hang out from time to time until an unnoticed figure only known as the ‘Crossbearer’ wonders the dark and dank location reciting verses from the bible and he is off his rocker. The sex, drugs, and awesome violence is fun but the religious nut ‘Crossbearer’ just happens to be a very interesting piece to the film that doesn’t get enough screen time for my liking. This character and his storyline makes this fun sleazy horror film stand out from most independent horror films and makes me want a sequel! The DVD comes with lots of extras including a 2 ½ hour making of featurette. This glorious violent film can be found at www.adversaryfilms.com as I give it 3 out of 4 stars.

X-Treme Fighter aka Sci-Fighters (DVD) – Don the Dragon Wilson and his son get stuck inside a virtual reality game his father made and only Lorenzo Lamas and Cynthia Rothrock can help along the way for the father and son duo to find a way out. No words can possibly describe what I actually watched, but if I had too, here it goes: Imagine if Charles Band and Albert Pyun decided 13 years after the film Arcade they would remake it with B-action stars and release it on DVD… Wait, did your head explode? I give it 1 ½ stars and give you the viewer 4 stars if you can make it all the way through without wanting to keep your thumb on the fast forward button. 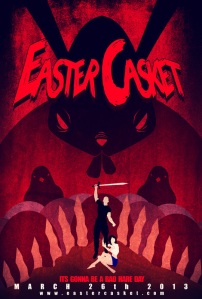 Easter Casket (DVD) – Perhaps the craziest independent holiday horror film I have seen in the past year or two but it also came the same man that gave us “The Puppet Monster Massacre”, so I knew what to expect. On a $3000 budget Dustin Wayde Mills goes out of his way to give you an Easter film will never forget. Father Asher (Demon Slayer) is a chosen one who helps protect the church and is called to duty when the Easter Bunny just happens to be the anti-Christ and is pissed that the church would like to take all the bunny shit out of the holiday. But that just isn’t enough for Mr. Mills he puts together a gracefully hilarious film of nun-fucking, inter-species sex that leads to the anti-Christ growing Godzilla-like, killer peeps, and the Mega Pope! You heard me right Mega Fucking Pope. I was shouting “Mega Pope” away all day during Easter! Apparently we have the answer to who the church answers too and it is the Mega Pope that just so happens to resemble Galactus in some odd way or my mind just could not contain absolutely nutzoid fun horror film I just witnessed. Thanks to Mr. Mills I now know not to piss off the Easter Bunny especially if I am a nun. Then you just get raped, inter-species style. I give this flick 4 out of 4 stars and available at www.eastercasket.com . Let’s also not forget the great performance from upcoming actress Janet Jay as her actions teaches you never eat the wrong candy so Mega Pope away!

The Collection (Blu-Ray) – The sequel to the highly popular film “The Collector” that surprised most horror fans a couple years ago opens up with a couple girlfriends going to an underground party that just happens to be the place for The Collector to set his traps. Instead of a couple people The Collector wants to kill everyone all at once after humongous lawnmower trap is set in motion after Emma Fitzpatrick’s character finds Josh Stewart in a red trunk still alive. Mass beheadings and blood splattered by the hundreds of gallons follow. But this time Josh Stewart’s character is able to escape but The Collector takes another possible victim with him. Stewart’s character is next shown in a hospital where he is trying to heal up but soon rushed out to help a group of people go back to where The Collector took him to save the girl. Good story and I enjoyed the film but sorry horror fans there is no way they can top the first film but I did enjoy the fleshing out of The Collector and what he is all about without ever giving away who exactly he is. Horror fans do not shy away from this film as its bloody, exciting, and moves the story along without giving away much about The Collector. I just don’t believe no matter what budget or actors for the sequel the filmmaker wasn’t going to top the first film. Just glad he was able to give a sequel to make horror fans scream for more. I give the film 3 stars.

All American Zombie Drugs (DVD) – A horror/comedy that can be misleading about two young drug heads who have used every possible drug and starting to find drugs are not as good as they use to be. Out of work and out of money they decide it’s time to start making their own drugs to sell but they need an investor. Along comes a hot rich Goth chic and they are in business or until they find out the stuff is fake. Without skipping a beat they go to the Google machine or that inter-web thingy and look up how to make drugs with household products. Once one of the characters tries their own product he is sent into a deep coma which makes him believe the drugs turn his friends into zombies. It’s a funny ass independent comedy but to call it a horror/comedy is borderline call at best. Just because you have two scenes of zombies attacking characters and one of your main characters keeps seeing and talking to his dead brother while he is high doesn’t make it a horror/comedy, maybe a fun dark comedy as the filmmaker uses ‘zombies’ in the title to maybe get more attention from a distributor or movie fans. Smart move for the short run but possibly hurt the comedy film in the long run. It may not be a horror film in my eyes but I still enjoyed the overall product and give it 2 ½ out of 4 stars. The film and more info about it is available at www.midnightreleasing.com .