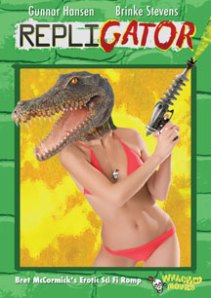 Repligator (VHS) – A fun monsters and boobs no budget from 1996 starring Gunnar Hansen and has an appearance from genre favorite Brinke Stevens. The government is giving funding to scientists to develop a replicator machine or transporter machine. They go back and forth on what they want to exactly call it throughout the film. But anyway the government wants to see it work and their volunteer is not quite ready what is about to happen to him next when he is transported to the next room only to come through the door as a woman. Apparently the machine stretches the DNA causing men to become women, who in return become topless women with alligator heads if they have sex! Go ahead and read that again… This film is all about the boobs and gator heads as it is also up to these topless women/men to fix the machine to stop the chaos. Reviewing the film does it no justice, it needs to be witnessed! I give it 2 ½ stars.

Eyes of the Chameleon (VHS) – Independent film icon Ron Atkins gives you this dramatic twisted film about a lovely lady named Sara who believes she is being chased by someone? A possible serial killer but as the story unfolds it becomes clear Sara truly is unsure what exactly is going on until the very end. Atkins uses Vegas to his advantage as the back drop for wonderfully twisted independent horror film. I give it 2 ½ stars.

Warlock 3: The End of Innocence (DVD) – Julian Sands didn’t make it this time out as the warlock but not surprising since this sequel comes about seven years after the second film. Bruce Payne takes over in this sequel that really has nothing to do with the other two films. Ashley ‘Hellraiser’ Laurence inherits a house that has been in her family. So Ashley and some of her friends go out to the old house that has a strange history and has been empty for the past 50 years. Bruce Payne has just made his way out of the catacombs of the house to cause havoc among the college kids. The movie has no charm, no thrill, boring as shit, as nothing and seems to be a troubled film that was named ‘Warlock  3’ for the mere reason of cashing in which I doubt. I give it 1 ½ stars. 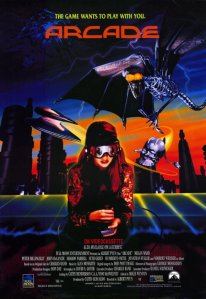 Arcade (DVD) – Alex, her boyfriend Greg, and friends go to the local arcade “Dante’s Inferno” to check out the latest video game ‘Arcade’. Arcade isn’t just any new game; it’s a virtual reality game that changes and learns with each game played. When a level is cleared it adjusts. But the teenagers think it’s stupid until the expert Nick sits down and plays and becomes scared shitless from playing Arcade. The kids are given the tester home game versions of the new virtual reality game while Alex’s boyfriend begins to play and disappears into the game. Worried Alex waits outside, then at home calling his house after midnight looking for him. When she arrives at school the next day not only to find out Greg didn’t make it but most of her friends didn’t make it she begins to suspect there is something more to the new game? Personally I have always thought the effects were garbage but because it was a Full Moon film I had to see at least once when it was released for the first time almost 20 years ago. Didn’t like then, don’t really like it now but remembered it being delayed for a year or two before it was released while other films like Brainscan and The Lawnmower Man beat it to the punch. But rewatching this flick I cannot believe the cast for this Albert Pyun flick! Besides the very sexy Megan Ward and a young looking Seth Green but there is: Peter (A Christmas Story) Billingsley, Bryan (soap opera star) Dattilo, Sharon Farrell, Don Stark and the screenplay was written by David S. Goyer. I’ll be honest I’m surprised that Charles Band does not try to put this film on the front page of his website screaming the star power of the film? But there is a good chance like me he possibly dislikes the film because of its bad effects… I give the film 1 star.

Sinister (DVD) – Ethan Hawke is an author who has written some horrific books in the past and when he writes them he usually moves to the area he is writing about for a certain amount of time to soak in everything to put it in his book. Problem is he hasn’t anything worth reading according to most including his wife for the past decade. Hawke’s character believes the new house he and his family have moved into is different this time around especially when he finds a box of mysterious Super-8 films. These films depict slayings of families over the years in different areas and all have a missing child that is never found. The films soon suck Hawke’s character deeper and deeper into the mystery of whom is doing the killings that his family begins to be haunted by visions of the family that was killed outside of the house he just purchased. Love horror films that build like this did and had a bonus of making the killer an unusual suspect, since kids are usually the unwritten rule of it can’t be them in recent years. The film can be a little over dramatic and lack a little gore but is a fun film that can suck you into the storyline quickly. I give it 2 ½ stars.

Mama (DVD) – I loved the beginning of the film which sets everything up. Dad is about to do a double murder then suicide with his two young girls after they are in an accident deep in the snowy woods. But a dark force comes out of nowhere and breaks his neck and steals him away! From there its five years later and the brother have not lost faith in finding answers or finding his brother or nieces alive. The young girls five years older and living in the wild of sorts are found and have trouble adjusting to society when their uncle fights for the custody of them and that’s when strange things begin to happen. Such as the youngest girl still talking to an invisible woman named ‘Mama’ except to her and her older sister who has adapted better than her younger counterpart. A little creepy and scary for the horror movie beginners and has a letdown of an ending but was still glad I got to watch this flick. I give the flick 2 stars. 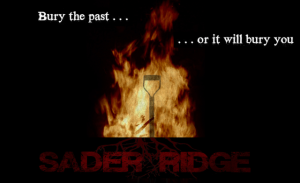 Sader Ridge (DVD) – A cute college girl named Sam has inherited a house that she remembers nothing about from a family she doesn’t know because she was adopted. Every time she has asked about her family before the Harris’ who are her legal guardians they just get upset. So Sam and three friends decide to take the ride to the house and try to help Sam sort out a past she knows nothing about. Things become strange when a man named Eric, who claims to be the caretaker and knew Sam as a young kid decides he can help them investigate the home and land. After Eric shows Sam around she begins to have lots of weird visions of her friends breaking down crying, saying prayers, and screaming verses of the bible as they begin to beat another. Now, Sam is unsure what’s real and what’s not and is unsure of trusting Eric even though he claims to be her best friend when they were five. Sader Ridge is a dramatic slow burn that is driven by Sam’s character unveiling her past in order for her to try and understand how she got adopted. The independent film was done for $11,000 by three dudes who just recently started the production company ‘The October People’. And I have to say it was money well spent on their first feature length project. The film is more of a thriller than horror but still effective in that slightly disturbing good way. I give this independent film 2 ½ out of 4 stars and the new company would like your support at www.facebook.com/saderridge .

You can purchase my newest book from Library of the Living Dead Press called, “The Big Ass Book of Gross Movie Reviews” at www.amazon.com .

Also let’s not forget I’m a part of “The Greatest Show Unearthed”… For more details on this show go check out and support at: http://www.facebook.com/BarnabusBaileyGSU and http://www.barnabusbailey.com/

Don’t forget you can find me at Horror Realm this March 15th thru March 17th, 2013… Check for details on the convention at www.horrorrealmcon.com .